Director of Photography Art Adams knew he wanted to look through cameras for a living at the age of 12. After spending his teenage years shooting short films on 8mm film he ventured to Los Angeles where he earned a degree in film production and then worked on feature films, TV series, commercials and music videos as a camera assistant, operator, and DP.

Tim Dashwood is the founder of 11 Motion Pictures and its sister companies Dashwood Cinema Solutions and the Toronto-based stereoscopic 3D production company Stereo3D Unlimited Inc. An accomplished director/cinematographer, editor and stereographer, Dashwood’s diverse range of credits include numerous music videos, commercials, documentaries and feature films, as well as S3D productions for 3net, DirectTV, Discovery Channel and the National Film Board of Canada. He also specializes in the previsualization of live action fight/stunt scenes for large-scale productions such as Kick-Ass, Scott Pilgrim vs. The World and Pacific Rim. Recent film credits for cinematography include the films Air Knob, Bob, The Killer and Academy Award Winner Chris Landreth’s Subconscious Password 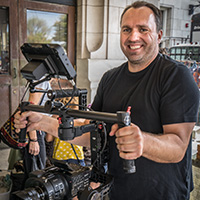