MELVILLE, N.Y., September 24, 2020 – Canon U.S.A. Inc., a leader in digital imaging solutions, today announced the launch of a remarkable new addition to its UHDxs series of 4K UHD broadcast portable lenses: the CJ20ex5B. Within this category of portable lenses, Canon presently has two models that are very wide-angle (4.3mm at their wide end) and four models that are telephoto (and consequently constrained in their wide-angle settings). Between these two groupings, Canon applied the latest in contemporary optical design technologies to empower the creation of a dynamic and versatile new lens that would simultaneously extend both extremes of the focal range – a wide 5mm and a telephoto 100mm – a game-changing focal range that is tailor-made for coverage of modest-sized sports venues such as basketball, boxing and more. Documentary capture and newsgathering will also be further empowered. 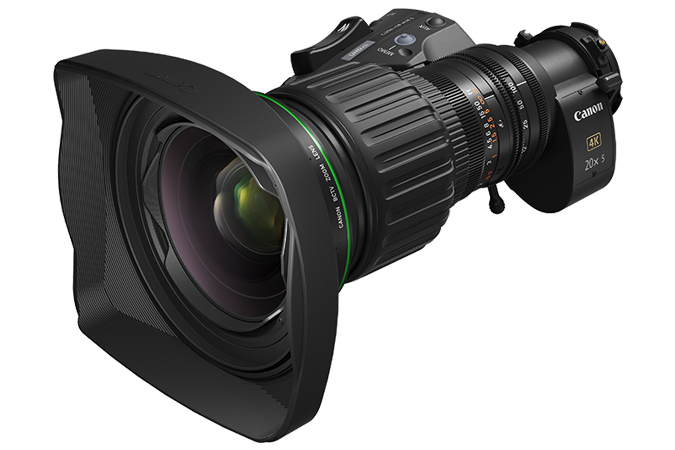 “As the demand for high-quality 4K UHD lenses for sports and newsgathering continues to grow, Canon strives to develop and implement the best possible optical design technologies to meet the needs of end-users,” said Tatsuro “Tony” Kano, Executive Vice President and General Manager of Canon U.S.A.’s Imaging Technologies & Communications Group. “The new CJ20ex5B lens provides the optical excellence that makes Canon a leader in broadcast lenses, and helps to round out a seamless lineup of 4K UHD portable broadcast lenses. We look forward to seeing the multitude of ways professionals will use this versatile lens.”

The new lens, which is designed to be used with broadcast cameras that have 2/3-inch sensors, delivers outstanding 4K UHD image quality in a lightweight (4.76 lbs.) and compact form factor (9.9 inches long) that empowers agility in shooting. The lens also features a built-in 2x extender that can expand the zoom range up to 200mm. The ergonomics and digital servo operational controls of the lens are similar to Canon’s current lineup of portable zoom lenses, providing users with maximum mobility in a variety of shooting situations.

The CJ20ex5B lens achieves a high-level 4K UHD performance across the entire zoom range thanks to Canon’s proprietary optical design technology and coatings, which incorporate materials such as UD and Super-UD lens elements, and a fluorite coating, that help to reduce chromatic aberration and minimize ghosting and flaring. Focusing fluctuation has also been decreased due to an improved inner focusing system that improves resolution in the periphery areas of the screen. In addition, the lens supports the wide color gamut approved by the ITU-R BT.2020 UHD broadcasting standard – all features that are essential to HDR/WCG imaging.

The CJ20ex5B lens also boasts enhanced operational control over its previous models. The quick power-on button allows the value encoder to initialize at the same time the lens is turned on, enabling users to operate the lens more quickly. The lens also features an on-board display that provides users with the ability to access and adjust various settings rapidly. It is also compatible with Canon’s recently announced G-Series zoom and focus controllers, which deliver increased control of zoom and focus speeds and range.

The Canon CJ20ex5B 4K UHD Portable Zoom Lens is scheduled to be available early in 2021.* For more information about the CJ20ex5B, and Canon’s complete line of innovative broadcast lenses, please visit usa.canon.com/broadcast.

* Specifications, availability and prices are subject to change without notice. Actual prices are set by individual dealers and may vary.