Recently:
You are at:Home»Articles & Reviews»Acquisition»Canon DV / HDV»Frequently Asked Questions about the Canon XH G1 and XH A1 HDV Camcorders 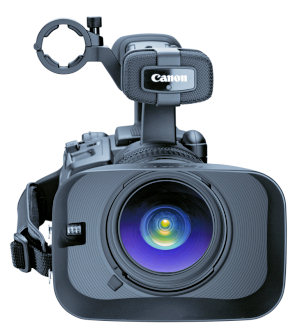 This page has been set up in anticipation of some of the most common frequently asked questions about the Canon XH G1 and XH A1 High Definition video camcorders. If you don’t see your particular question answered here, be sure to check out the XH Skinny and all of the articles in the XH Watchdog Articles section. Of course, there’s also our message board in the DV Info Net Community discussion area, where you can intereact with other members in a professional, moderated and noise-free environment. Registration is free; come in and join the discussions!

Q Why are there two camcorders, and what are the differences between them?

A The only difference between the XH G1 and XH A1, is that the G1 offers uncompressed HD output over Serial Digital Interface (SDI) as well as GenLock input and Time Code input and output. The A1 doesn’t have SDI, GenLock or TC input and output. Other than that, they’re exactly alike. I suppose Canon is offering two different models so that if you need SDI and GenLock, etc., then it’s there on the G1; and if you don’t need those specialized features then you don’t have to buy them, you can get the A1 instead.

Q Do these camcorders replace the Canon GL2?

A No. The GL2 is not being replaced by the XH series camcorders. The GL2 along with the XL2 still compose the current Canon line of 3CCD standard definition DV camcorders.

Q How much do these XH camcorders cost and when are they available?

Q What do these camcorders have in common with the XL H1?

Q What do the XH cameras have that the XL H1 doesn’t?

A The XH series camcorders include a few features not found on the XL H1, such as a new, very fast autofocus technology called “Instant AF” which utilizes a passive IR sensor. On the XH G1, the HD and SD output over SDI embeds audio and Time Code along with video, whereas SDI output is video only (without audio or Time Code) on the XL H1. The XH series camcorder lenses have manual iris control rings and a wider field of view compared to the XL H1. Some of their custom preset image controls have an adjustment range of +50 to -50 (compared to +9 to -9 on the XL H1). Master RGB adjustment at the CCD level is 140% greater than that of the XL H1. There is a new Sky Detail Control feature, similar to Skin Detail Control, and a separate six-axis color correction feature. The camera menu displays are customizable, and user-programmable function buttons which can be set up as desired, as an example for “shockless” adjustment of white balance, gain, or exposure.

Q What does the XL H1 have that these cameras don’t?

Q Does the built-in 20x HD lens on the XH camcorders have the same focal length as the stock 20x HD lens included with the XL H1?

Q Does the built-in 20x HD lens on the XH camcorders have the same aperture values as the stock 20x HD lens included with the XL H1?

Q Does the built-in 20x HD lens on the XH camcorders have the same Optical Image Stabilisation (OIS) technology as the stock 20x HD lens included with the XL H1?

Q What is the filter thread diameter of the XH series 20x HD lens?

A The filter thread diameter of the XH series 20x HD lens is 72mm.

Q What’s that thing next to the lens? It looks like a video light.

A The thing on the right side of the lens that looks like it might be a video light, is actually the eye of a passive IR sensor which is part of the “Instant AF” fast autofocus function. This device quickly measures large-scale changes in distance and contrast, and hands the results to a separate fine-scale AF processor for fast, precise tuning of autofocus. There’s a cutaway in the XH camera lens hood to accomodate the eye of the sensor. Instant AF can be switched on or off in the camera’s menu system.

Q Is there an upgrade program to add 50i and 25F frame rates to these cameras, like there is for the XL H1?

A Yes. It’s the same program. Owners of North American models can send their cameras in to Canon Service to be upgraded for added switchable capability of the 50i and 25F European frame rates. Likewise, Europeans can get their cameras upgraded to the added frame rates of 60i, 30F and 24F. This is not a dealer option. It’s available only to individual camera owners.

Q Are there XLR inputs on these cameras?

A In addition to the built-in onboard stereo mic, the G1 and A1 provide two balanced XLR audio inputs which are switchable between mic level and line level impedance, supply phantom power, individual attenuation, and allow manual level control via pots on the camera body. There is a dedicated headphone jack. The G1 and A1 are also equipped with an onboard mic clamp which is removeable.

Q I don’t see a battery on this camera. Where does it go?

A The G1 and A1 have internal battery wells; they accomodate any Canon BP-9xx series camcorder battery including the large BP-970G inside the camera body. The battery access door is on the back of the camera and the battery can be changed without taking the camera off of its tripod.

Q Speaking of tripods, does the Canon TA-100 tripod mounting plate work with these cameras?

A Yes. The Canon TA-100 tripod mounting plate can be used with the G1 and A1.

Q How much do these camcorders weigh?

Q Is this all you’ve got?

A This page is a work in progress… we’re just getting started here.