Recently:
You are at:Home»Articles & Reviews»Acquisition»Canon DV / HDV»The Watchdog’s Skinny on the Canon XH G1 & XH A1 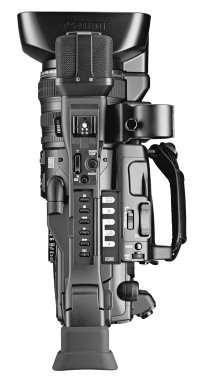 In brief… these two new Canon XH series HDV camcorders are the latest additions to Canon’s expanding line of High Definition video cameras. The XH series twins are smaller, lighter and less expensive than Canon’s flagship XL H1 camcorder; each delivers about the same performance as the XL H1 and they are nearly identical to each other with only one very important difference.

Both XH series camcorders share a lot of Canon technology in common with the older, larger XL H1. All three camcorders (XL H1, XH G1 and XH A1) utilize the same 1/3rd-inch 16:9 CCD block, as well as the same DIGIC DV II digital signal processor and 30F and 24F Frame modes in addition to standard 60i recording. All three cameras provide dual XLR audio inputs with manual level controls, still photo recording to SD memory card, and video image adjustments spanning 23 custom preset parameters. All three cameras include a 20x HD zoom lens with Optical Image Stabilisation, although the XH G1 and A1 lenses are built in and are not removeable like the XL H1 lens. All use the same Canon BP-9xx series camcorder batteries up to the BP-970G. All three cameras record 1080i HDV onboard to tape.

Like its big brother XL H1, the new XH G1 provides uncompressed SD and HD video output at 1.485Gbps over SDI (Serial Digital Interface), as well as GenLock input and Time Code input and output. The XH G1 is equipped with a single switchable BNC jack for Time Code, compared to the XL H1 which has two BNC jacks for Time Code.

The XH series camcorders include a few features not found on the earlier XL H1, such as a new, very fast autofocus technology called “Instant AF” which utilizes a special contrast and distance sensor. On the XH G1, HD & SD output over SDI embeds audio and Time Code along with video, whereas SDI output is video only on the XL H1. The XH series camcorder lenses have manual iris control rings and a wider field of view compared to the XL H1. Some of their custom preset image controls have an adjustment range of +50 to -50 (compared to +9 to -9 on the XL H1). Master RGB adjustment at the CCD level is 140% greater than that of the XL H1. There is a new Sky Detail Control feature, similar to Skin Detail Control, and a separate six-axis color correction feature. The camera menu displays are customizable, and user-programmable function buttons which can be set up as desired, as an example for “shockless” adjustment of white balance, gain, or exposure.

The XH A1 is in every way identical to the XH G1, except the A1 does not have the SDI, Genlock or Time Code BNC jacks that are on the G1. This and the price are the only differences between the two cameras. The XH A1 will sell for $3999. The XH G1 will sell for $6999. Both camcorders ship in Q4 2006, around October and November. 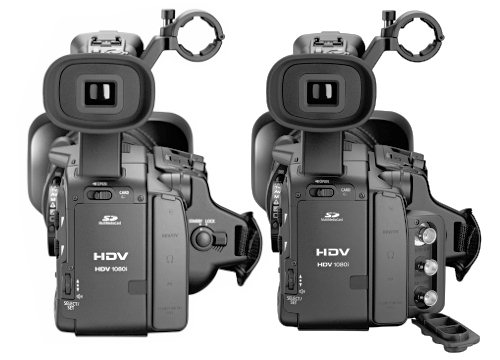 The only difference between the XH A1 and the XH G1, besides the price… the XH G1 (right) has the professional BNC jack cluster with SDI output, GenLock input and Time Code input and output. The XH A1 does not.