The Watchdog’s Skinny
on the Canon XL 1H

What is the XL H1?
Exploration of New Features
New 20x L IS Lens
CCDs, DSP and Frame Rates
Price and Availability
XL2 Specifications
Plans for the Watchdog

The Canon XL H1 does not replace the Canon XL2, which is still in production and will continue as Canon’s flagship 3CCD standard definition DV camcorder. What the XL H1 represents is an entirely new market for Canon as its first high definition video camera. It provides raw, format-agnostic uncompressed HD in the 4:2:2 color space at a throughput of 1.485 Gbps (Gigabits per second) over an HD-SDI (high definition serial digital interface) output conforming to the SMPTE 292M standard. HD video from the Canon XL H1 can be externally recorded in a variety of common HD industry formats including HDCAM, DVCPRO HD, and D5-HD. The HD-SDI output carries uncompressed video and sync data only (audio and timecode output are available through other jacks on the camera).

Although the XL H1 may be used in practically any video application, its primary target market is the professional broadcast arena seeking HD aquisition under $10,000. Support for shoots involving multiple cameras in both studio and on-location production environments is included in the XL1 H1’s feature set via genlock input and SMPTE timecode input and output. Its HD-SDI output allows integration into existing HD recording systems. The HD-SDI output requires a high grade coaxial cable, at least an 18 guage RG-6 type such as the Canare brand L-5CFB, for runs of up to 100 meters (330 feet). Component video output is also provided on the XL H1 (a D-Terminal interface cable is included with camera).

The North American version will record 1080/60i plus 30F and 24F frame rates. The European version will record 1080/50i plus 25F. At the individual’s customer’s discretion, each version may be upgraded by a Canon service center to become fully multi-format switchable 60i/50i with 30F, 25F and 24F. The upgrade may not be performed by dealers; only end-users are offered this option. The cost of the upgrade for the North American version is USD$500.

The XL H1 camera body chassis is a newer version of the Canon XL2 design, the only real difference between the two being a few millings to allow for new button and jack locations. The XL H1 and XL2 share the same 1/3rd-inch lens mount, lens centerline, and nearly the same weight; plus the same physical dimensions (with or without their standard 20x lenses attached). The XL H1 and its 20x HD lens are liveried in a black color with hammertone finish.

The new 20x HD video lens barrel shares the same outer dimensions, control rings, switch panel, 1/6 and 1/32 ND filters, lens hood and filter thread diameter as the standard definition 20x L IS video lens included with the XL2. The focal length of the HD video lens is also the same as the previous SD lens, with a 20x zoom ratio of 5.4mm to 108mm from twelve optical elements in ten groups. As in the previous SD lens, fluorite elements are used in the HD lens. The similarities end there, however. The 20x HD lens is a new optical design incoporating high-refraction glass with a special coating (called “SR” by Canon) to reduce image ghosting. The Super Range OIS (optical image stabilisation) is the same type as used before in the XL series — a bellows VAP (vari-angle prism) system with CCD feedback — however the OIS design is new, with improved frequency sampling. The focus and zoom preset features are brought forward to the HD lens from the SD version, with a new focus preset memory backup function. 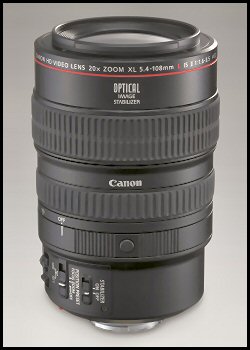 Since focal depth is more critical in HD, a newer, more accurate auto-focus algorithm has been incorporated in this lens. Other new features include a six-blade mechanical shutter for still image recording, and a user-controllable flange-back adjustment procedure for backfocus alignment, which can be performed manually or automatically via a camera menu option. The 20x HD lens also provides a numeric distance readout in the EVF display using an arbitrary number scale from 0 to 99. The number of lines of resolution for the 20x HD lens is not disclosed at this time; instead, Canon is stating only that the lens is perfectly capable of resolving to HD quality standards. This lens is backward-compatible with the Canon XL2, XL1S and XL1, but without the flange-back adjustment or the numeric distance readout features. The maximum aperture at the 5.4mm focal length is f/1.6. At full telephoto the maximum aperture is f/3.5. The minimum aperture value before closing completely is f/16. This lens uses a six-leaf iris. The field of view in 35mm still photo equivalents is 38.9mm at full wide to 778mm at full telephoto when recording in its native 16:9 aspect ratio.

Although the standard definition 20x L IS lens and other Canon XL video lenses can be mounted on the XL H1, Canon recommends against this practice as those lenses will not properly resolve for HD. The earlier EF adapter for the Canon XL series is of course fully compatible with the XL H1, and most of the Canon EOS line of 35mm still photography lenses may be used for HD, the caveat being a 7.2x multiplication factor which renders most all EOS lenses to an extreme telephoto field of view. There are no initial plans to offer the XL H1 body and 20x HD lens separately; for now they may be purchased together only as a full kit. Canon states that it will not comment on future products, leaving the question of additional XL HD lens options up in the air.

There are no plans to offer a 1/2-inch lens adapter; standard broadcast HD video lenses may not be used on the XL H1 without serious modification anyway, as the grip handles on those lenses would physically interfere with the grip handle built into the XL H1 body. The P+S Technik Mini35 converter and a variety of other emerging 35mm image converter solutions are indeed as viable with the XL H1 as they are on the XL2 and previous XL-series camcorders.

See this CCD, DSP and Frame Rates page for all the details.

Plans for the Watchdog

As the XL H1 becomes available for purchase and begins to penetrate the professional production environment, I intend to follow its usage as I have done for the past seven and one-half years for the XL1, XL1S and XL12. As owner’s reports and helpful operational articles are submitted, I’ll publish them here. Since the original XL1 Watchdog launched along with the first Canon XL1 back in early January 1998, it has accumulated more than 120 pages of content and is the largest online resource of its kind in the world. With your readership and participation, I expect it will only continue to improve and grow as the XL H1 is used and written about in the many months to come. Stay tuned! Lots more is on the way.