Here are the descriptions of the Atomos Shogun and Ninja Star mentioned in this video: 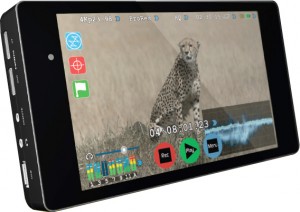 As a monitor, the Shogun features a 7″ IPS capacitive touchscreen display with resolution of 1920 x 1200. It is Rec. 709 color calibrated and supports multi-frequency operation (48/50/60 Hz) for monitoring and playback of a variety of input frame rates. An SDI loop output is available for passing the signal to an additional monitor.

The Shogun adds several new features over previous Atomos models, including custom 3D LUT support, Genlock In for multi-camera syncing, and improved audio handling with an included LEMO breakout cable for XLR audio. There are also a variety of onscreen tools to help you set up your shots, including a full waveform monitor, RGB parade display, vectorscope, focus peaking, and other framing, focus, and exposure assisting tools.

The Atomos Ninja Star Pocket-Size ProRes Recorder & Deck is a compact, lightweight HDMI recorder which stores video to CFast cards. It records up to 1080/30p resolution video via the HDMI output from capable cameras and uses edit-ready Apple ProRes HQ, 422, or LT codecs at 10-bit with 4:2:2 color sampling. 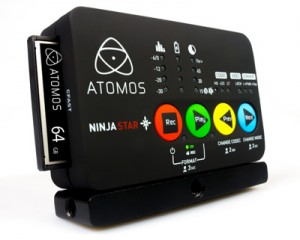 The Ninja Star offers similar recording options to Atomos Ninja monitor/recorder models, but strips away the monitor portion to create a lighter, more compact option. This is useful for users who want to keep their camera rig size manageable, or who already own an external monitor and want to add onboard ProRes recording. At only 3.5 oz, the recorder is even light enough for many quadcopter or multicopter setups.

The Ninja Star records to readily available CFast cards (generation one or later), which are highly reliable and offer fast read/write speeds. It also features time code and start/stop trigger support, an audio line-in, and an HDMI loop-through output for sending the signal to an external monitor. A battery and battery charger come included. For flexible mounting options, a mounting cheese plate is also included which provides 1/4″-20 threaded holes along the bottom and the sides.

Order the Ninja Star from AbelCine.