Some things for broadcast and news: the GY-HM850 and GY-HM890 are new shoulder-mount, 3-chip 1/3” HD camcorders in the mold of the 790, but using high-sensitivity CMOS sensors instead of CCDs. The 890 differs from the 850 by being dockable into a studio rig. 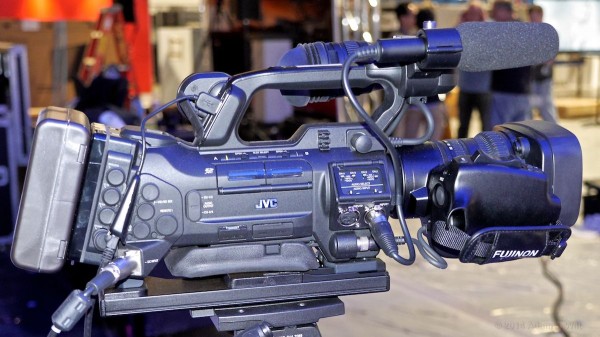 Both cameras record on SDXC cards in a variety of formats including a 50 Mbit/sec H.264 mode (which JVC’s Dave Walton describes as “virtually lossless”). The cameras incorporate JVC’s mobile production workflow with dual-codec recording and Zixi integration for robust live streaming under less-than-ideal conditions. The Zixi integration includes a “confidence monitoring” data readout in the EVF; the shooter can see the status of the streaming feed directly while shooting, instead of having to check an LCD readout or error lights on a separate transmitter. 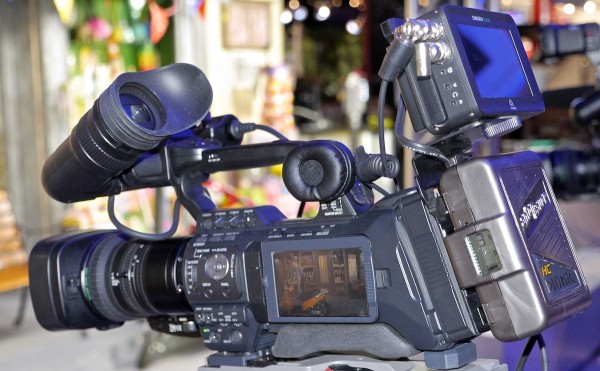 The cameras are available with a new 20x Fujinon zoom with autofocus and optical image stabilization – but you’re not limited to it; the lens is interchangeable: an 18x Fujinon with 2x doubler is a popular alternative for news shooters. 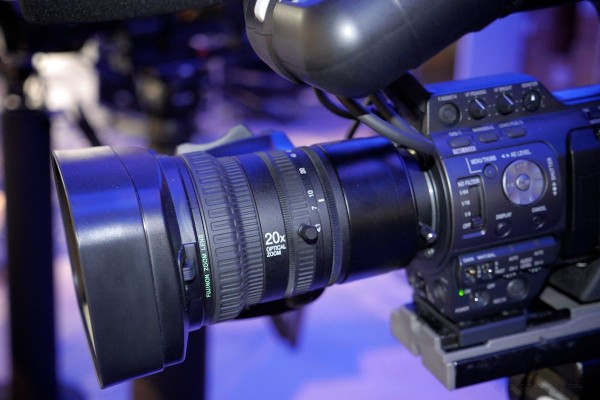 JVC is also announcing version 3 firmware upgrades for the 600 and 650 handheld cameras to add the 50 Mbit H.264 codec, and Zixi integration for the 650.

The ProHD line in general has seen widespread adoption in the broadcast community, with recent bulk purchases by Sinclair Broadcasting and the BBC, among others. According to JVC’s Craig Yanagi, over 114,000 ProHD cameras and decks have been sold worldwide so far.

One thing I’ve liked since the days of the 720p HM100 is the svelte chassis on JVC’s shoulder cams, with a very user-friendly control layout. That design pattern continues to the present day, with multiple refinements and a flippin’ huge flip-out LCD. 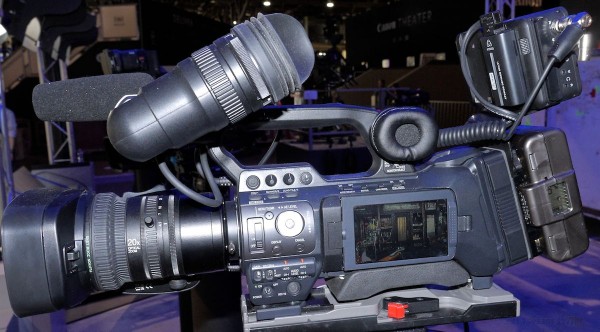 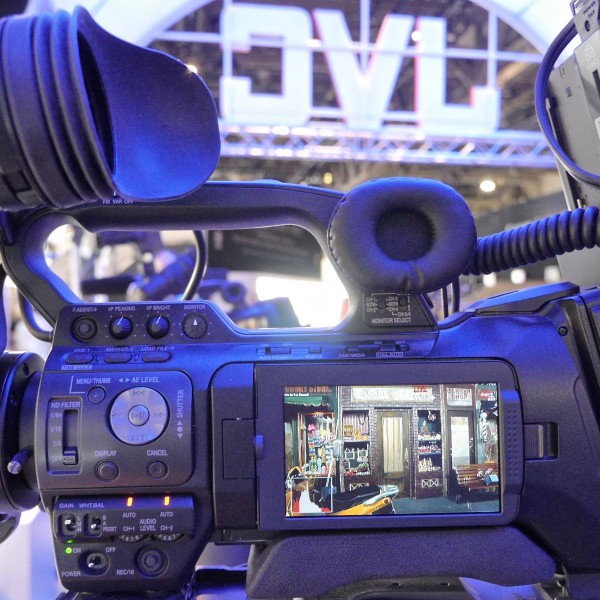 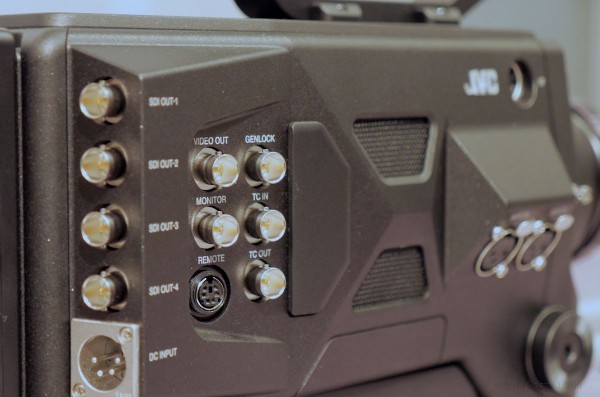 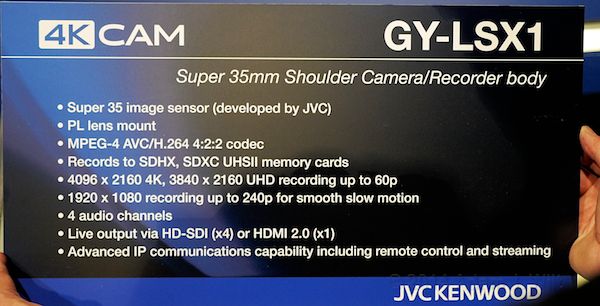 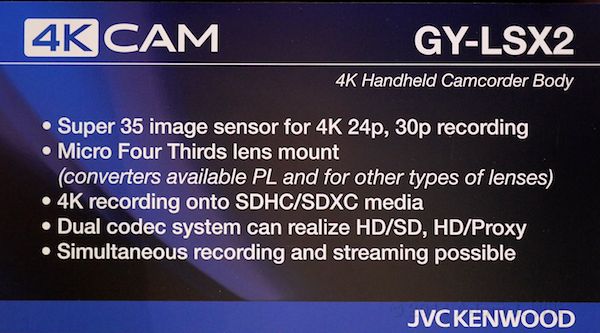 The cameras shown are “balsacam” mockups. When I eagerly hoisted the LX1 on Saturday, Craig Yanagi’s face went white, and he said, “oh, please don’t pick it up by the handle!” I immediately cradled the body with my other hand; the handle fortunately did not come off, and I narrowly avoided being responsible for breaking a camera before it had even been built!

There are also two 4K Super35mm single-sensor block cameras, a 2-piece “mini camera” and a gimbal camera system. These also use MFT mounts. 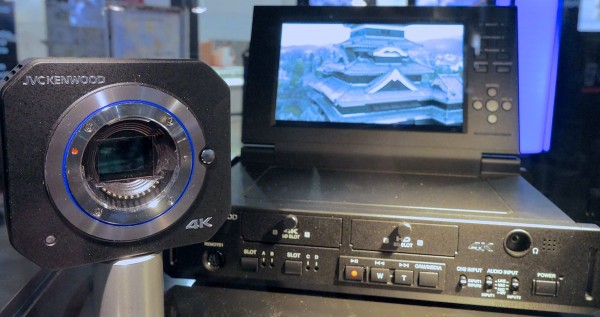 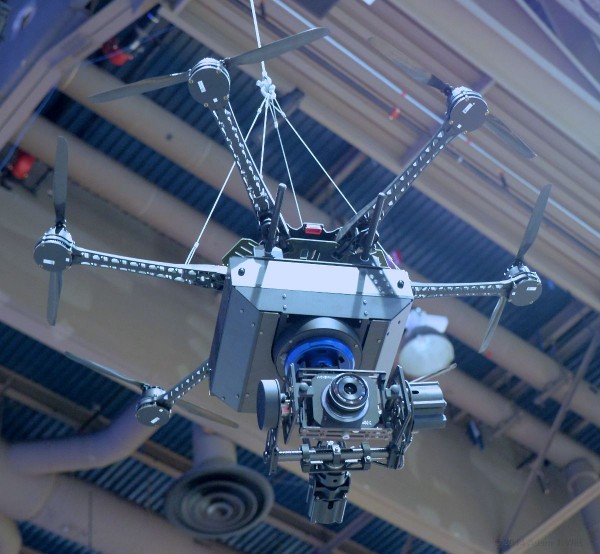 Prices and delivery times for these 4K cameras were not available on Saturday when I visited JVC. More information (on these, the HM850/890, and the other NAB announcements) should be available on JVC’s 2014 NAB Quick Reference website.

You’ll see “JVC KENWOOD” in the booth and on the signs; JVC and Kenwood merged in 2008 – 2011, and now the branding is being similarly integrated – hence my joke on Saturday about “the company formerly known as JVC”.

Disclosure: JVC let me prowl the booth Saturday, as long as I didn’t spill the beans before the show opened on Monday. JVC did not provide any compensation or other considerations in return for a writeup.