I contacted Illya Friedman of Hot Rod Cameras, who appears in one of Veydra’s videos, and he confirmed that the project was legitimate: he’s had a prototype of one of the lenses on a projector, and waxed enthusiastic about its color, breathing, contrast, and sharpness. He also spoke highly about the build quality: “Veydra lenses are all metal and glass, no plastic elements.  Mechanically they are closer to Ultra Primes than they are to Canon L series.”

Lens builder Matthew Duclos, who also has a cameo in the Veydra video, has a great overview with more tech specs, including a comparison with the Voightlander Nokton 25mm f/0.95.

I wrote Ryan Avery, the chap behind the Kickstarter project, and asked him for more details.

AJW: What’s the story behind these lenses; when did the project start?

Ryan Avery: I’ve been working with Jim Zhang, the optical and mechanical designer of Veydra, for many years. Jim and I always wanted to work more directly together on a project but never found the right product. We started talking about this project about a year ago and really fired it up after I started my company Convergence Products last May.

AJW: Whose fault is it, mostly: yours? Jim Zhang’s?

Ryan Avery: Veydra Mini Primes are designed optically and mechanically and manufactured by Jim Zhang. I have spent the last few years talking to filmmakers about lenses and what they want in a cinema lens. We both had the idea and used each other’s strengths to make it happen.

AJW: What was the spark of insight (or ongoing irritation) that launched the effort?

Ryan Avery: I am an active user of Twitter, which I use to keep in touch with lots of filmmakers around the world. Every week I would see people posting images of their BMPCC cameras with all kinds of gear and these HUGE lenses strapped to them via an adapter. I decided there had to be a better way, and purpose built lenses appropriate to the camera size came to mind. I like to think we are solving a problem most didn’t even know they had. 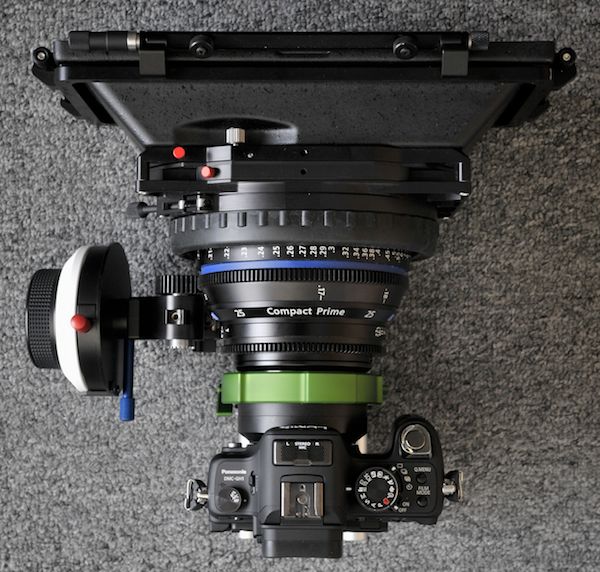 BMPCC clinging on for dear life on a Nikon full-frame 70-200mm zoom.

AJW: I see Illya Friedman and Matthew Duclos in your demo vid. What roles have they played in this saga? Any other “celebrities” involved that people should know about?

Ryan Avery: Matthew Duclos and Illya Friedman agreed to appear in our video as they both saw a need for this project to become a reality. Both were heavily involved in feature set specification, testing of early prototypes, and they will be offering sales and service on these lenses after the Kickstarter is completed.

I have known Vincent Laforet for a few years now, and he gave us lots of advice early on in what he wanted to see in the Veydra Mini Primes. We listened and Vincent was also kind enough to officially back our Kickstarter as his vote of confidence in our story.

AJW: Can I get a thumbnail sketch of your background? Of James Zhang’s? Other products you two have had your hands in that people might recognize?

Ryan Avery: I have been working in camera shops since I was 15 years old. I have always enjoyed cameras and filmmaking as a hobby and as my profession in the sales and marketing side.

I joined Schneider Optics in 2007 and basically flew around the country talking to prominent members of the filmmaking community and developing lenses and filters for top level cinematographers and amateurs alike. I was involved in the market research and design specification for the Schneider-Kreuznach Cine Xenar and Xenon FF Prime lenses. I also worked very closely with the late Bob Zupka at Schneider Optics on several prominent motion picture filter projects as well.

More recently I have designed my own products like the Revar Cine Rota-Tray which is a low cost high quality rotating polarizer for 4×5.65 matteboxes.

Jim Zhang has over 20 years design experience for major brands such as Century Optics, Chrosziel, and 16×9. Jim originally joined Century Precision Optics in 1993 and left to start Zhang Optics in 2000. Zhang Optics has produced many common popular optical adapters marketed under several brand names since 2000.

AJW: Where are the lenses being built?

Ryan Avery: Veydra Lenses are manufactured by Zhang Optics in Shanghai China. We do some finishing touches and packaging here in Los Angeles.

AJW: How about construction details: brass mounts and aluminum bodies I understand. Any unusual and noteworthy details as to materials or assembly? Any special glass (fluorite elements; aspherics, etc.)? The glass shows a rich orange color in some of the Kickstarter pix; anything folks should know about coatings? 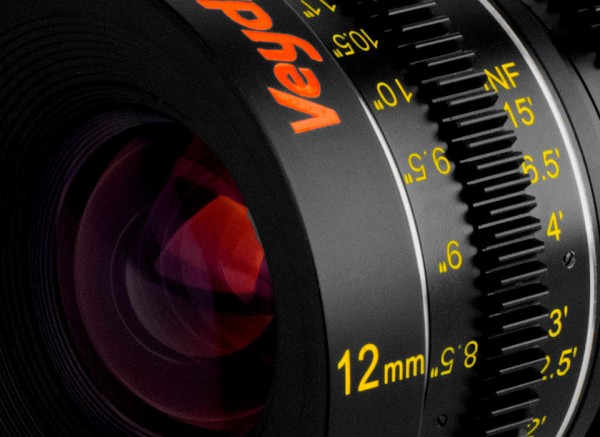 AJW: Clearly these things have been in development for a while, and it costs a lot more than $50K to design, tool up for, and build a set of five cine primes. So why a Kickstarter project so late in the game, and why for such a (comparatively) small amount?

Ryan Avery: Yes, the development costs have been greater than what we are asking for on Kickstarter, however we really wanted as many people to get their hands on these lenses for an affordable price.

Kickstarter enables us to tell our story, and have everyone be a part of our story from the beginning. We feel that we would not have been able to offer such a low introductory price and get people excited about our revolutionary idea without a crowdfunding platform like Kickstarter.

If we are able to raise more than $50K in the Kickstarter, then we will be able to make more focal lengths (including wider lenses) at a faster rate than a traditional product launch.

AJW: Those chromed accents on the leading and trailing edges of the focus barrel: aren’t they kinda flashy for serious cine lenses?

Ryan Avery: Yes, but they serve a purpose. We added the small chrome V channels there for a reason. Every camera has a slightly different flange focal depth, which would have been nearly impossible to design for perfect focus marks every time. We added the chrome V channel there so people can paint in their own exact marks for their camera if they choose. If a customer doesn’t want to do that, then they can just use the wider witness marks we provide on the lens barrel.

AJW: The Kickstarter page mentions “brass plated mount” in a couple of places. Surely you mean “plated brass mount”, don’t you? It’s a brass mount with a hard chrome plating, not a mount with brass plating, isn’t it?

Ryan Avery: Thanks for pointing that out. They are plated brass mounts and we will fix that. (The video show stainless steel mounts, but we changed the mount type after we shot the video for manufacturing reasons.)

Also note that these lenses feature adjustable back focus via removing a couple screws on the focus scale and you can slide the infinity mark to your camera’s flange focal depth. I believe that is a first in cinema lens design and will overcome the the varied mount manufacturing tolerances of many cameras.

AJW: Is there a “mission statement” for these lenses?

AJW: Where does the name “Veydra” come from? And how will any Eric Frank Russell fan not think of his honorific term for an adult Martian (“vedra”)? ;-)

Ryan Avery: Veydra is the product of the Greek work “Phae” which means Bright. The name came from our friend Phil Holland of phfx.com. We wanted something simple with five or six letters, and Veydra was perfect.

We have been getting a lot of SciFi fan questions, so in our opinion the more association the better!

At $900-$1200 apiece, the Veydras are exceedingly affordable by cine lens standards (and they’re cheaper in the Kickstarter bundles, nudge nudge). The design is intriguing, and I applaud the belt-and-suspenders approach of allowing both user-applied witness marks and an adjustable focusing scale to deal with the variation in different cameras’ flange depths.

I have a GH4, and find pairing it with the Lumix 12-35mm and 35-100mm f2.8 lenses to be an ideal setup for run’n’gun work… but the Lumix zooms, which I love to death, are seriously lacking in focus and iris precision and repeatability when I’m doing more carefully calibrated setups. The Veydras look ideal for serious, cine-style shooting, and I look forward to testing them.

Ryan says he’ll send a set to Art Adams and me for review in a couple of weeks.

Disclosure: There is no material relationship between me and Veydra, Hot Rod Cameras, or Duclos, and none of them have offered me any considerations, blandishments, special deals, or outright bribes for a favorable mention.