Recently:
You are at:Home»Articles & Reviews»Acquisition»Micro 4/3»The GH4 Audio Buzz Fix

As noted in my GH4 review earlier this year, first-run GH4s suffered from an “audio buzz” problem, most noticeable with a third-party mike plugged in. This problem affected  early shipments of the camera running version 1.0 firmware; later shipments with firmware version 1.1 or later pre-installed have been factory-updated to fix the problem. Panasonic offers an in-warranty fix for first-run GH4s; you send the camera body with its body cap, and nothing else – no SD card, no battery – to Panasonic’s facility in McAllen, Texas. They rework the audio circuitry, and ship the camera back (details at the end of this article).

My GH4, pre-ordered in March, had the dreaded buzz: a sound like a motorbike or motorboat idling constantly, very slightly audible in very quiet passages. While it was “mostly harmless”, on occasion it would intrude, and I’d wind up having to duck the level in post any time things grew quiet. Certainly it was worse than the sound I recorded using the GH3.

I shipped the camera to Panasonic on 18 November, and it came back last Tuesday, exactly two weeks later. I set about seeing – erm, hearing – if the audio was better.

I didn’t capture a reference track before shipping the camera away, so I can’t do a before-and-after the way Sol March did. But I can compare the fixed GH4 against a GH3, and a newer GH4 with the factory modifications. I can also report on the sound quality of the returned camera in and of itself. 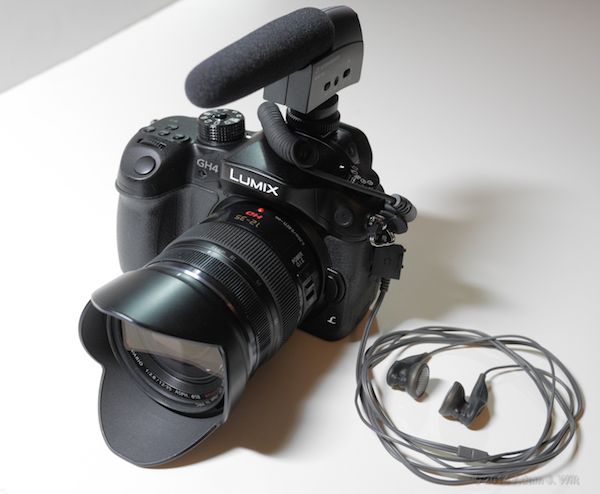 Here’s a quick screen grab from FCPX with all three cameras’ levels boosted by 50 dB:

The GH3’s audio level isn’t calibrated in dB, so I used a constant white noise generator to set a level on the meter that approximated 0dB. I wound up at “level 13” on the 19-step scale. The GH4’s level also uses a 19-step scale, and 0 dB happens to be at the 13th step, so I’m reasonably confident I’ve lined the cameras up comparably.

I also tested the GH4s recording 24fps 4K .MOVs, and I found them to be a whopping 1 dB noisier in that mode: a difference so small it’s almost literally lost in the noise (thank you, thank you, I’m here all week!).

I also found that both GH4s’ noise levels moved up and down directly as I varied input gain: boosting gain 6 dB boosted the noise by 6 dB; cutting gain by 12 dB dropped the noise 12 dB. No real surprise here: for best results, feed a hotter signal to the GH4 instead of turning up the gain.

In Mr. March’s article, he noted a substantial increase in noise when his GH4 was fixed. Again, I didn’t capture any calibrated samples before shipping off my camera, so I can’t make a direct comparison, but either mine didn’t suffer nearly so much in the process, or it was really astonishingly good before I sent it off (I strongly suspect the former!). In any case, the returned camera’s audio quietude is close enough to the GH3’s and the newer GH4’s that I’m not hesitant to use it.

If you’re a real glutton for punishment, here’s a one-minute demo: all three cameras’ audio at 0 dB gain, unprocessed; then boosted 50 dB in post; then the two GH4s at +6, -6, and -12 dB, all boosted 50 dB in post. (Note the stylish handheld titles shot off the computer screen, and the stunning 0.64 K resolution of the uploaded file! I said you needed to be a glutton for punishment, didn’t I?)

In practical testing, I actually turned the mike on and recorded a variety of interior and exterior clips, with dialog and without. In the resulting tracks, carefully monitored with good headphones, I can hear all sorts of stuff: my own breathing, a car alarm so faint I didn’t notice it while shooting, the flap of a bird’s wings as it flies overhead… but no sign at all of the fluttering buzz.

Bottom line? I’ll have no problem using the fixed GH4 for serious recording in the future, insofar as I’d use any miniplug-equipped camera for such purposes.

Here are the instructions I was sent by Maria Alonzo, the long-suffering Panasonic person handling the repairs:

The customer will need to send their camera to our McAllen,TX repair facility where a modification will be done promptly.  Along with your unit we ask you provide complete contact information.

All units will be returned to the customer via Fed-Ex 2nd Day shipping with direct signature required.

The customer should ship Only the Camera No Accessories and securely packaged to the address below via a traceable insured shipper such as UPS or Fed-Ex.

Here’s the body of the “complaint letter” I enclosed:

I enclose my DMC-GH4, S/N WE4DA002888, purchased 10 March 2014 and shipped 28 April 2014 (proof of purchase attached). The camera has the “audio buzz” issue where use of 3rd-party microphones causes a low-level buzzing or “motorboat” sound in the soundtrack. Please perform the GH4 AUDIO UPDATE to correct this problem.

This seemed to be sufficient, as Panasonic promptly fixed and returned the camera.

Disclosure: I bought my GH4 with my own money, sight unseen, but with a few early ‘net videos to inform my decision. I paid the same street price as any other civilian ($1698 plus tax, with free shipping). I sent the GH4 off for repair via FedEx 2nd Day Air ($50, insured) and Panasonic paid for return shipping as part of the warranty service.

I still have a GH3, and have owned GH1s and GH2s previously.

Panasonic has not helped or contributed to this review in any way, aside from providing normal warranty service.