Recently:
You are at:Home»Articles & Reviews»Acquisition»My First Lighting Class; or How I Learned to Light 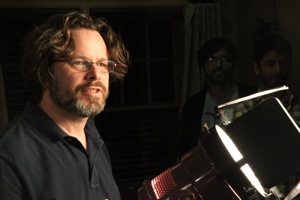 Recently I taught my first lighting class, for Abel Cine, at Sony DMPC in Culver City, California. It got me thinking about how I know what I know about lighting, and why I seem to be able to explain it.

One of the worst lessons I learned in film school was three-point lighting.

I understand why it’s taught. It’s a very simple way to teach students that they need to think about the light that models the scene, how bright or dark the shadows are, and how to separate people and objects from the background to create depth. Nevertheless, without teaching students to really see how and why that works, it’s too easy for three-point lighting to become a formula followed by rote. Many times over the years I’ve participated in spec or charity projects where one of the crew is a film student or recent film school graduate, who criticizes my lighting under their breath because I’m not “following the rules.”

Inevitably they’ll ask me what my lighting ratios are and I respond, “I have no idea, I don’t think in terms of lighting ratios,” and I’ll be met with a withering look backed by, “How did you get this job when I know this stuff better than you do?”

What I want to tell them, but really can’t, is that formulas are easy but inflexible. What’s better is to learn to “see” light in the real world so that you can learn to recreate it in the service of a story . Anyone can set up three lights and move them around from shot to shot, but formulas don’t tell you how to communicate emotion, or emulate morning light versus noon light versus moon light, or when to light with soft light instead of hard. Formulas are meant to impart the basics, but once the basics are learned formulas should be discarded.

I was stuck on three-point lighting for a long time after film school. It didn’t help that, when “The A-Team” TV series came and shot at my university because they needed a stage and all the others in town were booked, most of their lighting was three- or even two-point lighting. They’d put a 10K through a silk on one side of the camera, a 5K bounce on the other side, hang a space light from the ceiling and shoot, shoot, shoot. There’s quite a lot of TV that’s shot this way, and some of it looks great: there’s nothing that says that a formula has to look bad! But unless one understands what’s really happening beyond the formula it’s a crap shoot as to whether it will be appropriate for the circumstances you find yourself in. 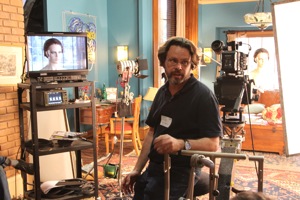 Once I got to working as a camera assistant on feature films and TV shows I saw many DPs lighting in very different styles. There was the feature film DP who lit everything with Kino Flos and consistently shot at T2; another DP whose exposure formula consisted of 40fc key, 20fc fill, 50fc backlight, SHOOT!; and yet another who put large bounce sources under the lens and then raked hard light through the set to emulate sunlight pouring in through a window and bouncing off the floor. It began to occur to me that there was more to this lighting thing than I knew about.

Seeing dailies was a great help. As a first camera assistant I was often standing next to the DP when they took their light readings, and I was able to see what was on the meter and compare it to the stop we put on the lens. Every once in a while I’d sneak in a question: “What are you reading with your spot meter right now? What is that light over there doing?” Over time I came to see.

I remember helping a DP light a set on a small doc shoot. He was guiding me as to where he wanted a light aimed, and as he gave me direction I figured out what he wanted lit. “Oh, you want it here,” I said as I aimed the light where I thought it should be

He looked at me in astonishment: “Art! You can SEE!”

I guess I could.

What fascinated me over time was discovering how many people couldn’t see light. One DP I assisted regularly told me he had a hell of a time finding gaffers who could see lighting the way he did, or at all. “Most of them just know how to run a crew and aim lights,” he said, “and I want someone who can see what I’m going for and run with it. That goes a long way when shooting TV, where every second counts.”

I grew so that I could watch a feature film and tell you not only who the DP was but what country it was shot in. The U.S. “style” was all over the place and was consistent only in that lighting tended to be favored over composition, but British movies tended to favor really wide or really long lenses with sophisticated compositions. French films generally featured well composed frames, but all the mood was in the background while the foreground was very brightly lit. Australian films were very strong compositionally and lit very simply.

I could also spot work by Dean Cundey, Conrad Hall, Bruce Surtees and others who shot feature films, while William Gereghty had a distinctive style that really stood out whenever I saw a TV series that he’d shot.

There are still some nationalistic indicators than delineate feature films and television but a lot of the styles have blended together now. It’s much harder to tell who shot what where anymore without looking at credits.

I had two tricks for figuring out what was going on in a lighting setup:

(1) If I was on set and I saw something I liked but couldn’t figure out how it was done, I’d simply go stand in the lit area and look around to see what sources were hitting me. Over time this method has served me well in a number of ways. When I’m lighting a set and see a bit of light straying into an area in a way that I don’t like I go stand in that light and look around to see which unit it’s coming from. Then I talk the grips into putting a flag between me and it, and I’m done.

(These days I’ll stand in a space and look for unwanted fill sources, such as white walls and ceilings. It’s hard to stand at a distance and know exactly which light is doing what in a complex set, but if you simply stand in the set it’s quickly apparent which lights and which light surfaces are contributing light to the scene–wanted or unwanted.)

(2) When watching TV and movies I looked in the actors’ eyes. I became adept at spotting how a DP lit faces by counting the number of reflections in the eye. One on either side of the iris meant classic key+fill lighting; one light in the center and one on the side said key+fill where the fill is over the top of the camera or coming from the fill side; three lights, with one below the iris told me the DP was using an eye light, as eye lights tend to work best from below the lens as they can reach into the most deep set eyes from there.

My approach has always been a combination of right brain and left brain: I see something I like, and then I do my damnedest to figure out how to reproduce it. Right brain detects beauty, left brain figures out how to make it. There are those who are primarily right brain in their photography or cinematography: these tend to be the people who can make beautiful images but can’t seem to explain how or why. I think a lot of still photographers fall into this category, as they tend to focus on capturing action and emotion first and then cropping and correcting the image later. Their compositions tend to be very different, almost as if they can feel the volume of a frame: the composition doesn’t seem complex but somehow it works powerfully. Lighting in stills, though, tends not to be very complex: I see a lot of flat lighting that’s meant simply to illuminate the subject, as the subject is everything. 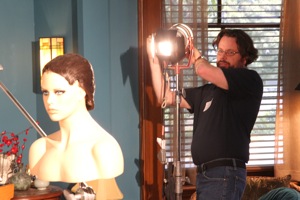 That’s where I think cinematography excels: we’re taught to think in terms of lighting and contrast, and we’re not just capturing performances but rather creating them. We have to use both sides of our brains because we can’t frame an image, hit a button and capture a moment in time, and hope a couple of the thousand moments we’ve caught in a day will be powerful enough to print and display. We have to turn out consistently excellent work predictably, and every shot has to count. It’s not enough to appreciate beauty and freeze it: we get hired because we know how to make it.

For a long time my parents wanted me to get a “real” job and go into something stable, such as engineering. While I’ve not figured out the stable part (nor do I particularly want to) I have discovered that I’m as much of an engineer as they wanted me to be, and possibly more so. Engineers solve problems in the real world, and that’s certainly what I do every day on set. I solve problems to tell stories, and the nice thing is that my problem solving approach is as artistically unique as I am. Indeed, this is true of everyone who becomes a cinematographer.

A good cinematographer is an artist who can solve problems really, really quickly.

In the beginning, though, it all goes back to appreciating beauty first, and then being driven to figure out how to create that same kind of beauty from scratch. I remember being a 12-year-old kid and watching a TV series called “The Prisoner” on PBS. I was riveted every week, not just by the stories but by the lighting and especially the compositions. I didn’t see anything else on TV that came close to what that show achieved visually. At the time I had no idea what was involved, or how crazy the industry was to work in, or how the typical crew hits the ground running every morning and doesn’t stop for the next 10-16 hours. I just knew that I wanted to make moving images that looked the same as what I was watching on TV, because—somehow—they moved me.

And now I can. 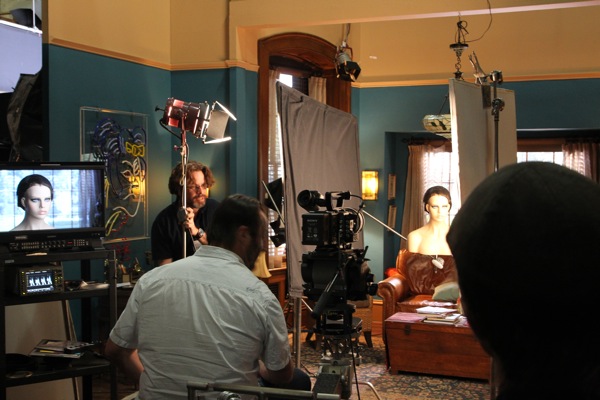 All photos courtesy ©2013 Abel Cine, and used with permission.