Karl Horn of CineTech is highly regarded for his superbly crafted pro shooting accessories for the film and high-end video industries. After adapting his follow focus, matte box and Hip-Cam rigs for the Canon XL1S, he recently did the same for the Sony PD150. Here are some shots of his gear from the NAB 2002 tradeshow in Las Vegas. 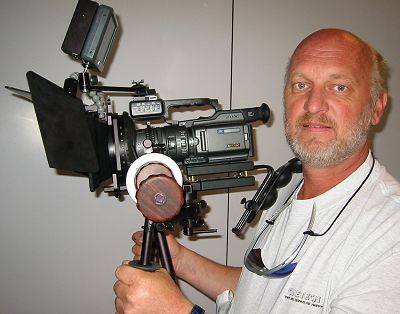 Karl with the full rig. Some may question the purpose of the add-on LCD monitor in lieu of the one built-in to the PD150. The reason relates to the viewing angle and the shooter’s field of view. It’s easier to monitor the shot along with the unfolding action in front of the shooter with an external monitor mounted in this position. The shooter’s vision can hold this add-on monitor’s image in focus along with the action directly ahead in the same field of view, instead of shifting focus to the much closer and smaller built-in LCD on the camcorder. Also, this particular add-on monitor is a professional-grade TransVideo model which provides an image superior to the built-in LCD. 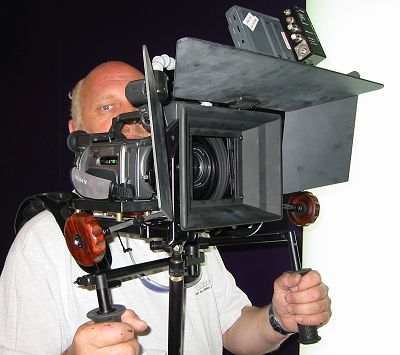 Karl peaks over his massive custom 4×4 matte box and barn doors. This is a good view of his gimbaled Hip-Cam system with twin control handles and twin follow-focus knobs. 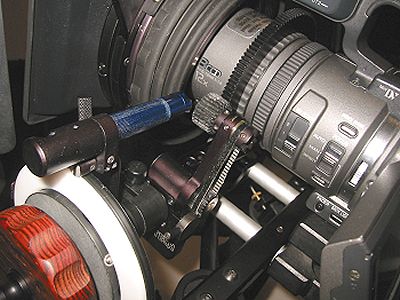 A close-up of Karl’s follow-focus rig. A custom geared ring fits over the PD150’s focus control ring, which meshes with the geared follow-focus mechanism. There’s a small blue AAA-size Mini-Maglite mounted there as well; it’s useful for other cameras using traditionally marked full-manual professional broadcast video and film lenses… keep in mind that Karl has adapted this existing piece for the PD150 but it is easily interchangeable with other cameras, so the Mini-Maglite remains in place even though it may not be as useful with this particular camcorder. 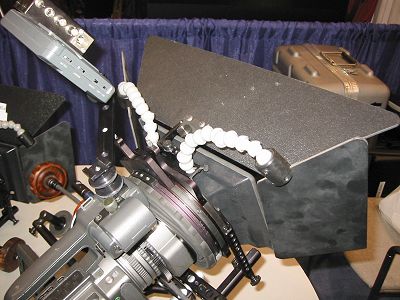 The eyebrow over the matte box is on a hinged mount; but note the unique caterpillar-style flexible barn door holders. The external LCD monitor mounting bracket is also clearly visible here. It attaches to the PD150’s accessory shoe. 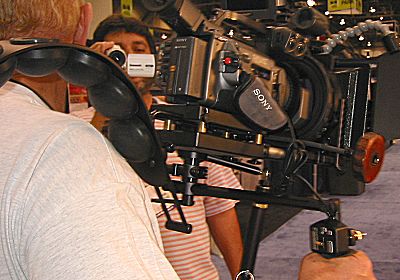 A rear view shows the padded shoulder support of Karl’s Hip-Cam system plus the actual mounting plates for the camera itself. He’s using a VariZoom Stealth lens controller on the right grip handle for zoom and focus control. The visible daylight below the padded shoulder support indicates that the full weight of the camera system is borne by the vertical rod which fits into a pocket on a special belt around Karl’s waist. 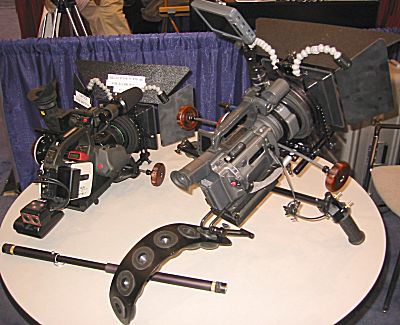 The entire system is interchangeable with the Canon XL1S as well. Karl recognized the popularity and adaptability of the Sony PD150 for hand-held cinema-style shooting and skillfully modified his Hip-Cam system to suit. See more of Karl’s gear:

Thrown together by Chris Hurd