Years ago I turned a low-end SD camera into a pinhole device by covering the lens port with black wrap and poking a hole in it. I decided to try again with a much higher-end camera. Here’s what happened… 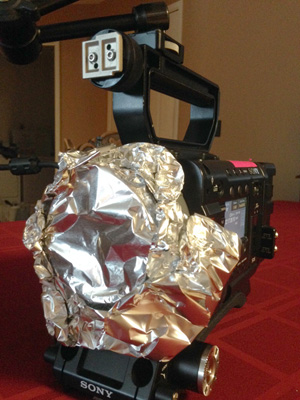 Above: There's a pinhole in there somewhere...

In times past, when dinosaurs roamed the earth with 480i cameras, I found myself sitting in a lit studio waiting for talent to arrive. This was before smart phones became a “thing,” and I was at a loss at to how to amuse myself until they arrived. The camera at hand, a Sony D30, was very light sensitive for the time, and I wondered if it was possible to turn it into a crude pinhole camera and get an image out of it.

I grabbed a piece of black wrap, pulled the lens off, and taped the black wrap over the lens port. I then cut a small and crude hole in the center of the black wrap and cranked the camera’s gain up to something crazy — I think it went up to 32,000db! Much to my surprise I saw an image on the monitor. It was fuzzy and a little dim, and the angle of view matched what I’d see with a 60mm lens, but it worked. I was completely amazed.

It struck me that, over a decade later, I have never repeated this trick. As I’m temporarily in possession of a Sony F55 I decided to try again.

I covered the lens port with a piece of aluminum foil and poked a hole in the center with a sewing needle, then walked around my condo handheld to see what kind of images I could create.

The effect is pretty cool. It’s definitely a look: I had to crank the ISO to 10,000 just to see an image so the overall effect is very soft and noisy. I recorded internally to an SxS card in 4:2:2 S-Log2 mode and graded the footage in Resolve 10.

The angle of view is pretty narrow. It looks to be similar to an 85mm-100mm lens.

Not being content to rest on my laurels, I decided to see what happened when I added a couple of additional pinholes to my foil lens. I added two more: one horizontally adjacent to the first, and another above and between the two to make a triangle:

The third, vertical hole is a bit too far away from the others as its image doesn’t overlap obviously unless something really bright appears at the top of frame. Still, it’s a very interesting look–and it’s also interesting to note the exposure was a bit brighter than the one hole setup, which I guess shouldn’t be terribly surprising.

Not being satisfied with three holes, I decided to try nine in a cross pattern:

I’m not sure how practical this technique is to use on an actual project but it sure is fun. Pinhole work requires a ton of light and a lot of contrast: if it were sunny outside instead of overcast I think the results would have been a lot more interesting, and if I were doing this on an interior set I could see employing a lighting style with very bright hard sources and dark, black shadows.

“Normal” pinhole apertures–those that are made professionally–are drilled with a laser to ensure that they are completely round as the shape of the aperture will have a definite effect on the resolution of the image. They also have a specific aperture, usually f/8 or f/11, that puts them somewhat below the diffraction limit for large sensors, so the image isn’t any softer than it has to be. A pinhole will never create a really sharp image–you need a lens for that–but they do have a look that’s all their own.

If you’re interested in pursuing this kind of thing yourself you can find pre-made pinhole lenses from Holga in Nikon and Canon mount at various online stores, and Lensbaby makes a version in PL mount.

The one positive about a pinhole lens is that everything is in focus… or at least as focused as a pinhole will allow. As long as you don’t need a perfectly sharp image you’ll never have a really, really soft one either.