Recently:
You are at:Home»Articles & Reviews»Acquisition»Why “Exposing to the Right” is often Completely Wrong

Still photographers love histograms. Cinematographers hate them.
Here’s why our world is so different from theirs in this regard… 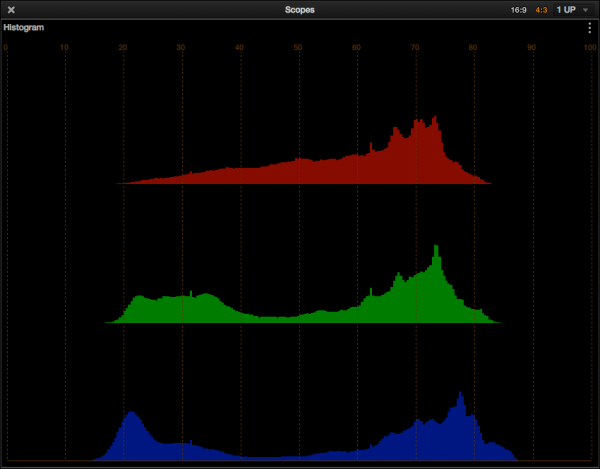 In the example above there are a lot of bright pixels in the image so all three color channels show peaks on the right side. The shadows are a little cool so we see low peaks in the green and blue channel but not the red channel. And the mid tones are a little warm because there are some red pixels in the center of the histogram while the green and blue channels show a dip. This is valuable information… but it tells us zero about how bright any specific object is in the scene. That’s because histograms are not meant to give us precise exposure information; instead they tell us generally whether we are capturing enough information to do as much as we can later in a color grade. They give us zero information about consistency of exposure. It is a brute force exposure tool.

The histogram above is “normal” because there are gaps to the left and the right, which tell us that we’ve captured all the available brightness information in the scene. 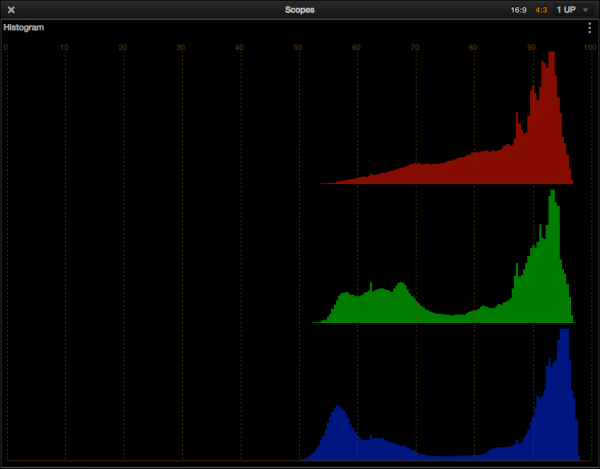 This is an “ETTR”, or “exposed to the right,” histogram. There is really only one reason to expose this way, and that’s to eliminate noise. By pushing the exposure all the way to the right the “meat” of the image is pushed as far from the noise floor as possible, so that when this overexposed image is pulled down to look normal the noise is crushed into the darkest of shadows. Shadow detail is pushed away from the noise floor, which helps in the event that a colorist needs to make a low contrast image out of a high contrast image.

ETTR works well for still photographers, who often grade their own images and do so one at a time. For those of us in the cinematographic world this is not a great idea as it’s common for someone else to grade our images and they need to have some idea of what look we’re going for.

ETTR became popular with the first RED ONE camera as it showed a fair bit of noise in the shadows, and this technique results in very clean images at the expense of a high ISO rating. (ETTR means exposing the image brighter than if you were to calculate an exposure using a meter at the camera’s recommended ISO–and by doing such you’re effectively shooting at a lower ISO.) Many who shoot with the Blackmagic Cine Camera advocate the same working style. This technique only works with raw or log-encoded recording formats where there’s no additional processing going on in the highlights or shadows… but the worst part is that it only works one shot at a time, and no moving image stands alone.

Imagine you are a colorist who has been handed a hard drive full of shots for a commercial about, oh, let’s say garden products. Every single shot has its own exposure: the outdoor shots vary in exposure based on the brightness of the sky or a distant highlight, while the indoor shots are very bright overall unless there’s a window in the background, in which case the mid-tones are darker to try to retain exterior highlight detail.

Here’s another question: how much money does the producer have for color grading, and do they have enough considering every single shot needs its own custom grade?

Budgets are tight these days, and even in the best of times our job as cinematographers is to stretch the budget dollar as far as we can. Those of us who work a lot do so by over delivering, but also by ensuring that the look we envisioned–the look that we agreed upon with the director in prep–is the one that ends up on the screen. What’s the better way to do this: expose consistently by using a handheld meter or a waveform monitor, or expose every shot in its own way using a histogram, zebras and ETTR and trust that someone else will fix it all later?

I get much better results using a handheld meter and a waveform monitor. I choose an ISO that delivers the level of noise that is right for the project (more often than not I prefer to shoot “clean” at a low ISO) and I use that as my exposure reference for the entire project. Once the colorist grades the first shot they should be able to see what I want and where I’m going, and 80% of the additional corrections should be as simple as copying and pasting the base look onto all the other shots. In this way I get a consistent look and the producer gets the most for their post dollar.

There are a few times when I’ll use ETTR for individual shots. An example might be an extremely contrasty and wide landscape shot as this will often stand alone and need a lot of tweaking in post. Generally, though, I save ETTR for emergencies. I strive for consistency. Not only is that the hallmark of a good DP but it saves time and money in post and shows the producer that you really do know what you’re doing.