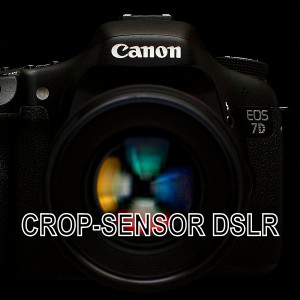 Canon EOS crop-sensor Digital Single-Lens Reflex (DSLR) cameras are a more affordable alternative to their pricier full-frame DSLR counterparts. This page provides an overview of the five current Canon EOS crop-sensor DSLRs, and is meant to serve as a pre-purchase guide as well as an existing owner’s technical resource. Jump directly to any section of this page with these links:

This guide is primarily targeted to the U.S. market and I have listed U.S. prices. The “where to buy” links on this page refer to DV Info Net site sponsors, all of which are U.S. dealers. At this time I do not have a dealer outside of the U.S. as a site sponsor. However, some dealers such as Adorama and B&H Photo Video will ship overseas to just about anywhere in the world. Currently there are four companies to whom DV Info Net refers sales enquiries for Canon crop-sensor DSLR cameras:

All Amazon links point to Prime pages, sold directly by Amazon without any add-ons. When ordering from B&H Photo, be sure to check their holiday schedule and hours of operation. Precision Camera is a full-line Canon dealer, but they do not list everything on their site. Even if a purchase link is greyed out, they might still be able to order the item if you contact them directly by phone or online.

Mouse over the metric weight value to see the Imperial equivalent in a pop-up. ISO is stated as a maximum value in video mode at the highest resolution. “Aud. i/o” refers to audio input (a microphone terminal) and output (a headphone jack). “Art. LCD” refers to an articulating LCD display, which is either variable-angle (vari) or non-articulating (fixed). “End. stills / vid” refers to battery endurance assuming a full charge at normal temperatures. The various DSLR user manuals, linked below, will provide more specific details regarding battery endurance in recording and playback modes under various conditions. Model numbers are provided for battery grips, battery chargers and AC adapters. Be advised that the prices shown on this page are listed at full MSRP (the manufacturer’s suggested retail price) and may not reflect current discounts and promotions offered by dealers. In most cases — that is, for all models except those most recently announced — the actual amount will most likely fall below the prices given here.

All Canon EOS crop-sensor DSLRs have a CMOS (complementary metal–oxide–semiconductor) image sensor and at least one DiG!C image processor. The sensor size, referred to as APS-C, measures 22.3mm x 14.9mm in all cameras (except the EOS 7D Mark II sensor, which is 22.4mm x 15mm). The sensor size crop factor is 1.6x relative to full-frame 35mm. These CMOS sensors and DiG!C processors are designed in-house and manufactured by Canon Inc. Like other still-photo cameras, all Canon EOS crop-sensor DSLRs are limited to a maximum recording length of 29 minutes 59 seconds for any single video clip. Video may be recorded only to a single flash card slot. Dual video recording and relay video recording are not possible with a Canon DSLR. While EF-S series lenses are made specifically for crop-sensor DSLRs, all standard and L-series EF lenses are also fully compatible. With any of these lenses, the effect of the smaller image sensor is akin to having a 1.6x extender built in to the camera. The autofocus system in all Canon crop-sensor DSLRs is Dual Pixel CMOS with Movie Servo AF. All have a pop-up flash and an accessory shoe. All except the EOS 7D Mark II have a touch screen and an articulating LCD. All have a Mini HDMI jack. None of the Canon EOS crop-sensor DSLRs provide clean HDMI output except the EOS 7D Mark II and Rebel SL3. All have a 3.5mm audio input jack and a built-in microphone. None except the EOS 80D and EOS 7D Mark II have headphone jacks. The cap covering the lens mount on all Canon DSLRs is Body Cap RF-3. 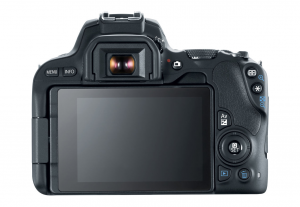 As the smallest, lightest and most compact Canon DSLR, the Rebel SL3 is also the most affordable. It is the least expensive of all the current crop-sensor models. The previous model SL2 shared the same video capabilities and feature set as the Rebel T7i and EOS 77D. The SL3 now adds 4K Ultra-High Definition video recording at 24 frames per second, with clean HDMI output. WiFi, NFC and BlueTooth connectivity are all built-in. The only way to go smaller than this size in the Canon EF system is with the mirrorless EOS M series. This camera is sold as the EOS 250D beyond North America. In Japan, it’s the Kiss X10. 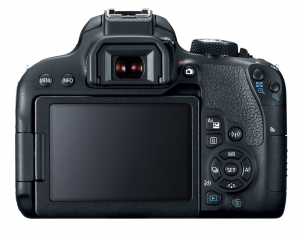 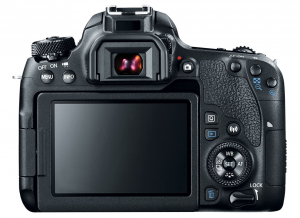 The EOS 77D is actually the current version of the previous Rebel T6s, with a new name which graduates it out of the Rebel series. It shares the same video feature set as the Rebel SL2 and the Rebel T7i. Physically it incorporates a series of upgrades that separate it from the Rebel T7i just as the Rebel T6s did from the Rebel T6i. The most important of these differences are that the EOS 77D has a locking mode dial on the top left of the body and an LCD information panel on the top right, similar to the EOS 80D. There’s a control wheel around the omni selector on the back, not found on the Rebels. Basically the EOS 77D is a cross between the Rebel T7i and the EOS 80D, but it does not have a headphone jack or a battery grip option. The EOS 77D battery type is the same as the Rebels. WiFi, NFC and BlueTooth connectivity are all built-in. This camera is marketed as the EOS 9000D outside of North America and in Japan. 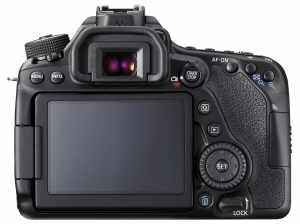 The movie recording features which made this camera’s predecessor, the EOS 70D, really stand out — such as Dual Pixel CMOS AF, face detect auto-tracking, Movie Servo AF and more — are now readily available on the less expensive Rebels and the EOS 77D. However, the EOS 80D retains some significant advantages over those cameras that make it well worth the extra cost. Unlike the others, it has a headphone jack, and the option for a dual battery grip which can double the power endurance. Like the EOS 7D Mark II, it can record HD video in the QuickTime .MOV format with ALL-I compression, or .MP4 with IPB or IPB Light. Unlike the EOS 7D Mark II, the EOS 80D has an articulating touch-screen LCD. In many ways, the EOS 80D has the most attractive feature set of all the Canon crop-sensor DSLRs for recording HD video (it’s just missing a clean HDMI output). An ideal combo for this camera is the EF-S 18-135mm USM lens with the Canon PZ-E1 Power Zoom Adapter, which are both included in the EOS 80D Video Creator Kit bundle. 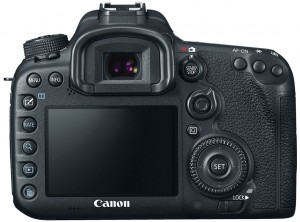 In terms of build quality, the EOS 7D Mark II is the most robust of the Canon crop-sensor DSLR line. It is the only crop-sensor DSLR with a magnesium alloy body (all others are polycarbonate) and the only one with dual image processors. It borrows the 65-point AF system from the flagship EOS 1D X Mark II camera, and is physically very similar to the EOS 5D Mark IV. In fact, the 7D Mark II is positioned primarily as a fully professional back-up camera to either of those full-frame DSLRs. At 10fps it has the highest still photo frame rate of the crop-sensor cameras, but it’s also the only one that does not have a touch screen or an articulating LCD. However, it does have a headphone jack. GPS is built in. WiFi is available in the form of the Canon W-E1 WiFi adapter, which fits in the SD card slot, thereby limiting video and photo recording to the Compact Flash card slot only. Video compression mode choices are ALL-I, IPB and IPB Light. Unlike other Canon crop-sensor DSLRs, the EOS 7D Mark II has clean HDMI output with embedded TimeCode and audio.