How to… Budget your time, Listen and Learn, Concentrate and Shift your Focus.

In the 25 years I’ve been regularly attending NAB, I’ve learned a few tricks.

For instance, when I was starting out, trade shows were about seeing all the shiny things on display, because for decades the big trade show was the only place to get information directly from multiple manufacturers. So most attendees would end up flying home with bags and bags of of brochures and product sheets to study.

But those days are gone. 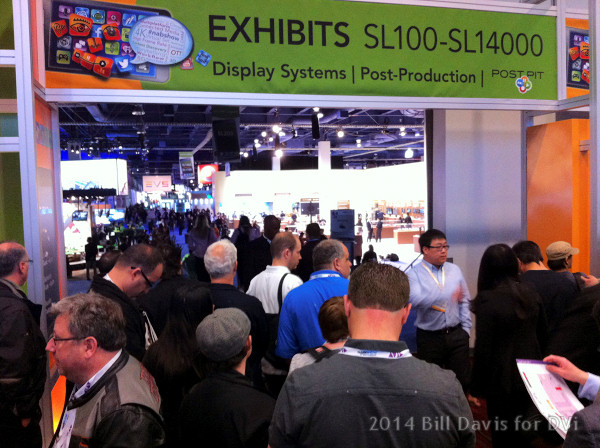 Above: One of many entrances to the show floor.

Today, new product info is on the web 5 minutes after it’s released. So I spend my trade show time much differently than when I was starting out. I try to be more efficient, more focused, … more targeted. Because over time, I’ve learned to separate what’s actually important at a trade show from what just seems important in all the noise and bustle.

If you want to make your own trade show attendance more focused and successful, here are some basic suggestions. Pick and choose what makes sense for you. 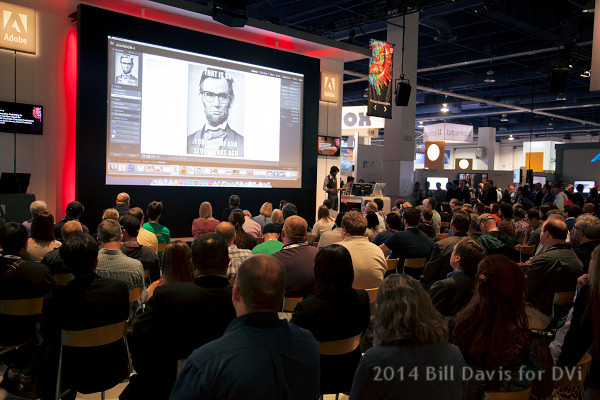 Above: A large live show demo at NAB.

When you register, find a show floor map and plan a personal “hall priority and route map” in advance. NAB is HUGE and you’ll be on your feet for hours and hours. It’s surprisingly easy to miss not just particular booths, but whole buildings and floors! But don’t be too rigid. Allow for “wandering time” if you can – because sometimes stumbling across the unexpected is where you discover the really cool stuff! 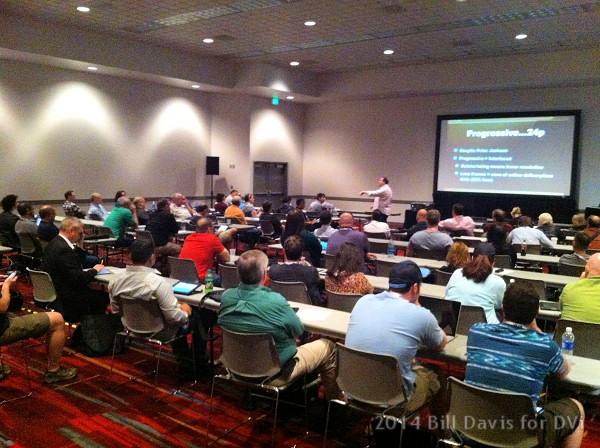 Above: An NAB Lecture.

Yes, NAB has a zillion booths where you can touch the products and talk to the sales teams. But many people don’t realize that just off the show floor, there are all sorts of more formal demos and lectures and classes. Many of these take a more expensive registration level to attend, but not all. And dropping by these can be a great investment in the most important business tool you have – yourself. One great truth about our industry is that equipment constantly depreciates and becomes obsolete. Learning – not so much. 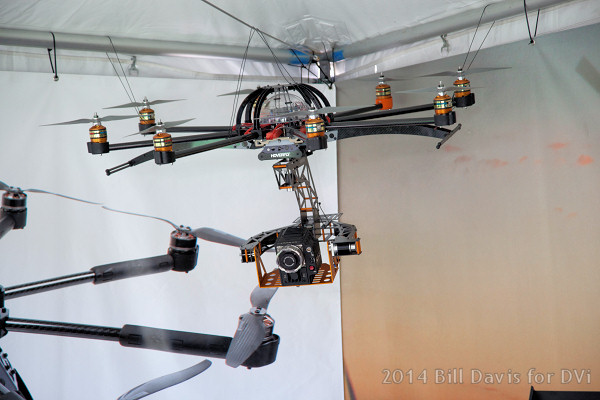 Above: One drone… among hundreds.

You’re going to be surrounded by all manner of interesting toys, flashing lights and professionally produced demos. But unless you’re actually looking to own, say, a camera drone – should you really spend three full hours of show floor time looking at them? If it’s a realistic business strategy for you – fine. But if not, move along. I honestly don’t spend more than maybe 25-50% of my NAB daylight hours looking at gear and equipment. Not because I don’t love that stuff, I do! But because it takes too much of my energy away from the what actually can help your career the most – which is…

Tip 4: Shift your focus from seeing things — to meeting people!

This is the real hidden secret of a trade show like NAB that eludes far too many attendees.

The stuff you see is a bit important, but the people you meet are actually more likely to transform your career.

I know that many attend with family in tow or as members of formal company groups – so their after hours time isn’t their own. I get that. But if you’re attending on your own dime with business connections in mind – then focus on that, because the “after hours” social side of the show is honestly not a thing to take lightly. 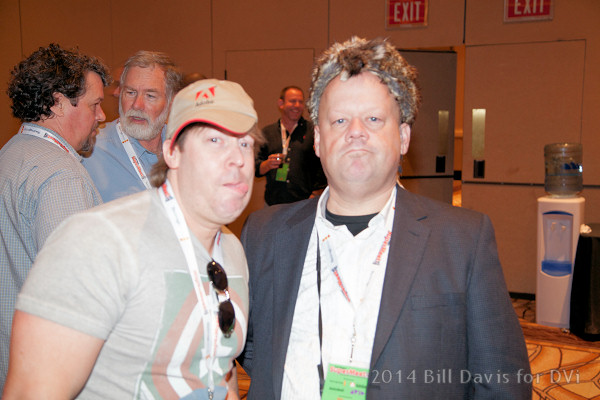 Above: An NAB after hours event, the SuperMeet (Dan Berube’s coonskin cap is optional).

This is where you can make your best human connection, away from the maddening crowds of the show floor. So prep yourself. Start by taking some time to tune up your website or revisit your on-line demo reel so it’s up to date. Think about how you’re going to share your URLs and profiles and handles to help others connect and learn about you.

Also, it’s smart to figure out a formal strategy for collecting contact data from those you meet. It might be as simple as where you’ll store the paper business cards you pick up, or making a virtual NAB 2014 contacts folder or an ID symbol on your phone or laptop.

If you’re not a natural conversationalist, there’s no sin in taking extra time to brush up up on the latest industry topics and trends. Pre-plan and literally practice a few “go to” topics and questions that you can pull out if you find yourself being introduced to someone you want to meet and can’t quite figure out how to begin a conversation.

The great scientist Louis Pasteur famously said: “Fortune favors the prepared mind” – that works in science – and it works at trade shows!

So this year, don’t just walk around the trade show without a plan – work it – particularly after hours.

Because you never know. That person you strike up a conversation with at the hotel bar that you discover shares your interest in gypsy-swing bands? He or she might just turn out to be the same person who, ten years from now, is in a position at a TV network to buy your hot new script!

Stranger things have happened at NAB.

Bill Davis has a lovely collection of NAB Badges going back to at least 1997. He’s also Apple certified in Final Cut Pro X and owns a production company in Scottsdale, AZ. Photos from NAB 2013.

Bill Davis owns and operates NewVideo, a production studio in Scottsdale, Arizona focused on corporate video projects. During his 20 year career in the visual arts, he’s been in demand as a voice talent, videographer, script writer, and producer. He became one of the earliest adopters of Final Cut Pro in 1999, and spent a decade as a featured writer and Contributing Editor at Videomaker Magazine. He is also the creator of StartEditingNow! — a unique modern turnkey editing instruction curriculum that ships with professionally shot, fully rights-cleared “multi-track movie” content for classroom editing instruction in middle schools, high schools and universities.