Here At Last And Under New Ownership

The Vegas world was excited in April 2014 with the release of Vegas Pro 13 at NAB. With a typical release at NAB or IBC, everyone was waiting for an announcement in April 2015 at NAB for the next version of Vegas – but none came. This was not totally out of line so the wait came for IBC in September of 2015. However, no announcement came at that time either. Then April 2016 came around and Sony Creative Software did not even attend NAB leaving Vegas users questioning was was happening with their favorite NLE.

But all was not lost! Shortly after NAB, Magix announced that it had purchased many assets from Sony Creative Software including Vegas, Sound Forge, Acid, DVD Architect, and other related packages. Beyond that, it also announced VEGAS Pro 14 would be released later in the year. The time has finally come and now VEGAS Pro 14 is here! So let’s see what’s in the new version. 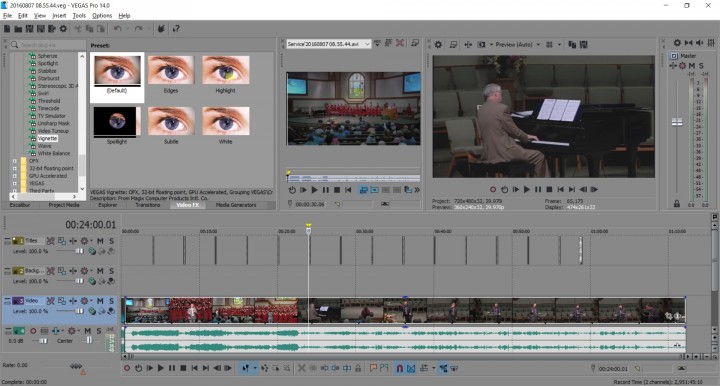 On first startup, you will notice that the serial number and activation process has changed to the Magix activation process. However, activation was was very easy to complete. The new icon is a film strip stylized as an “M”. But there are only a few references to “Magix” and the product name is now “VEGAS” – all caps – and installs into a VEGAS folder.

Bug fixes were a major goal for VEGAS Pro 14 with over 25 entries in the “bug fixes” section, meaning Vegas should now be more stable than previous versions. In addition to the bug fixes, some new features have been added as well. 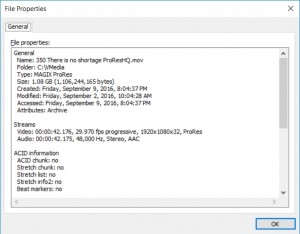 A major new feature is native support for reading ProRes 422 files without needing QuickTime installed. While it will not read all MOV files natively, reading of the ProRes files I tested was very smooth. In addition, Vegas can now read and write HEVC/H265 files.

Another long neglected area is external hardware support for various BlackMagic Design products including the DeckLink, Intensity, and UltraStudio lines. AJA support has also been updated. 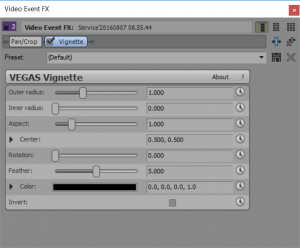 Several other things will simplify the editing workflow. Hover-scrub in the preview screen allows you to just move the mouse over the video frames in the trimmer to scrub the timeline. Resample is now on the Project Properties dialog so you can control the default resample and you can override the default as as event switch. Gamma calculations now keep the various 32-bit and 8-bit levels more consistent. The Velocity Envelope now goes to 1000% instead of the previous 300% limit, allowing up to 40x when combined with the Playback Rate. A new Vignette plugin has been added and VEGAS now has support for High Frame Rate video clips.

Scripting is still fully functional in VEGAS Pro 14 but you will need to make some changes to remove “Sony” in various places. For text scripts, you can simply open them and notepad and make the needed changes. For compiled scripts the original author will need to make the changes. In the scripts, make the following changes:

Search anywhere in the script for “Sony”. If it is referencing a plugin, you will need to change “Sony” to “VEGAS” at each instance.

Those are the major changes needed to update any script to work in VEGAS Pro 14. For anyone using my scripts, you can download the updated compiled scripts here: 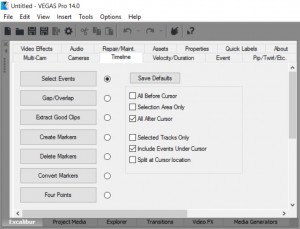 With the many bug fixes and the interest in what people want added to VEGAS, it appears Magix is headed in the right direction with VEGAS. I’m looking forward to a bright future with Vegas.