Today a very interesting fundraising campaign has hit Kickstarter. The company behind the product is a veteran in the world of successful crowd-funding launches. Building upon their two earlier marketing campaigns, this one will combine elements from all of their existing products. Cinetics, a company based in Austin, Texas and founded by Justin Jensen will be introducing its motorized and programmable camera slider system called Axis360. 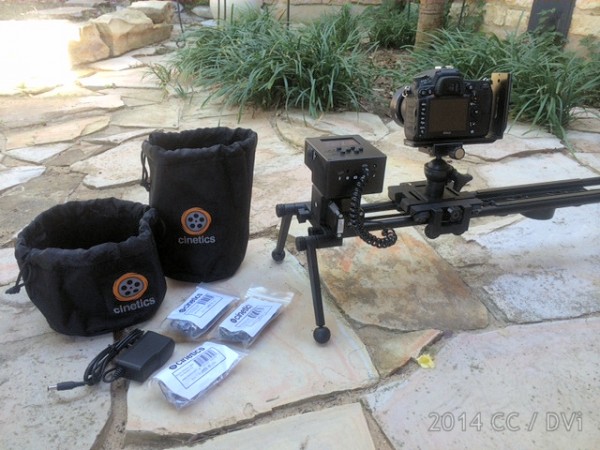 Axis360 is an automated motion control system. It is designed specifically for small production crews that utilize cameras in the 11 pound and under weight class. That class of camera is increasing all the time, ranging from most all DSLRs to even the C300.

Axis360 is controlled by the already popular CineMoco motor controller. This easy to setup and navigate controller allows for a wide variety of setups for both video and time-lapse capture on most Canon and Nikon DSLRs with included support cables, or any other camera in the weight class with built in intervalometers.

I was given the opportunity to try out a pre-release version of the Axis360 just days before the start of the Kickstarter campaign. I was invited to the offices of Cinetics and given a complete walkthrough by the founder Justin Jensen. 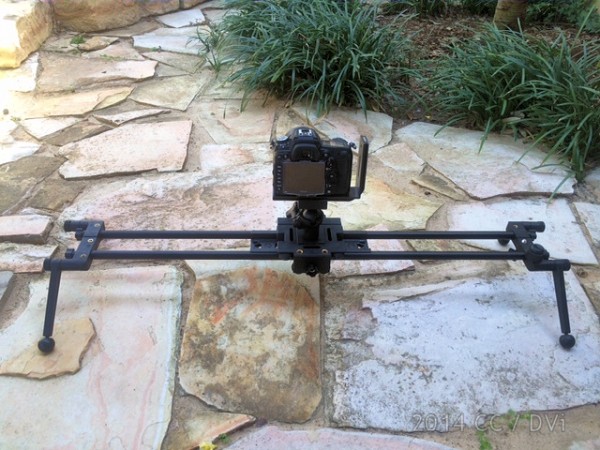 At first glance the Axis360 appears to be just another well built slider: sealed bearings, articulating outrigger arms, multiple brass threaded inserts, silent rubber rollers with a unique tension adjustment, and a nice wide position-able base plate that provides ample real estate for a 75 or 100mm half ball adapter if the slider needs to be off the ground. The Axis60 can, of course, can be used as a fully manual slider without any of the motorized controls. However, once Justin started to build out the system with the CineMoco unit it quickly started to distinguish itself as something much more than the base slider. 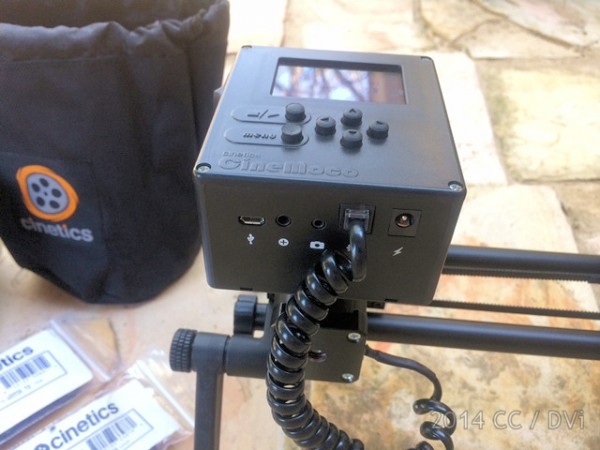 I was happy to see how quickly the controller could be mounted on the slider. The on-board battery will drive the unit for several hours of use. For longer time lapse shots an external battery can be used. No tools are needed in order to build out the system. Nice large locking knobs provide fast and easy setup. The detail in the rosettes used on the outrigger arms is a nice touch. Outriggers are one of the most adjusted pieces on any slider, and they often break or wear out very quickly on cheaper models. The belt drive of the Axis360 is simple to setup and has a nice tension adjustment. The unit also comes with a very nice ball head and Arca type L bracket. You can and should use a different fluid head if pushing a larger camera such as the C300 (but the supplied system is more than ample for DSLRs). See the photos below for some close-up details of the Axis360.

At the time of this writing the designers were still toying with offering options of either carbon fiber rails or aluminum. The aluminum rails were able to be broken down into half sections, making transportation of the unit even easier. I personally prefer continuous rails, but the attention to the connecting threads in the split rails has been well thought out.

The only improvements I personally would like to see on the Axis360 are a starting mark on each of the four outriggers. When setting up the unit it would be nice to have a reference mark that was the same on each leg. I hate guessing the whereabouts of each leg in order to find a common starting point for level. I also would like to see the ball leveling feet on each of the outriggers adaptable so I could mount the slider to plywood or 2×4 lumber rails. Mounting brackets would also allow for suction cups to be mounted on all four corners. 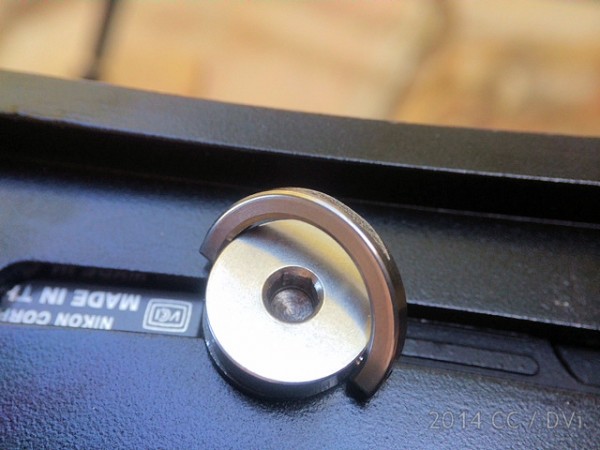 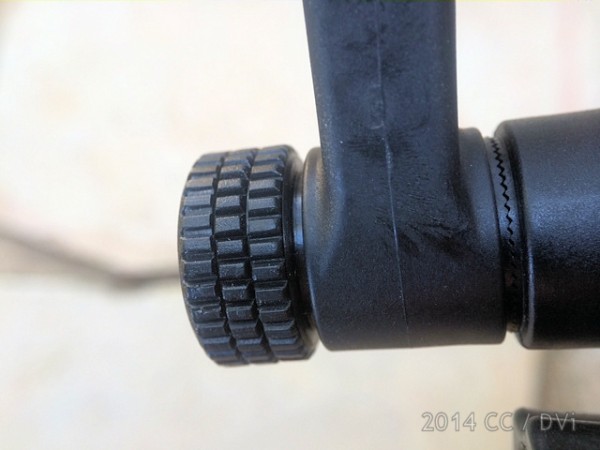 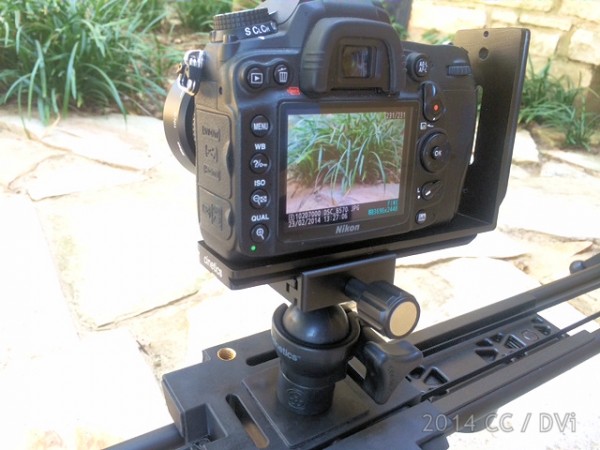 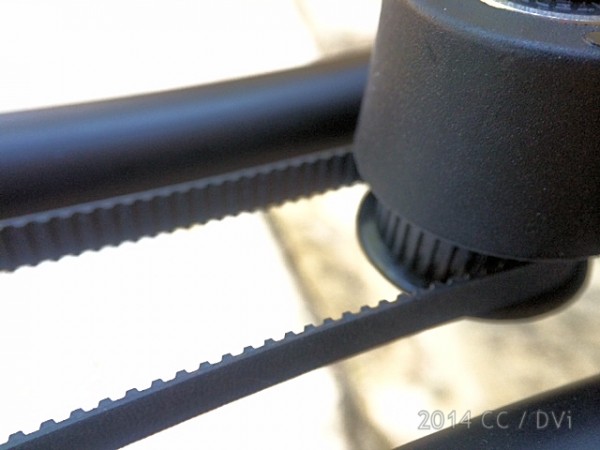 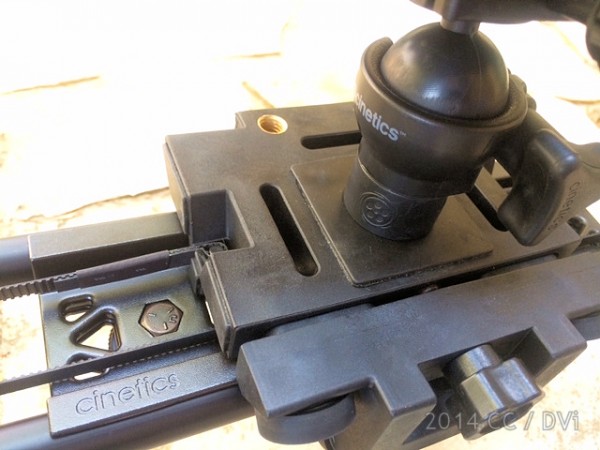 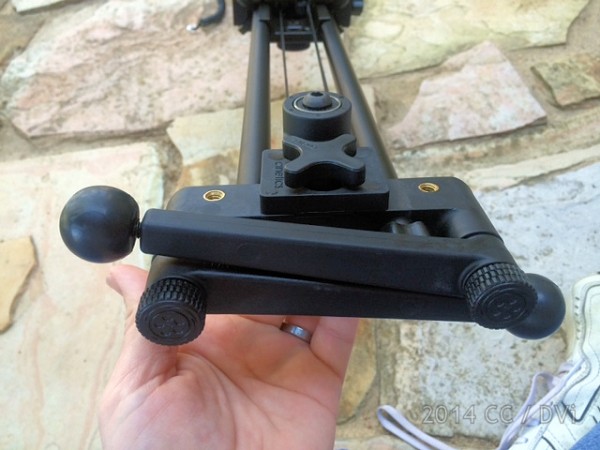 Overall, I was very pleased with the build quality and function of the Axis360. I hope to be doing some more detail setups over the next few weeks and will certainly offer my support to the upcoming Kickstarter campaign. For further information please check out the Kickstarter campaign or the Cinetics web site.

About the Author
After almost two decades as Vice President of Production Services for the largest rental facility in central Texas, Craig Chartier has returned to his first passion as Director of Photography. Craig was an early adopter of full frame 4K imaging securing the very first RED One camera delivered in the state of Texas. Recently completing two feature films slated for release later this year, Craig continues to be on the forefront in utilizing the current generation of high definition acquisition. He has served on film festival panels and guest lectured at college film courses.