Strange things, video tripods: after the cameras themselves, they are quite possibly the most owned piece of video equipment on the planet. They’re indispensable for secure, stable and portable camera support but are possibly the least understood, least written about and badly described pieces of kit you’ll ever own.

Researching either your first or next tripod purchase will quickly reveal hundreds, if not thousands of tripods out there, most listing their maximum and minimum figures for height and weight etc., but almost all missing the most important figures that are the heart and soul of a video tripod – rigidity and stability. In this day and age, this is a disgrace to the industry in my considered opinion. It seems inconceivable that the industry has failed to implement standards for testing and reporting such things as:

This makes choosing a tripod a very difficult task indeed. Combined with the tripod’s Cinderella status with regard to reviews and it is understandable that making an informed decision is almost impossible.

This was exactly the situation in which I found myself when my venerable Manfrotto 520’s displayed their total unsuitability to perform at a level required for HD video, especially when holding up a Canon XH A1. The 520’s had the shakes, wound up like a rubber band, warped with the slightest pressure on the pan bar and could be visibly bumped sideways by even a light gust of wind. The result, displayed on a 46” HDTV screen, was utterly disheartening. They had to go.

BUT! How to choose a replacement? Top of my “must have” list was the obvious:

My searches were very extensive, over a period of many months. It had become pretty obvious this purchase was going to be an expensive one, so it had to be right the first time, no second chances!

About half way through this period I discovered this: 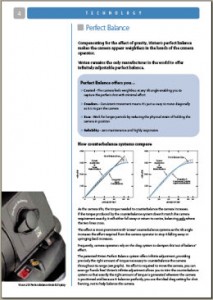 And much to my surprise, the interesting graphs on page 9, Section 7 therein. To my knowledge, they are the only figures of this sort published by any camera support manufacturer anywhere (I’d love to be proved incorrect in this – if you find some more, do let us know).

To cut a long story short, my final purchase decision was ultimately based on those graphs, along with Vinten’s reputation for excellence and my experiences dealing with them when sorting out issues with my already purchased Vinten Vision 3 head (this will be the subject of another review sometime soon).

What follows in the next few pages is, hopefully, as much detail as you could ever want about a system, maybe even too much information. I trust you find it useful.

Now, on to the review.

The full system purchased consists of the following components:

The last item was to allow my 75 mm Vision 3 head to be used with the 100 mm bowl FiberTecs, and does not really need a mini review in its own right. The only notable things about it are that its design is quite different from two other adapters I already owned, and it fits better with the FiberTec receiver. I strongly recommend it if you do purchase a Vinten tripod of any sort and require such an adapter. 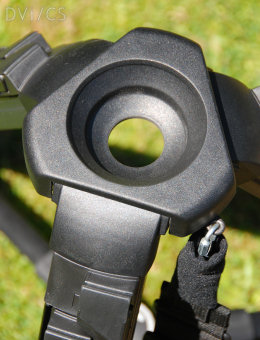 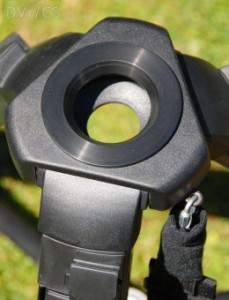 Move on to read Page Two…

Born in London, Ontario, Canada but transplanted to Tasmania, Australia at a tender age, where I spent most of my formative years. Decamped at 19 to “see the world,” and proceeded to hitch hike from Madras (India) to London (UK). Somehow surviving (despite many “life enriching experiences”), I spent most of the 70’s and 80’s in the UK computer industry, using my spare time to polish up my still photography skills. Quit the rat race for the first time in 1990 and spent 18 months travelling through China, Pakistan and India hauling round a monstrous bag of camera gear, somehow ending up back in Australia more or less by accident. Realized I’d taken a wrong turn 5 years later and headed back to Blighty for another decade. Finally fled the “big smoke” and headed to NZ with my Kiwi partner. Got into video with an XL1s but always knew HD would be the way to go, trading up to a Canon XH A1 (and a Nikon D80) December ’06. Have been throwing shed-loads of money at it ever since. Still coming to terms with this whole “moving image” thing. Despite my constant declarations of retirement, my shooting time is continually intruded upon by that 4 letter w**k word. A confessed perfectionist, I built a conservatory onto our London home with a micrometer being the main measuring instrument (true!). Despite my long computer association, have done more different jobs than I’ve had hot dinners, none of them as much fun as playing with cameras.