[Updated September 2016: Lumu is no longer supported on Android. Apparently the audio-jack interface on Android is too inconsistent to allow the Lumu to function well across the wide variety of devices.]

Lumu is a $149 incident-light metering attachment for iOS and Android devices [updated 2016: Android is no longer supported], developed in Slovenia as a Kickstarter project (the Lumu Labs folks asked for $20,000; when the campaign ended $244,085 has been pledged, over 12 times what they had asked for). Lumu is a self-contained incident meter: a light sensor and supporting electronics in a small aluminum housing with a hemispherical diffuser dome, connecting to a smartphone, iPod, or tablet using its 4-conductor headphone port. An app on the device communicates with Lumu and displays its readings. 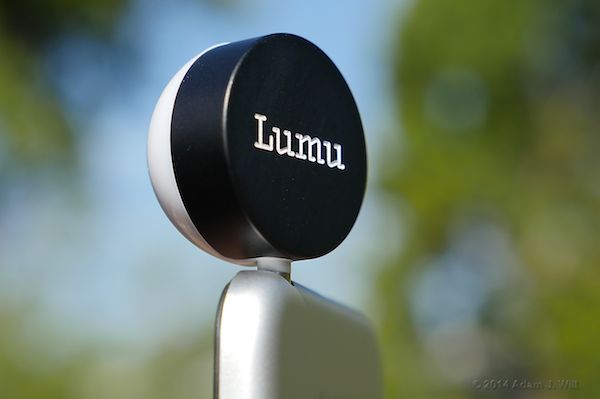 Lumu on an iPod touch 5G.

Lumu has been shipping for a few months, and Lumu Labs released a software development kit for third parties. Lumu Labs sent me a Lumu to evaluate for integration into Cine Meter II, and I spent a few days (and nights) testing it. Here’s what I found.

I don’t normally show unboxings. Indulge me; it’s worth it. 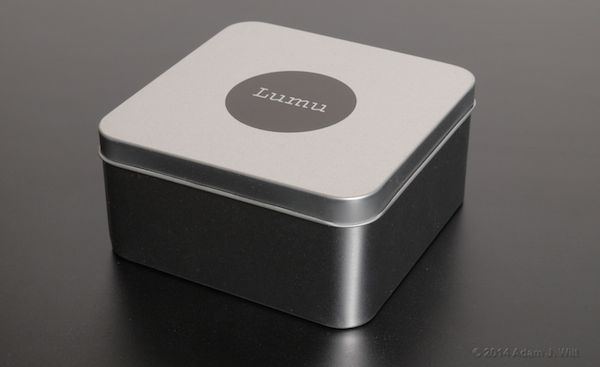 Inside the padded DHL envelope shipped in two days direct from Ljubljana, Slovenia, I found this metal box, roughly 4″ (10.5 cm) on a side. Opening it is very much like opening a package from Apple: 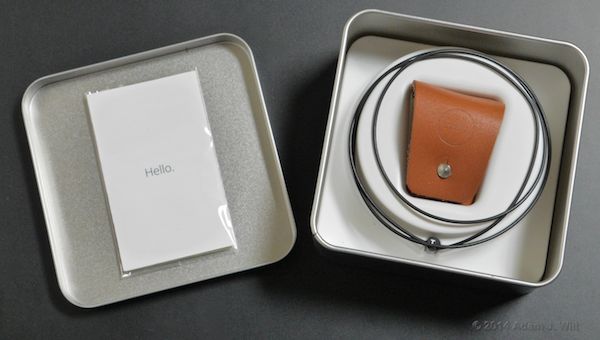 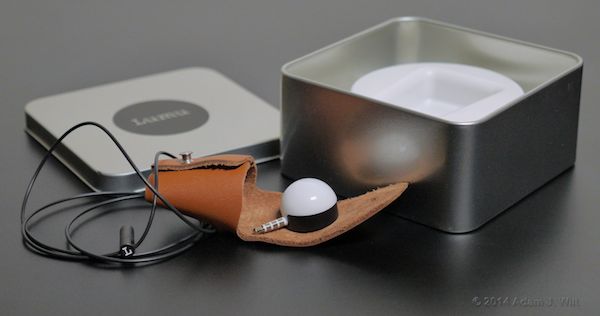 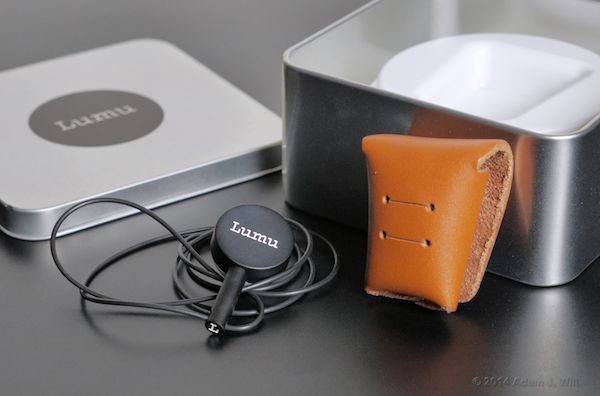 Lumu snapped into the Lumuneck. Lumubag is slotted to ride on a narrow camera strap. 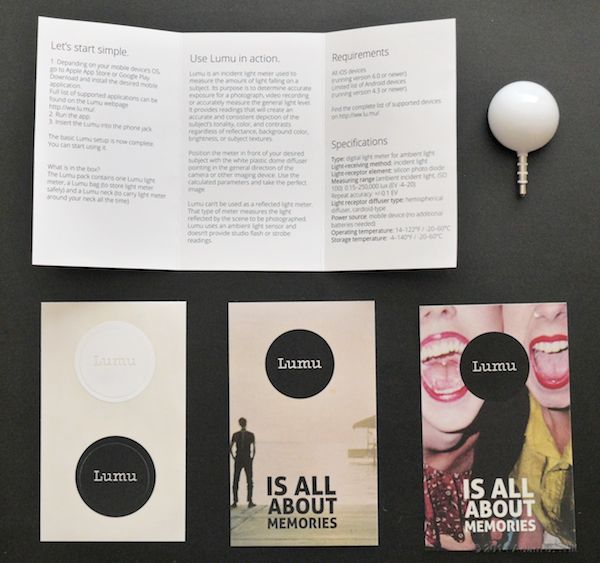 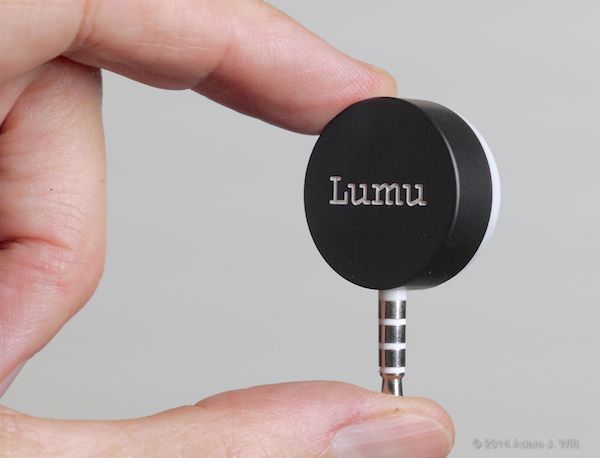 Lumu itself is 23mm in diameter: just under 1 inch. 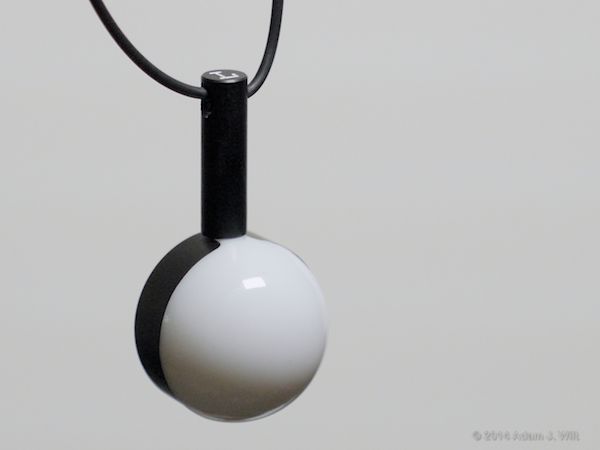 The Lumu plugs into the headphone port of your device, drawing its power from the headphone output and sending readings back as a microphone signal. The plug on the Lumu is designed so that the body of the sensor has 2.2mm of free space between it and the body of your device; it’s intended to leave enough room for an iPhone bumper or a thin case. 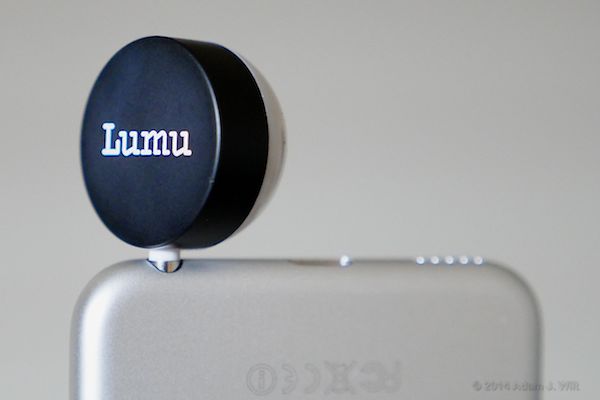 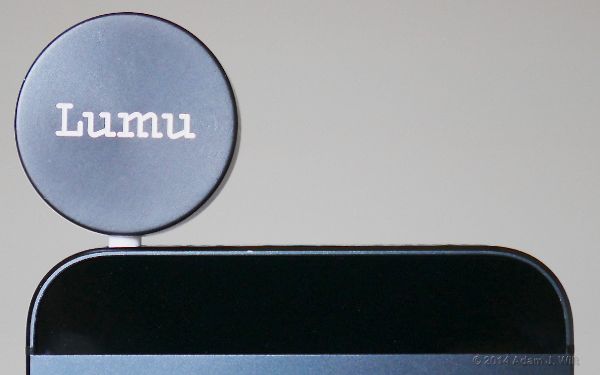 Lumu on a naked iPhone 5. 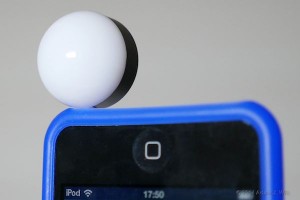 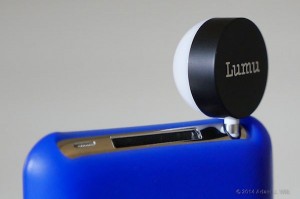 Lumu on iPod touch 4G with a thin silicone case.

Thicker cases like the Nugard KX on my iPhone or the Otterbox on my Galaxy need to be removed before Lumu will fit properly. 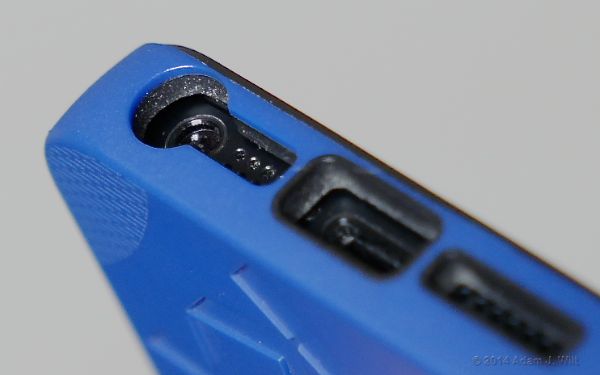 The Nugard KX case is too thick to allow Luxi to fit.

Lumu metering software is available for both iOS and Android. The apps are free.

Lumu, iOS 6.0 and above; also Lumu for Android 4.1 and above (see note below): a still photography metering app, displaying ISO, shutter speed, and aperture, and allowing you to set any two of the three parameters and measure the third. Exposure values can be set and measured in 1-stop, 1/2-stop, and 1/3-stop increments; a sliding bar under the measured value shows you fractional settings: a half-width bar under f/2.8 means you’re halfway between f/2.8 and the next reading (f/4 in full stops, f/3.5 in half stops, or f/3.2 in third stops). 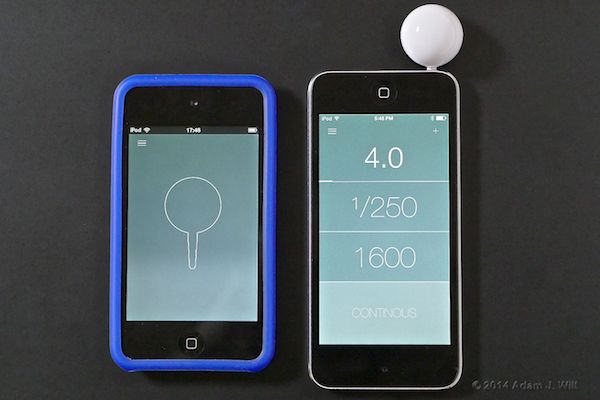 Lumu on iPod touch 4G and iPod touch 5G. On the 4G, the app is waiting for the sensor to be connected.

Lumu Pinhole, iOS 7.0 and above, is designed for pinhole camera photography. You set ISO and f-number (the app defaults to ISO 400 and f/200!) and the app shows you the required exposure time, in hours:minutes:seconds. Tap the display, and it gives you a countdown for your exposure time.

Lumu Video, iOS 7.1 and above, is for cine / video use. You can set ISO, frame rate, and shutter angle or shutter time, and the app will report the corresponding aperture. It also lets you set an ND filter or arbitrary filter factor compensation. You can vary ISO and aperture in 1, 1/2, or 1/3 stop steps, and the aperture reading is followed by a small “tenths digit” showing the  “distance” to the next reading (note: it’s only a tenth of a stop if you’re measuring aperture in full stops: it’s a 20th of a stop in halves, or a 30th in thirds). 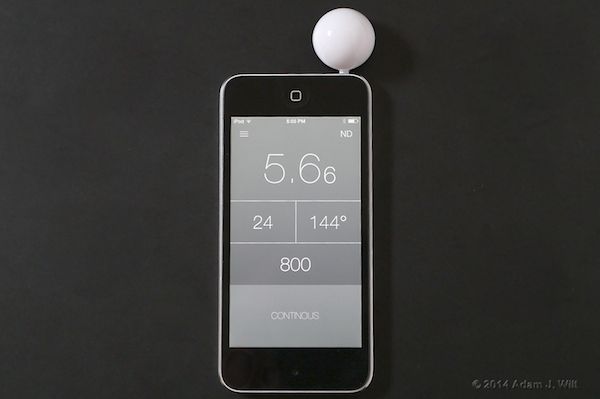 All apps allow you to calibrate both the Lux reading in percent, and an offset for exposure measurement in tenths of a stop. Lumu and Lumu Pinhole have reciprocity failure compensation; there’s a toggle for that in Lumu Pinhole, and in Lumu you set camera type to “analog” instead of “digital” (I didn’t test this, and I don’t know which reciprocity failure model the apps use).

Both Lumu and Lumu Video let you choose between one-shot and continuous metering (iOS versions only), and let you measure incident light in Lux or footcandles. Lumu and Lumu Pinhole let you capture readings as notes and share them on Dropbox. Lumu for iOS has an “average” mode with continuous metering; every time you tap the display Lumu logs the current reading, displays it in a graph at the bottom of the screen, and shows the average of all logged readings.

Android note [2016 update: Android is no longer supported by Lumu.]: Google Play says Lumu for Android works with Android 4.1 and up, while the app’s description says that the software works with the Samsung Galaxy Note 2, Samsung Galaxy S4, and HTC One. The instruction sheet in the Lumu box specifies Android 4.3 and up. I had no problem running version 1.1.1  on my Galaxy S II 4G (a.k.a. Epic 4G Touch, depending on carrier) running 4.1.2. 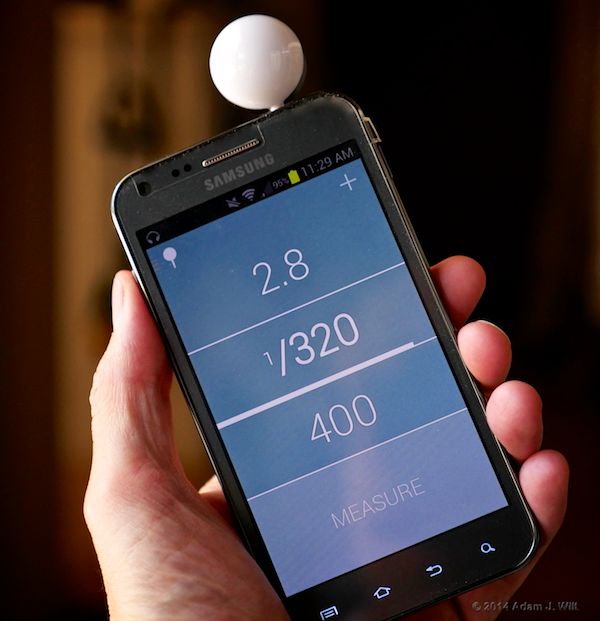 Comments on Google Play imply that it doesn’t work on the Nexus 4 and Nexus 5, at least with older software; that the Galaxy S4 needs to be running 4.3 or up; and that Lumu Labs says some Android devices don’t supply enough juice on the headphone jack to power the hardware.

(Since the Lumu sensor receives its power as an audio signal, Lumu Labs recommends turning off “volume limits”, if any, in device settings.)

As is often the case in the wild, wild west of Android software, it’s a bit of a crapshoot whether it’ll work on your particular ‘droid device.