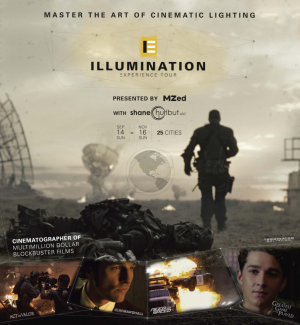 Shane Hurlbut’s Illumination Experience cinematography education tour finally wrapped this past weekend in Los Angeles, successfully completing a three-month tour of 26 cities across the United States. If you were one of the fortunate folks who attended his Lighting Masterclass or Cinematography Workshop (or both), then you’re already aware of everything it had to offer.

However, if you’re outside the USA, or the show didn’t come to your area, or if it was sold out in your city — which was often the case — you still have an opportunity to learn from this great contemporary Director of Photography. That’s because both Hurlbut’s “Illumination Experience” Lighting Masterclass and Cinematography Workshop will be available as HD downloads directly from the tour producer, MZed, a company founded by renowned portrait photographer Monte Zucker. MZed produces educational resources for photographers, filmmakers, and graphic designers. Their past tours include The Art of Visual Storytelling Tour with Oscar Nominated DP for the Saturday Night Live Film Unit Alex Buono, Three-time Cannes Lions award-winner Vincent Laforet’s Directing Motion Tour, and Emmy-nominated editor for the Saturday Night Live Film Unit Adam Epstein’s Cutting Edge Tour.

The Illumination Experience Cinematography Workshop ($400) is a hands-on, immersive class covering both cinematography and lighting. The workshop is divided into three phases: discovery, creation, and execution. Shane teaches you how to design, develop, enhance, and implement the storytelling process with lighting and camera. Using live demonstrations, Shane explains how to manipulate the quantity and quality of light, how to diffuse, how to use color, how to create depth and separation, and how to block scenes in a way to deliver the greatest emotional impact. You’ll learn how to determine which qualities of light to implement for any scene by utilizing script analysis, storyboard preparation, lighting schematics, and shot lists. The workshop covers a lot of ground, from lighting basics through full cinematic setups, to camera operation and exposure management, to on-set color controls, plus post-production tips and more. When purchasing, be sure to apply the DV Info Net promo code IETDVI for a discount.

The other component of the Illumination Experience tour is Shane’s Lighting Masterclass ($599), a day-long hands-on intensive consisting of two live shoots. It was presented in a third of the cities on the tour. In it, students follow Shane’s lighting schematics to re-create film scenes from Crazy / Beautiful (2001) and Swing Vote (2008). Under Shane’s guidance, students learn to integrate methodical lighting with precise camera motion to achieve impactful results. They experiment with gear such as the Fisher 10 Dolly, the Movi, and the Kessler Crane in conjunction with various lights, filters, flags and bounces. Shane critiques each scene and provides customized feedback to each team. This masterclass will have you utilizing Shane’s lighting playbook, tools, and techniques to enhance your skill set exponentially. When purchasing, be sure to apply the DV Info Net promo code IETDVI for a discount.

“There’s much mystery involved with building a beautiful cinema scene. Shane has skillfully demystified the process, giving us his knowledge, and a starting point that would have taken me years to figure out on my own.” — Woody Harrison, Dallas, TX

Shane Hurlbut, A.S.C., is a world-renowned cinematographer who has shot multimillion dollar blockbuster films such as Act of Valor, Drumline, Terminator: Salvation, The Rat Pack, and We Are Marshall, among many others. Shane is a member of the prestigious American Society of Cinematographers and The Academy of Motion Picture Arts and Sciences. He is among a select group of cinematographers recognized by Canon as an “Explorer of Light” and by the Tiffen Company as an “ImageMaker”.

Check out these video clips as well:

…and testimonials from paying customers.