Grenoble, France, 8th April 2015: Aaton-Digital has begun delivery of its landmark 24 track location sound recorder, the Cantar-X3. It is already being put to work by professionals in Amsterdam, Tel-Aviv, Paris, Los Angeles and Montreal as the company continues to fulfil orders. Recorders for North American companies Location Sound, Los Angeles; Audio Services Corp, Canada; and Sonotechnique, Quebec will be delivered prior to the start of NAB 2015. 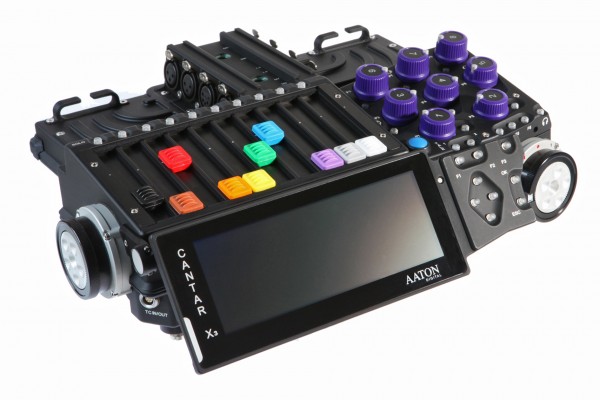 The Cantar-X3 surpasses the quality of it predecessor, the Cantar-X2. By using state of the art technologies and components this modern and modular platform is future-proofed for decades to come. An optional Dante board allows connection to the popular Audinate’s network.

The Cantarem 2 is the companion assignable 12 track mixer for the Cantar-X3, with more accessories and functionalities coming soon.

Tully Chen, a production sound mixer from Tel Aviv, Israel, whose work includes documentaries ,TV drama and series, commercials but mainly feature films said “It is a joy to work with the new machine . Audio quality is superb; the faders are silky and responsive. It has already become a part of me.”

For the last ten years, the Aaton Cantar-X2 has been the ultimate benchmark for audio field recording.

Today, a totally new machine, the Aaton Cantar-X3 has been designed by the same team that created its predecessor. It combines the ergonomics of the X2 and its outstanding microphone preamplifiers which have been redesigned to improve filtering possibilities and reduce further the noise level, also new functionalities such as an optional Audinate’s Dante IP networking, while additional features are accessed through an improved human interface with new display based menu control. Sister company Transvideo has designed the SuperBright™ display.

Its avionics aluminium machined housing, water and dust-proof with a durable coating coming from military industry, together with an exceptionally long run time makes it the perfect portable tool for outside location work. Extended linear faders, smooth rotary knobs and silent switches are provided for a practical working environment.

External devices can be simultaneously linked to the Cantar-X3 through widely used audio and computer connectors adding new capabilities for this machine to be scalable for the next twenty years.

Aaton Digital’s new Cantar-X3 24 track digital audio recorder has received a prestigious Cinec Award, presented on September 22nd 2014 in Munich, Germany during the Cinec Expo. The award was presented to Aaton-Digital & Transvideo CEO Jacques Delacoux by the Society of CineTechnik Bayern e.V. (CTB, formerly Bavarian Society for the Advancement of Film Technology), and awarded in the category of Innovative and trendsetting products and developments in Motion Picture Technology.

At Cinec, on receiving the Cinec Award, Jacques Delacoux said “These two awards recognize the outstanding work done by the Aaton-Digital team and already place the machine as the ultimate On-Location digital audio recorder.”

Established in Grenoble, France, since the early 70s, French Company Aaton made a name for itself with innovations which became widespread in the film industry: in camera time recording, Super 16, built-in video assist, film code readers and accurate data management for non linear editing systems.

Over the last 40 years, Aaton product design, insisting on putting ergonomics first, has given the filmmakers the tools they need to better serve their trade, create new aesthetics and adapt to a constantly evolving industry.

In June 2013, TRANSVIDEO’s holding company Ithaki acquired AATON that became Aaton-Digital. Since this time, Aaton-Digital developed the Cantar-X3, the most advanced on location sound recorder that received a Cinec Award in 2014.