Placentia, California, April 6th 2015 – Today CalDigit, the company of choice for the content creation industry, announces that the T3 Thunderbolt™ 2 RAID storage solution has now been upgraded to support RAID 5, and is available to pre-order from today. The T3 RAID 5 will start shipping from April 20th 2015. Starting at under $500, with speeds over 500MB/s, a 5 year warranty, and now RAID 5 support, the T3 offers professional users outstanding value.

The T3’s unique 3-bay design allows CalDigit to offer RAID 5 in a form-factor traditionally found in larger multi-bay storage towers. With a price point starting at $499 for the 1.5TB model, the T3 has made the barrier of entry for RAID 5 storage incredibly accessible for professional users. 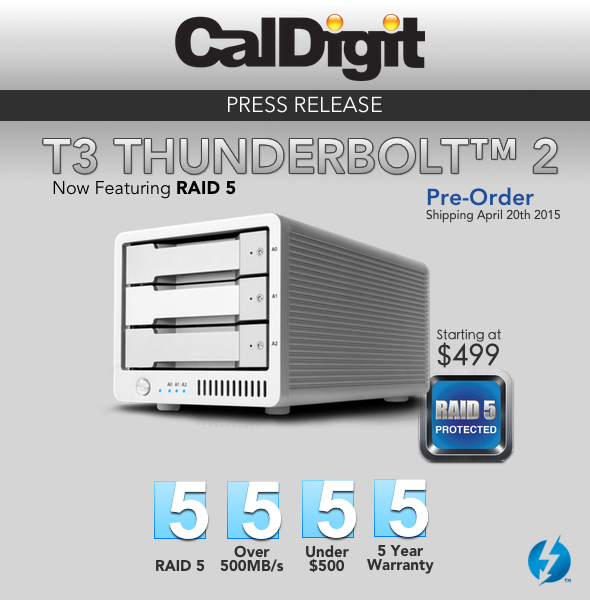 In smaller form-factor RAID storage most people use 2-bay RAID 0 storage that does not offer single drive redundancy. However, the T3 offers RAID 5, which means that in the unlikely event of a drive failure all user data is still available and users can carry on working. This is not available on storage solutions that only feature RAID 0. When used in RAID 5 mode the T3 offers the same transfer speeds as a 2-bay RAID 0 device, as well as single-drive redundancy.

“CalDigit decided to make a smaller form-factor RAID with an extra drive bay compared to the other products on the market that feature 2-bays. This has allowed us to implement RAID 5 into the T3 staring at just $499”, said Kosta Panagos, Director of Marketing at CalDigit.

The T3 with RAID 5 is available to pre-order from today starting at $499 MSRP for the 1.5TB HDD version direct from the CalDigit Online Stores, and will be shipping from April 20th 2015.

CalDigit (www.caldigit.com)   is vertically integrated in designing, building, and assembling all of our products. Our impeccable attention to detail resulted in the ability to provide users with unparalleled support. We use only the best quality components delivering solid and durable products which has made us the company of choice for the content creation industry.

Thunderbolt™ and the Thunderbolt™ logo are trademarks of Intel Corporation in the US and other countries.