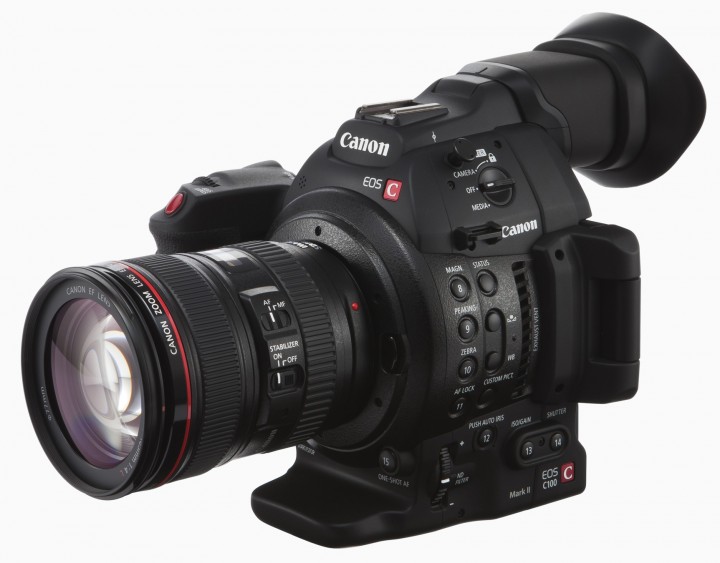 “Canon’s commitment to the advancement of tools for visual expression takes another major step forward with the introduction of the EOS C100 Mark II Digital Video Camera,” said Yuichi Ishizuka, president and COO of Canon U.S.A., Inc. “Drawing on input from Canon’s global community of Cinema EOS camera users and from digital filmmakers using Canon EF lenses – 100 million of which have now been produced worldwidei – the Company has added new capabilities to the EOS C100 Mark II from its predecessor that powerfully leverage our considerable expertise in optics, imaging, and digital signal processing. The result is an improved, affordable Super 35mm CMOS digital camera that is designed to provide outstanding HD image quality, operational performance, ergonomics, and workflow convenience.”

Optimized for one-person operation, the new EOS C100 Mark II camera has a mobile core design enabling users to choose their preferred style of shooting. The existing design has been enhanced to include a large-size detachable eyecup for the camera’s large 68-degree tilting 0.45-inch 1.23 megapixel color EVF (electronic viewfinder). Clearly marked red trigger buttons on the camera body, top handle, grip, and a built-in mono microphone on the camera body — for times when the top handle is not attached — can be used to capture basic sound for audio notation or as an aid to audio syncing during post.

Another major redesign of the new EOS C100 Mark II over its predecessor is an innovatively hinged 3.5-inch 1.23 megapixel OLED display panel, delivering 100 percent field-of-view coverage, wide color range support, and improved viewing even in bright sunshine. The new hinge design — which folds the panel shut when stowed, protecting the OLED surface — opens 180 degrees to reveal function keys and a joystick. The panel can open even further to 270 degrees to deploy against the side of the camera to provide monitoring for directors and other production personnel. Additional design improvements on the camera body include 17 assignable recessed function buttons, dual SD card slots with a transparent cover, and a simplified battery insertion and removal release.

Previously available only as an optional upgrade for earlier Cinema EOS models, Dual Pixel CMOS AF is a standard feature on the new EOS C100 Mark II, providing enhanced autofocusing capability. The Dual Pixel CMOS AF technology helps provide smooth and consistent autofocus, so that focus transitions are natural looking and subjects can remain in focus even as they move off center. In addition, the compatibility of Dual Pixel CMOS AF with Canon EF autofocus lenses combines outstanding optical tools with a wide range of creative options. It’s ideal for shooting sports, weddings and many more productions where focus pulling by a single operator is not feasible, such as when the video camera is attached to steadicams or drones. The EOS C100 Mark II Digital Video Camera also includes Face-Detection AFii, a first in the Cinema EOS camera line, which utilizes contrast detection AF to maintain focus across most of the image plane, an advantage in one-person electronic news gathering (ENG) situations.

Central to many of the new features of the new EOS C100 Mark II Digital Video Camera is its advanced Canon DIGIC DV4 image processor. The Canon DIGIC DV4 image processor separates the RGB output from the camera’s 8.3 Megapixel CMOS imager into three individual 8 megapixel signals (as opposed to 2MB in the EOS C100) for noticeably improved image quality. The Canon DIGIC DV4 processor also includes a new debayering algorithm to help minimize moir, and reduce video noise even at high ISO speeds. (high-sensitivity recording on the camera ranges from ISO 320 to 102,400).

Another important benefit of the Canon DIGIC DV4 processor is Full HD recording in both the high-quality professional format AVCHD or the popular web-friendly MP4 format at a variety of bit rates (up to 28 Mbps and 35 Mbps, respectively), resolutions, and frame rates (up to the smooth look of 59.94p) to suit practically any production need.iii For special-effect requirements, slow and fast motion MP4 recording at up to 1920×1080/60p can also be performed. 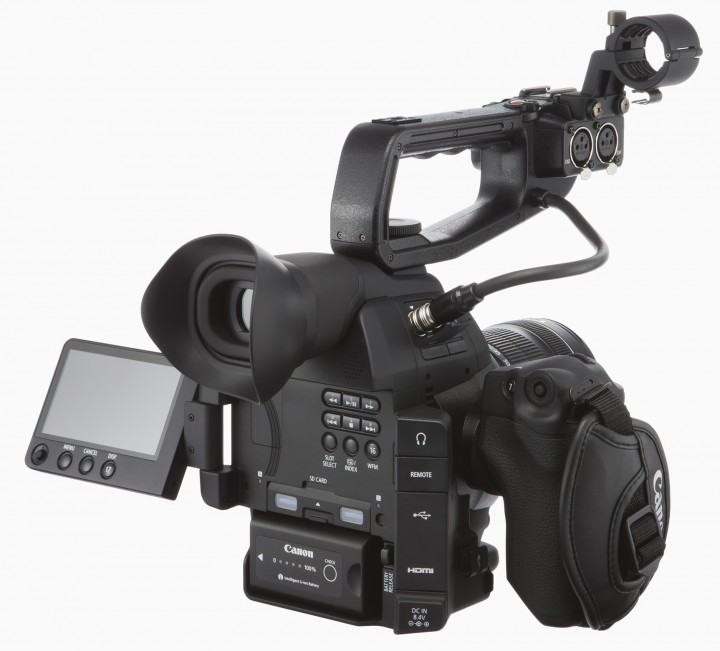 Users can choose from multiple formats that support MP4 or AVCHD to suit a wide variety of production, post, and output needs. The EOS C100 Mark II camera’s dual SD card slots can record in one or both formats simultaneously for back-up, or convert AVCHD and MP4 files into smaller MP4 files for web upload.v Extended clip times can be achieved by recording continuously from one card to the other without a break. In addition, a Data Import Utility application is included that can seamlessly join divided files to help reduce work during editing and to import video file data from an SD card inside the camera or a card reader.

As with the other cameras in Canon’s Cinema EOS line, the new EOS C100 Mark II Digital Video Camera includes Canon Log as a recording choice, providing maximum dynamic range for post-production color grading. New, however, is the addition of a built-in LUT (look-up table), enabling users to view the camera’s live video signal in Wide DR (dynamic range) or the BT.709 (TV standard) color space on the OLED or any external monitor connected to the camera’s locking HDMI® output (this feature can be turned off in the menu). Uncompressed video output (with time code data and 2:3 pull-down markers superimposed) can be output via HDMI to an external recorder.

The addition of wireless file-transfer capabilities further expands the versatility of the new EOS C100 Mark II camera for multiple production applications, including transferring time-critical news video or backing-up files. Utilizing dual 5 GHz and 2.4 GHz frequencies, the camera can transfer video files via FTP server for instant relay, or send MP4 video to the web browsers of laptops or tablets for viewing and storage (even on PC’s lacking playback software). Remote control of the camera is also enabled via a compatible smartphone, tablet, or laptop. The new EOS C100 Mark II Digital Video Camera also includes compatibility with the optional multi-functional Canon RC-V100 Remote Controller, which can be used to adjust image quality and other important operations from a distance, a handy feature for shooting from a jib arm, drone, or other inaccessible location.

In addition, the optional Canon GP-E2 EOS GPS Receiver can be connected to the EOS C100 Mark II Digital Video Camera using a USB cable to record location and time information during shooting, a helpful feature for editing and archiving.

The Canon EOS C100 Mark II Digital Video Camera is scheduled to be available at the end of December 2014 for an estimated retail price of $5,499.00.

Canon U.S.A., Inc., is a leading provider of consumer, business-to-business, and industrial digital imaging solutions. With approximately $36 billion in global revenue, its parent company, Canon Inc. (NYSE:CAJ), ranks third overall in U.S. patents granted in 2013+ and is one of Fortune Magazine’s World’s Most Admired Companies in 2014. In 2014, Canon U.S.A. has received the PCMag.com Readers’ Choice Award for Service and Reliability in the digital camera and printer categories for the 11th consecutive year. Canon U.S.A. is committed to the highest level of customer satisfaction and loyalty, providing 100 percent U.S.-based consumer service and support for all of the products it distributes. Canon U.S.A. is dedicated to its Kyosei philosophy of social and environmental responsibility. In 2014, the Canon Americas Headquarters secured LEED® Gold certification, a recognition for the design, construction, operations and maintenance of high-performance green buildings.

Availability, prices, and specifications of all products are subject to change without notice. Actual prices are set by individual dealers and may vary.
i Refers to EF Lenses, EF-S Lenses and Cinema Lenses produced worldwide from 1987 to First Half of 2014.