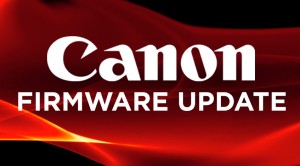 To learn more about the firmware updates and their availability, please visit usa.canon.com/support