Recently:
You are at:Home»News»Cine Meter II updated to include color metering

Cine Meter II continuously reports the correlated color temperature and green/magenta tint of the light, and tapping the temperature and tint readouts calls up a color correction panel suggesting the gels needed to match the lighting to your camera’s target white balance.

Color metering was made possible by new APIs in iOS 8. After considerable testing and three false starts, developer Adam Wilt came up with a calibration method to improve the accuracy of the default measurements. He says: “Cine Meter II closely matches other color meters on full-spectrum lights such as tungsten or sunlight. For lights with ‘spiky spectra’ such as fluorescents, LEDs, and HMIs, no two color meters seem to agree with each other, but Cine Meter II is usually no worse at reporting temperature and tint than ‘real’ meters under the same conditions.”

Adam has posted test results at http://www.adamwilt.com/cinemeterii/colormetering.html showing how Cine Meter II’s readings compare with those of color meters from Minolta, Sekonic, and Asensetek. “Two months of beta-testing by cinematographers worldwide confirmed that Cine Meter II’s color measurement is ‘good enough for production use,'” he reports. “So now it’s released for everyone.” 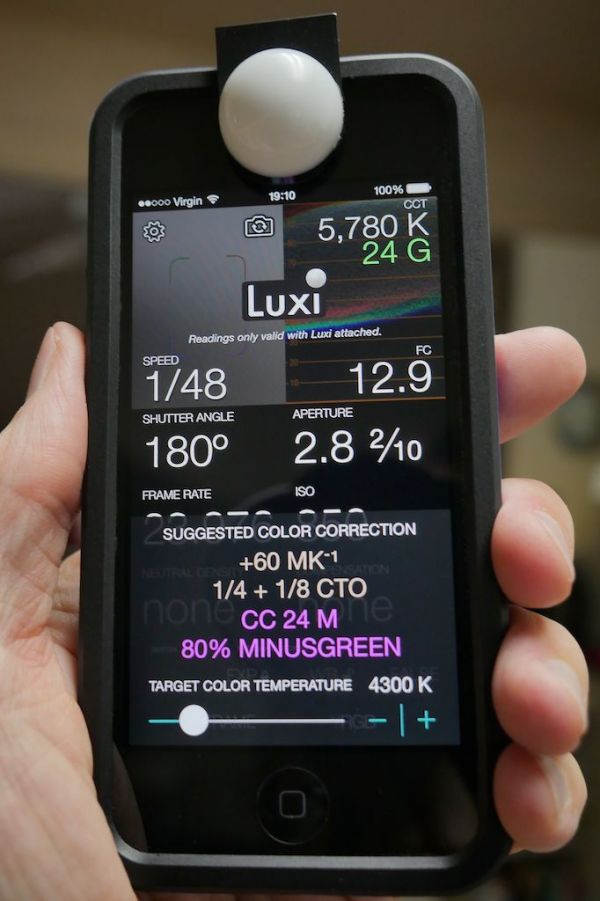 Color metering works in incident modes using Luxi and Luxi For All clip-on photospheres. It can also be turned on for reflected readings, but you need to make sure you’re focusing Cine Meter II on a truly color-neutral target for proper results.