Digital Heaven today announced their freeware range for Final Cut Pro X has been significantly enhanced with the addition of 10 video plug-ins that were previously on sale for almost $180. These free plug-ins bring some powerful features to Final Cut Pro X including animated counters, split-screen effects, burned-in subtitles, fixing of dead pixels on footage and six dynamic transitions making them a must-have package for any video editor.

London, UK – Tuesday 16 July 2019 — Digital Heaven, the company behind the SpeedScriber automated transcription app for macOS, today announced the launch of a new version of Freeware for Final Cut Pro X and Motion.

As one of the pioneering plug-in developers for Final Cut Pro over the past 16 years, Digital Heaven has a long track record of making some of their plug-ins available for free. Most recently that has included DH_GridX and DH_WideSafeX. Now six transitions plus two generators and two effects have been added to the freeware package.

In addition, some of these plug-ins have been improved for this freeware release:

4 x Generators
— DH_CounterX: Creates animated timers with many configurable options. (Previously on sale for $29.99)
— DH_GridX: Displays a grid with up to 30 divisions to help with lining up on-screen elements.
— DH_SubtitleX: The easy way to create subtitles with auto-sized background boxes. (Previously on sale for $29.99)
— DH_WideSafeX: Provides 4:3, 14:9 and 16:9 action and title safe areas whilst working in 16:9 aspect ratio projects. 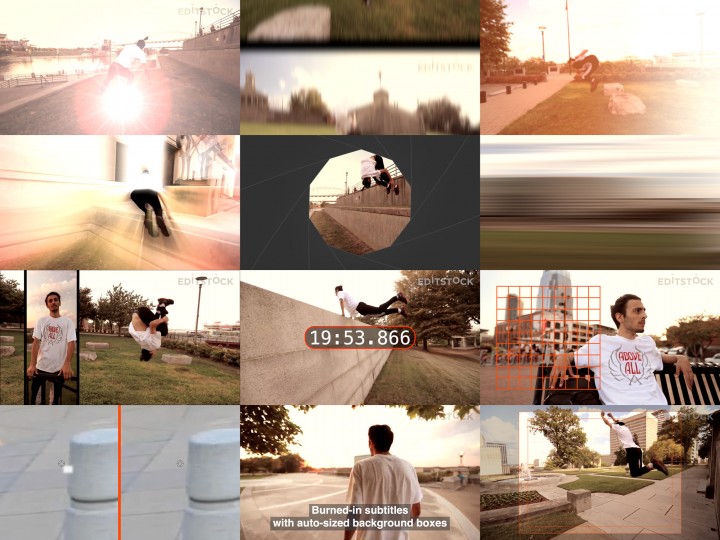 Digital Heaven was founded in 2000 by ex-BBC video editor Martin Baker. For six years the company provided broadcast post production facilities for clients such as the BBC, Channel Four and many independent production companies. After the success of their first software products, the company shifted its focus in 2005 to exclusively concentrate on software development. Since then, the company has launched a total of 26 Final Cut Pro plug-ins, 6 macOS apps and 2 eBooks.

SpeedScriber which launched in September 2017 is now the main focus of the company. Using pre-purchased minutes, the macOS app provides fast and high-accuracy automated transcription and caption creation for professional content creators. Transcripts can be reviewed and edited in the app then exported to multiple formats with support for Avid Media Composer, Apple Final Cut Pro X and Adobe Premiere Pro CC.

All trademarks appearing herein are the property of their respective owners.