Valhalla, N.Y., August 23, 2019 — Fujifilm is pleased to announce the addition of two portable lenses as part of the UA Series of 4K broadcast lenses: the FUJINON UA18x7.6 and FUJINON UA23x7.6. Both lenses feature a compact and lighter design with an economical price point. The use of unique optical technology delivers outstanding image resolving power and rich tonal gradation.

The new UA18x7.6 is a lens designed for a range of applications, including news-gathering, sports, house of worship, and entertainment production. The F1.8 lens features a 7.6-137mm focal length plus a 2x extender, and is only 3 ½ lbs. The UA23x7.6 is an economical F1.8 UHD telephoto zoom for studio and field production. It has a 23x zoom range of 7.6-175mm plus a 2x extender and weighs just 4.2 lbs. Both new UA series lenses have High Transmittance Electron Beam Coatings (HT-EBC), as well as the same HDR and 2/3-inch 4K performance as the rest of the UA series. 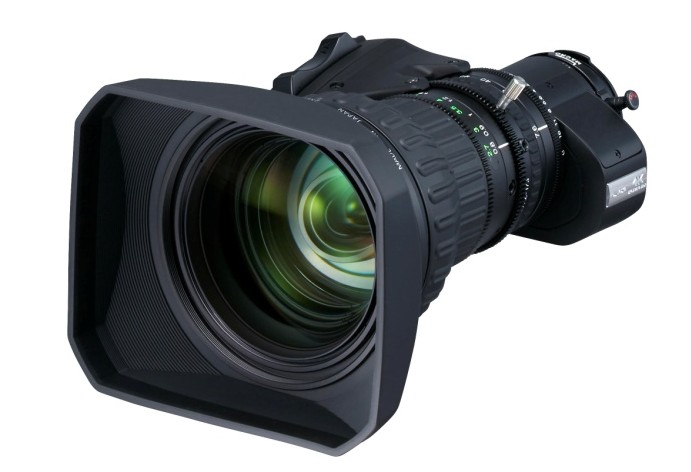 Fujifilm will begin delivery of the UA18x7.6 in September 2019 and the UA23x7.6 will ship in October 2019. The addition of these two new lenses expands Fujifilm’s 2/3-inch UHD broadcast lens lineup to a total of 13 models in support of quality 4K video production.

Predicting the arrival of the age of 4K video, Fujifilm launched the world’s first 4K broadcast lens in 2015. The company has since expanded its lens lineup to include compact, lightweight portable lenses and box types offering high-magnification zoom, thereby contributing to the expansion of the 4K broadcasting market. 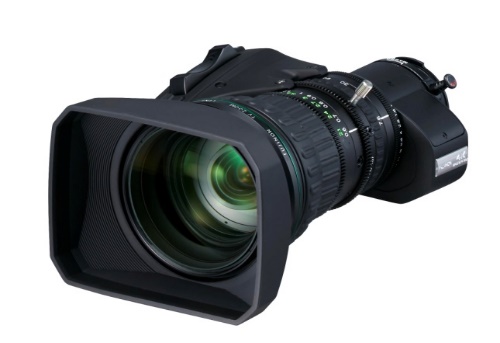 The two models contain Extra-Low Dispersion (ED) and fluorite lens elements to control various types of aberrations to achieve amazing sharpness. The company’s unique multi-layer coatings (High Transmittance Electron Beam Coating) help achieve rich tonal gradation to produce 4K video of astonishing quality. These 4K lenses will improve the performance of an HD broadcast camera. That means users can make effective use of their existing broadcast equipment in achieving results of greater image quality, and at the same time be prepared for the future of 4K.

Fujifilm will showcase these new products at the Beijing International Radio, TV & Film Exhibition (BIRTV2019), held in Beijing, China from August 21 to August 24.

FUJINON lenses by Fujifilm are known for high-quality eloquent images and have been used in various production sites including movies, TV commercials, and live sports broadcasts around the world. Fujifilm will continue to tap into its optical, high-precision forming and assembling technologies that have been nurtured over many years in the cutting-edge field of video expression, to further expand and enhance its 4K lens lineup, thereby addressing the diversifying needs at the forefront of video production.

Valhalla, N.Y., August 20, 2019 — Fujifilm is pleased to announce the development of the 4K broadcast lens, the FUJINON UA107X8.4 AF (Advanced Focus), the world’s first box lens that features the Advanced Focus function.* The UA107x8.4 AF is due to be released in the spring of 2020. 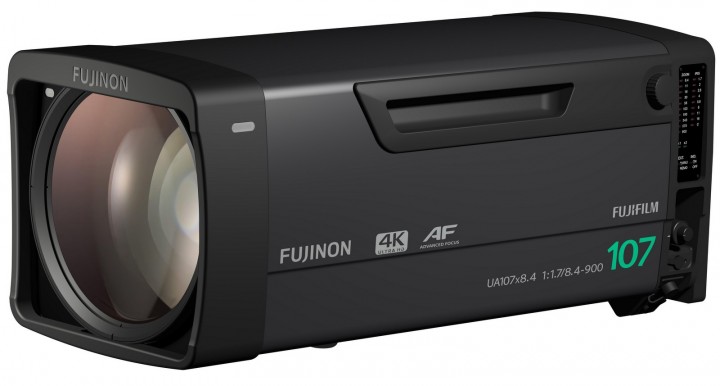 Among the features that make this lens a perfect choice for covering live sports and entertainment are High Dynamic Range (HDR) and vivid color reproduction. In addition to using aspherical and fluorite elements** to effectively control various types of aberration, the company’s unique multi-layer coating (High Transmittance Electron Beam Coating) boosts the rate of light transmittance, making it possible to deliver vivid color reproduction, as well as HDR-based rich tonal gradation, even under bright sun or at dusk.

The UA107x8.4 AF is a revolutionary product that will transform the way video is produced, as it allows for shooting high image quality 4K video with ease.

The penetration of 4K-compatible large-screen television in recent years has increased opportunities for enjoying ultra-high-definition 4K video. As such, advanced skills are required from camera operators to manually achieve fast, precise focusing. To meet the needs of today’s videographers, Fujifilm has developed a 4K-compatible broadcast lens equipped with the AF function.

FUJIFILM Holdings Corporation, Tokyo, Japan, brings cutting edge solutions to a broad range of global industries by leveraging its depth of knowledge and fundamental technologies developed in its relentless pursuit of innovation. Its proprietary core technologies contribute to the various fields including healthcare, graphic systems, highly functional materials, optical devices, digital imaging and document products. These products and services are based on its extensive portfolio of chemical, mechanical, optical, electronic and imaging technologies. For the year ended March 31, 2019, the company had global revenues of $22 billion, at an exchange rate of 111 yen to the dollar. Fujifilm is committed to responsible environmental stewardship and good corporate citizenship. For more information, please visit: www.fujifilmholdings.com

* Among 4K-compatible broadcast lenses as of August 19, 2019, according to Fujifilm

** Lens element made of fluorite, which has a characteristically small chromatic dispersion in light transmittance and refractive indices. It enables optical design with minimal chromatic aberration.