Recently:
You are at:Home»News»G4: Next Generation of Sennheiser Evolution Wireless

25 Jan. 2018 — Wedemark / Anaheim — Sennheiser Evolution wireless users have come to expect an ever-evolving feature set with each new microphone generation, and evolution wireless G4 is no exception: With a sleek new user interface, a generously expanded switching bandwidth and higher RF output power for the 300 and 500 series, new multi-channel functionality for the 100 series and brand-new on-camera systems, G4 delivers high-quality, reliable audio for musical performances, houses of worship, theatres, business and education settings as well as camera work. Launched at NAMM, the series will be available from April 2018. 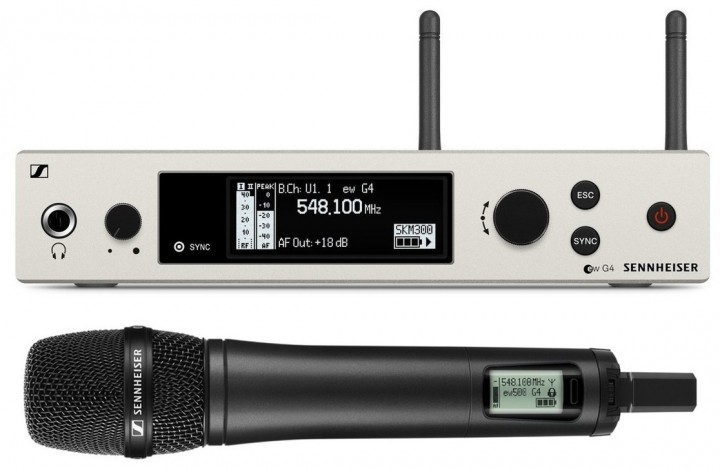 “With evolution wireless G4, we have built on the extremely rich feature set of the G3 series, expanding its capabilities even further, while still maintaining the compelling pricing of the preceding generation,” said Dennis Stegemerten, product manager for evolution wireless G4. “Many user-inspired improvements have been included, and all systems will be fully compatible with all previous evolution wireless generations, safeguarding our customers’ investments.”

A familiar family evolves with some significant additions

evolution wireless G3 users will recognize the familiar 100, IEM, 300 and 500 sub-series – but there are some important additions: There are brand-new professional sets for ENG and film work in the 500 series, three new Base Sets in the 300 series, as well as upgraded Vocal Sets and a new Combo Set in the 100 series.

Bands, houses of worship and community theatres will find their ideal wireless solutions within the 100 G4 and 500 G4 series.

The 100 series comprises Vocal Sets that include the acclaimed capsules of the evolution e 835, e 845, e 865, e 935, and e 945 microphones. Also available are an Instrument Set, a Headmic Set and two Lavalier Sets with either the ME 2-II (omni) or ME 4 (cardioid). All transmitters and the receiver are also available separately.

Compared to G3, the 100 series impresses with new multi-channel capabilities: Up to 12 wireless systems can now be daisy-chained for simultaneous programming via an enhanced Easy Set-up function. The daisy-chain cable comes included, as do rack-mount ears for professional use. The orange LCD display of G3 has been replaced with a high-contrast black and white LCD display. Also new are a sync LED and an Escape button for more convenient and quicker operation. The 100 series handheld features a new lightweight aluminum housing, and a programmable mute switch for singers or speakers seeking full control of their audio signal. Also new is a 100 series Combo Set that includes a rack-mount receiver, a handheld transmitter with e 835 capsule, and a bodypack transmitter with ME 2-II clip-on.

The ew G4 500 series is ideal for bands, theatres and houses of worship that require an expanded feature set, greater range, more spectrum flexibility and the additional control options offered by the Wireless Systems Manager software. Available systems include Vocal Sets with e 935, e 945 and e 965 capsules, an Instrument Set, a Lavalier Set with professional MKE 2 clip-on, as well as individual receiver and transmitter units.

500 series users are now greeted with a brand-new, contrast-rich black and white OLED display with automatic dimming, a convenient jog wheel, blue Sync LED, red warning LED and an Escape button that makes navigation much easier. The switching bandwidth of the series has been expanded considerably to rival Sennheiser’s professional 2000 series, with bandwidths of up to 88 MHz and up to 32 channels. The RF output power has been increased to 50 mW, switchable in three steps (10, 30, 50 mW) to expand transmission range or adjust to difficult RF environments, and all bodypacks feature increased protection from humidity and moisture.

The IEM series receives similar enhancements to user-friendliness as the 500 series: a contrast-rich black and white OLED display, a convenient jog wheel, automatic dimming, blue Sync LED, red warning LED and an Escape button for quick and easy navigation. The RF output power has been increased to 50 mW, and the bodypacks come with protection from humidity and moisture – ideal for stage work. Individual units are available, as are a single and a Twin IEM Set.

The 100-p G4 series includes the ew 135-p G4 Portable Handheld Mic Set, two Portable Lavalier Mic Sets, the 112-p G4 (omni) and the ew 122-p G4 (cardioid), as well as the ENG Combo Set, which combines the camera receiver with a plug-on transmitter and a bodypack transmitter with omni ME 2-II clip-on.

Compared to the 100-p series, the 500-p systems operate with a higher switching bandwidth of up to 88 MHz (compared to 42 MHz) and thus a higher channel count. Additionally, the systems feature a selectable output power of up to 50 mW and are less sensitive to moisture. All 100-p and 500-p series components are also available separately.

For business and education: the 300 series

Targeting users in corporate, hospitality and education settings, the 300 series comprises a Vocal Set with an e 865 microphone head, a Lavalier Set with the ME 2-II clip-on, and a new Headmic Set which includes the SL HEADMIC 1, the pro’s choice for speeches and lectures.

Also new in the series are the Base Sets, which provide a cost-efficient way to update or expand existing evolution wireless systems. All Base Sets include a receiver and transmitter but come without the microphone or the microphone head, ready for use with existing accessories. There are Base Sets that include a handheld or a bodypack, or a Combo Set with both options. Handhelds, the bodypack and the receiver can also be ordered separately.

The 300 series features an increased switching bandwidth of up to 88 MHz or up to 32 channels, allowing for large set-ups in multiple rooms. The series features the same new user interface and increased output power of 50 mW as the 500 series. The bodypacks’ protection against humidity has been improved too. An integrated network port allows for remote control and monitoring via the Wireless Systems Manager or the convenient Sennheiser Control Cockpit software. Meanwhile, the receivers are ready for integration into the LSP 500 PRO wireless loudspeaker system.

Kai Tossing, Portfolio Manager, Business Communication: “With the availability of ew G4, we will also issue a new version of Sennheiser Control Cockpit. This software allows users to centrally and remotely control their wireless systems in real-time via a web browser on their smartphones, tablets or laptops. Sennheiser Cockpit Control will not only work with SpeechLine Digital Wireless and the new G4 systems but also with Digital 6000.”

All evolution wireless G4 systems will become available from April 2018.