New HERO+ LCD makes it easier than ever to GoPro with Built-In
Touch Display, In-Camera Video Trimming and Integrated Wi-Fi

SAN MATEO, CALIF. (June 1, 2015) – GoPro, Inc. (NASDAQ:GPRO), enabler of some of today’s most immersive and engaging content, has announced the availability of its new HERO+ LCD camera. Capturing life-like high definition 1080p60 video and 8MP photos, the HERO+ LCD features a convenient touch display for easy shot framing, settings control and access to an all-new in-camera video trimming feature. Like the entry-level HERO, the HERO+ LCD is built directly into its waterproof housing. The simplicity of this all-in-one design now combines with expanded features to make capturing life’s memorable moments easier than ever. 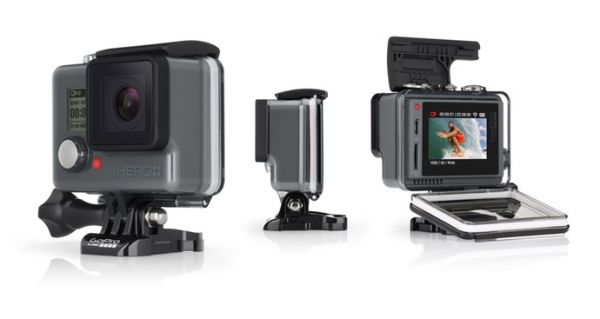 Rugged and waterproof to 131’ (40m), HERO+ LCD also includes advanced features like HiLight Tagging and in-camera video trimming to make it easier to identify and share your favorite moments. HiLight Tagging lets you mark key moments while recording and during playback so you can easily find them later, and the all-new video trimming feature allows you to create short clips in-camera for easier sharing without a computer.

Built-in Wi-Fi and Bluetooth® connect the HERO+ LCD to your GoPro App-enabled smartphone or tablet for easy camera control and shot preview when your camera is mounted or out of reach. The GoPro App also allows for easy content sharing to Instagram, Facebook, Twitter and more and combines with the new in-camera video trimming feature to form a convenient content sharing solution.

“HERO+ LCD illustrates that even as we push the limits of life capture with bleeding-edge devices like the HERO4 Black, we’re also focused on delivering accessible, high-quality capture solutions to anyone wanting to GoPro,” said Nick Woodman, founder and CEO of GoPro.

Whether you are a first-time user or a GoPro veteran, the HERO+ LCD is an impressive capture solution. It combines GoPro’s famed image quality, versatility and durability with WiFi connectivity, long battery life and touch display convenience in an all-in-one design.

The GoPro HERO+ LCD will be available for purchase in the U.S. at authorized GoPro retailers and GoPro.com beginning June 7, 2015 for $299.99 MSRP. International availability will begin July 12.

GoPro, Inc. is transforming the way people capture and share their lives. What began as an idea to help athletes self-document themselves engaged in their sport has become a widely adopted solution for people to capture themselves engaged in their interests, whatever they may be. From extreme to mainstream, professional to consumer, GoPro enables the world to capture and share its passion. And in turn, the world has helped GoPro become one of the most exciting and aspirational companies of our time. For more information, visit www.gopro.com

GOPRO® and HERO® are registered trademarks of GoPro Inc. in the United States and other countries.