WAYNE, NJ (Dec. 14, 2015) – JVC Professional Video, a division of JVCKENWOOD USA Corporation, will introduce the GY-HM200SP 4KCAM camcorder with embedded score panel graphics next week at the 2015 SVG Summit in New York City. Designed to enhance single-camera local sports coverage, the camera produces a real-time score overlay on recorded or streamed video output without the use of an external CG and production switcher.

The GY-HM200SP can receive score information directly from a mobile device connected wirelessly to the camera using an intuitive GUI. It will also be possible for the camera to interface directly to the sports venue’s own scoreboard controller through a wired or wireless interface. The camera includes basic layouts to cover a wide variety of sports, but JVC will also be able to customize the overlay with the names and logos of teams. 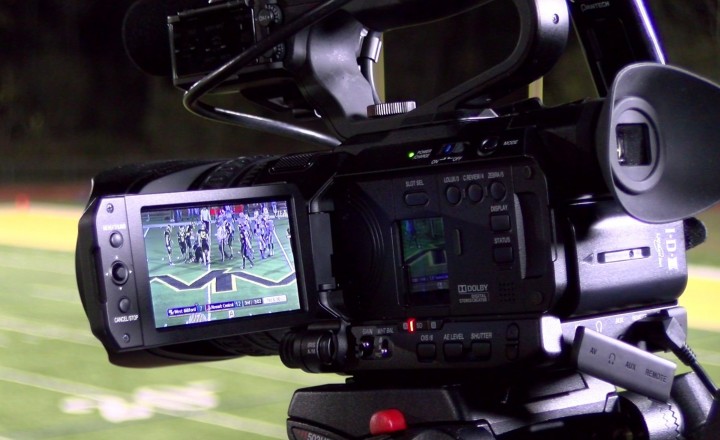 “Not every school has access to a multi-camera mobile production system with a dedicated CG for covering all their sporting events,” explained Ian Scott, vice president, Professional Video Division. “The new GY-HM200SP makes it easy for one person to shoot the game, insert graphics, record, and stream the production live – all directly from the camera. For schools with limited equipment and personnel resources, this new camera provides an innovative and affordable solution for producing professional-quality, single-camera sports coverage.”

Users can add up to 50 .JPG or .PNG graphics via an SD card and store them in the camera. Graphics can be advanced manually or presented as a slideshow. A graphics loop is activated using the camera’s web interface, with slideshow timing allowing up to 99 seconds per graphic (0 = manual advance) set by the user.

With the new full-screen graphics, GY-HM200SP users can create slideshows that present advertising during halftime or other extended breaks in the action. For worship applications, graphics can display scripture readings or lyrics, with the operator manually advancing graphics as the service progresses.

Graphics can be produced with PowerPoint or any photo editing software and saved as a series of .PNG files with alpha (transparency) channel, which provides the most flexibility for creating overlays. For example, full-screen graphics can be used concurrently with the GY-HM200SP’s score panel graphics, allowing advertising or promotional banners to be placed on the screen throughout a game. Full-screen graphics are saved at 960×540 and upscaled to 1920×1080.