27 Aug 2015 — MAGIX is proud to announce the release of the latest version of its video editing solution, Movie Edit Pro 2016. This powerful program boasts a multitude of unique features, ranging from H.265 support and high-quality image stabilization to working with footage from 360° cameras and action cams, giving film hobbyists something to really get excited about.

Among the many improvements, MAGIX has specifically focused on optimizing the way users work with Movie Edit Pro. This is why the program is the first consumer video editing solution to support the HEVC/H.265 compression standard with Intel codec technology. Hardware-accelerated decoding allows H.264 videos to be decoded by the graphics card, thus freeing up the processor and greatly improving performance while editing 4K/UHD material.

The Movie Edit Pro product family offers beginners and more advanced users a range of practical tools which allow videos to be edited down to the smallest detail.

In addition to comprehensive image stabilization, users can choose from over 200 new, modern title templates to add titles and text that perfectly fit the style of their video.

Movie Edit Pro 2016 Plus comes with a range of innovative and intuitive features, including 360° editing, comprehensive action cam support, beat-based video editing and much more.

Movie Edit Pro 2016 Plus is the first video editing program to feature 360° video editing for panorama footage. The new 360° support allows users to import material from modern cameras, such as the RICOH Theta, select the sections they want to use and add them to their video.

Keeping music and picture in perfect sync is easy with the beat-based editing feature in Movie Edit Pro 2016 Plus. Users can set cut points in their own music via touchscreen or mouse and can even have these automatically set to match the beat of the music.

Movie Edit Pro 2016 Premium combines all the new features of the Plus version with a unique selection of features from top effects packages. 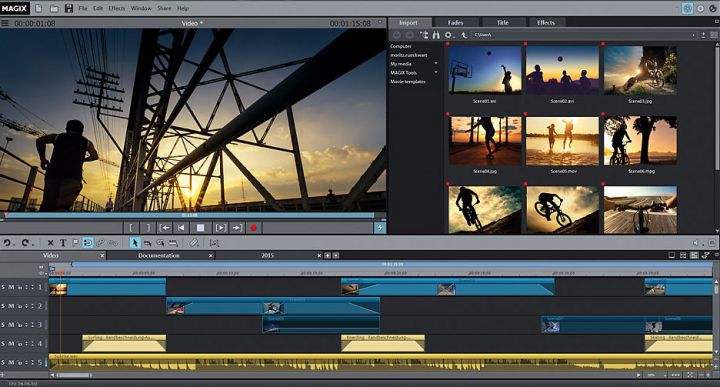 Demanding action cam users can also take advantage of the NewBlue ActionCam Package, which offers a wide range of special effects for creating impressive action videos. Users can turn digital videos into old-looking movies with the Bleach Bypass effect and bring color and picture to life with auto contrast, hue adjustment and RGB color shift. A selection of presets for lens correction are also available, which can be implemented to make quick and easy changes to zoom, concavity, convexity and focus.

The most important features:

Contains all the features of Movie Edit Pro 2016 and more:

Contains all the features of Movie Edit Pro 2016 Plus and more: