27 Mar. 2015 — Burbank, CA. — Matthews Studio Equipment is pleased to introduce the KerriKart at NAB 2015. This unique cart, designed by Montreal-based Director of Photography Bill Kerrigan, incorporates the traditional cart support with a capacity to add a slider to the package.

“I’d been using the same industry standard equipment dolly for many years, but when I added a slider to my kit, I needed a second cart to transport two sizes of C-stands, sand bags and slider equipment,” explains Kerrigan. “I wanted something simpler, which required less gear and just one cart. The answer was to design a dolly, which would combine a cart and slider together.” 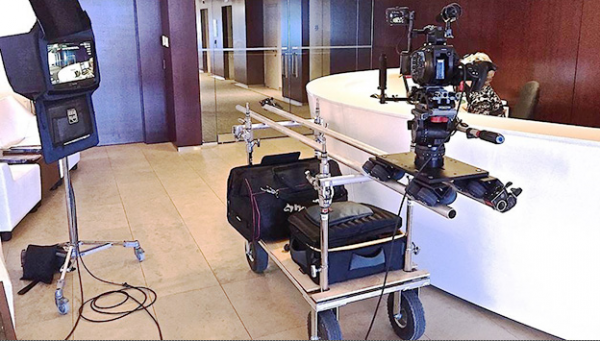 This new cart fits MSE’s high-quality standards and more. “When Bill brought us his cart design, we were excited to become involved with this new product,” says Robert Kulesh, Vice President of Sales and Marketing for MSE. “As with all of MSE equipment, the KerriKart is strong, tough and durable but it is also light enough for one person to lift. It breaks down and sets up in less than five minutes. Due to the pneumatic tires, it is easily maneuverable and takes on all kinds of rough terrain and natural elements with ease.”

It’s the addition of slider capabilities that makes the KerriKart stand out. Rails/shelf can be used from ground level to over 6 feet, accommodates 2 speed rails for a slider dolly, and gives the user a stable base for sliding – eliminating the transport of C-stands and sand bags. It will also accommodate any size camera and lens.

“The versatility of set up sold us as well,” adds Kulesh. “It is customizable to the user’s needs and configurations. Not only can it accommodate 4-foot, 6-foot and 8-foot speed rails, the top shelf and rails can be attached at almost any height and the shelf will fit on either the top or bottom of the cart. Included are extras like 4 riser pins to hold a monitor, a soft light, and a sound boom. Many of the parts needed are already in the end-user’s personal equipment packages, and whatever else is needed can be supplemented through Matthews’ off-the-shelf grip stock.

“Bill Kerrigan’s KerriKart is extremely user friendly and built with knowledge and needs garnered from over 30 years of experience as a television, documentary, commercial and corporate video shooter who has worked in over 40 countries around the world. It is what we at MSE strive – a product built from a solid background in knowing what is needed to make shots faster, safer and more creative.”

The KerriKart along with several other new support from MSE, including FLOATCAM’s Pan/Tilt Head and the new VATOR III series can be seen at NAB Booth #5437 Central Hall.

Matthews Studio Equipment is a 45-year-old manufacturer of industry-specialized hardware, camera and lighting support. Its equipment is being used on entertainment productions and in major studios in over 90 countries around the world. The company has been honored with the Presidential “E” Award for outstanding contributions to growing U.S. exports, strengthening the economy and creating American jobs. Matthews has been honored by the Academy of Motion Picture Arts and Sciences and the Academy of Television Arts and Sciences for Technical Achievement. MSE is the exclusive distributor of the FLOATCAM and POLLY DOLLY products throughout Asia and the Americas. MSE recently moved into a new state-of-the-art facility at 4520 West Valerio Street, Burbank, CA 91505.