Version 4.0 provides 4:2:2 (8-bit) 4K recording at 24/25/30p onboard to SDXC media cards. In addition, IP remote function will now allow remote control and image viewing in 4K. When using 4K 4:2:2 recording mode, the video output from the HDMI/SDI terminals is HD. The Version 4.0 firmware upgrade is free of charge for all current GY-LS300CH owners and will be available in late May.

The GY-LS300CH will also now have the capability to output Ultra HD at 60/50p via its HDMI 2.0b port. Through JVC’s partnership with Atomos, the GY-LS300CH will operate seamlessly with the new Ninja Inferno and Shogun Inferno monitor recorders, triggering recording from the camera’s start/stop operation. Plus, when the camera is set to J-Log1 gamma recording mode, the Atomos units will record the HDR footage and display it on their integrated, seven-inch monitors. 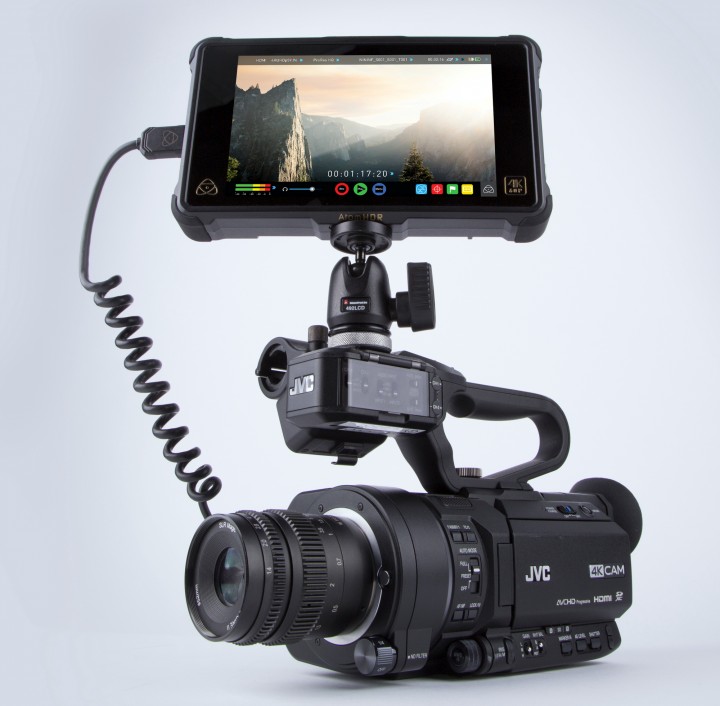 “The upgrades included in our Version 4.0 firmware provide performance enhancements for high raster recording and IP remote capability in 4K, adding even more content creation flexibility to the GY-LS300CH,” said Craig Yanagi, product marketing manager, JVCKENWOOD. “Seamless integration with the new Ninja Inferno will help deliver 60p to our customers and allow them to produce outstanding footage for a variety of 4K and UHD productions.”

JVC and Atomos will also collaborate on a special promotion when the GY-LS300CH and Ninja Inferno are purchased together at participating resellers.

Designed for cinematographers, documentarians, and broadcast production departments, the GY-LS300CH features JVC’s 4K Super 35 CMOS sensor and an industry standard Micro Four Thirds (MFT) lens mount. With its unique Variable Scan Mapping technology, the GY-LS300CH adjusts the sensor to provide native support of MFT, PL, EF, and other lenses, which connect to the camera via third-party adapters. Other features include Prime Zoom, which allows shooters using fixed-focal (prime) lenses to zoom in and out without loss of resolution or depth, and a built-in HD streaming engine with Wi-Fi and 4G LTE connectivity for live HD transmission directly to hardware decoders as well as JVCVIDEOCLOUD, Facebook Live, and other CDNs.