Osaka, Japan — Panasonic today announced that it has developed a new Digital Single Lens Mirrorless (DSLM) Camera LUMIX GH5 that is capable of recording smooth, high-precision 4K 60p/50p and faithful 4:2:2 10-bit 4K video*3 for the first time in the world*1. It also features ‘6K PHOTO’*2 which extracts approx.18-megapixel still images from ultra high-quality video with approx. 9 times the pixel count of Full-HD. The new LUMIX GH5 is scheduled for commercialization and introduction to the global market in early 2017.

Panasonic has been committed to the development of innovative digital cameras under the theme “Create a new photo culture in the digital era.” The world’s first Digital Single Lens Mirrorless camera DMC-G1 was introduced in 2008*4 and the subsequent DMC-GH1 achieved the world’s first Full HD video recording in 2009*5.

In 2014, Panasonic introduced the DMC-GH4, which realized 4K 30p/25p video recording for the first time in the industry*6. At the same time, Panasonic proposed a new and unique method of photography called ‘4K PHOTO’ which allows users to capture fleeting photographic moments that even the eyes cannot catch in 4K resolution at 30 fps to save as high-quality photos.
As a result, the DMC-GH4 is highly acclaimed for its exceptional performance in both photography and videography by a wide range of professional users worldwide – not only photographers but also cinematographers in the film production field, as well as emerging photo/video-hybrid creators.

By advancing Panasonic technologies, such as digital signal processing and heat dissipation, and packing them into the compact, lightweight body of a Digital Single Lens Mirrorless camera, the LUMIX GH5 enables 4K 60p/50p and 4:2:2 10-bit 4K video recording*3, which has never before been achieved *1. With this unprecedented video recording performance, Panasonic aims to further capitalize on the strength that it has achieved in the film production industry.

In the LUMIX GH5, the conventional ‘4K PHOTO’ function is dramatically advanced to form ‘6K PHOTO’*2 which lets the user cut a still image out of ultra high-quality 18-megapixel video with approx. 9 times the pixel count than Full-HD. Taking advantage of its high-speed, long-time burst shooting capability, spur-of-the-moment shots can be saved in beautiful photos with higher resolution that complies with larger-sized printing by substantially increasing the resolution from approx.8-megapixel (4K PHOTO) to approx.18-megapixel (6K PHOTO*2). Furthermore, approx.8-megapixel 4K PHOTO can be captured at 60 fps. 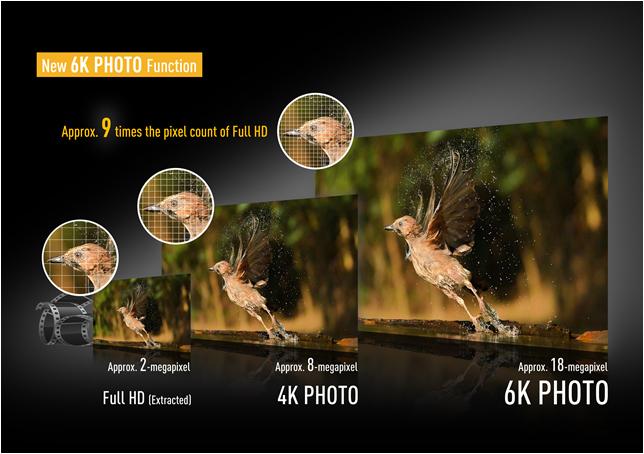 The LUMIX GH5 goes on show at Photokina 2016, which will be held at Koelnmesse, Germany, through 20-25 September in 2016, together with the new LEICA DG VARIO-ELMARIT F2.8-4.0 Lens Series. Achieving both high optical performance and a compact size, the LEICA DG VARIO-ELMARIT F2.8-4.0 Lens Series includes a new 12-60mm standard zoom lens, 8-18mm wide zoom lens and 50-200mm telephoto zoom lens that will be showcased as a reference exhibit at the Panasonic booth.

The latest information on LUMIX GH5 will be updated at the following web page: http://www.panasonic.com/global/consumer/lumix/gh5/

Panasonic Corporation is a worldwide leader in the development of diverse electronics technologies and solutions for customers in the consumer electronics, housing, automotive, enterprise solutions and device industries. Since its founding in 1918, the company has expanded globally and now operates 474 subsidiaries and 94 associated companies worldwide, recording consolidated net sales of 7.553 trillion yen for the year ended March 31, 2016. Committed to pursuing new value through innovation across divisional lines, the company uses its technologies to create a better life and a better world for its customers. To learn more about Panasonic:
http://www.panasonic.com/global.