The Digiface Dante mobile audio interface enables the transmission of up to 64 Dante channels and 64 MADI channels via a single USB 3.0 connection. The Digiface AVB mobile audio interface is based on the AVB standard (Audio Video Bridging) and enables the transmission of up to 256 network audio channels between a Windows computer and other AVB devices within an audio Gigabit network via a single USB 3.0 cable. 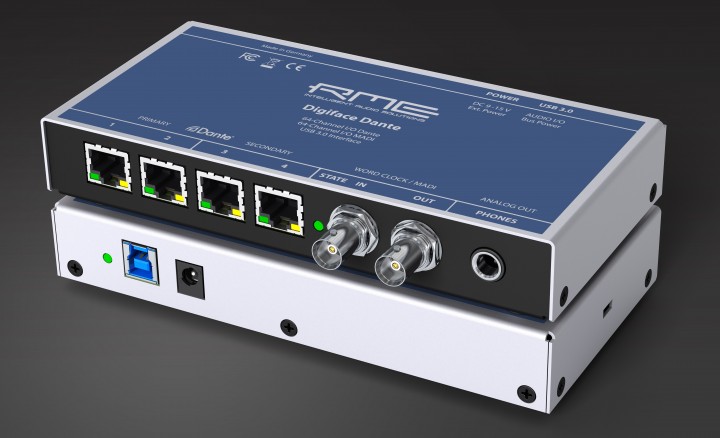 RME’s new Digiface Dante extends its Digiface series with a powerful Dante model for USB and standalone operation. The Dante Audio-over-IP protocol was developed by the Australian company Audinate and enables uncompressed transmission of digital audio signals with low latency over long distances. To support the growing popularity and distribution of Dante-based solutions in the professional audio market, the compact Digiface Dante USB 3.0/Dante interface from RME adds an external option for fully mobile operation to the previously available internal Dante PCIe card. To power the Digiface Dante in the field, users can use both an external power supply and USB bus power.

With the integration of the MADI drivers (Mac/Windows) from the renowned RME MADIface series, Digiface Dante allows users to transfer up to 64 MADI channels via USB 3.0 in addition to up to 64 Dante channels. For this purpose, both BNC sockets for the word clock I/O can be switched to MADI I/O. The total of 128 Dante and MADI channels can be conveniently controlled via the included Dante control software and the DSP-based RME TotalMix FX mixer with its comprehensive routing and monitoring options. TotalMix FX allows users to create independent sub-mixes according to the number of available outputs.

The Digiface Dante has two banks of redundant network ports that can be used multifunctionally as inputs and outputs, as network switches and for redundant operation with primary and secondary networks in case of increased security requirements. In addition, the interface can also be used as a mobile 64-channel Dante/MADI converter if the USB computer connection is not in use.

In addition to the USB 3.0 port, Dante network ports, word clock I/O ports and power supply connector, the Digiface Dante also has a high-quality headphone monitor output that can be used as a line output to transmit an optional analog stereo mixdown.

The Future of Audio Networks

With the Digiface AVB, RME is focusing on the future of audio network technology. The mobile audio interface with USB bus power operation uses the open IEEE 802.1 protocol as part of the AVB standard of the Audio/Video Bridging Task Group and enables synchronized and prioritized streaming of audio data over a gigabit network. The integrated USB 3.0 connection allows up to 128 audio channels to be streamed back to the AVB network and another 128 channels to the computer — with sampling rates of up to 192 kHz. Users can adjust the channel sizes of streams between 2 and 32 channels as needed to ensure maximum compatibility with AVB audio devices available on the market. 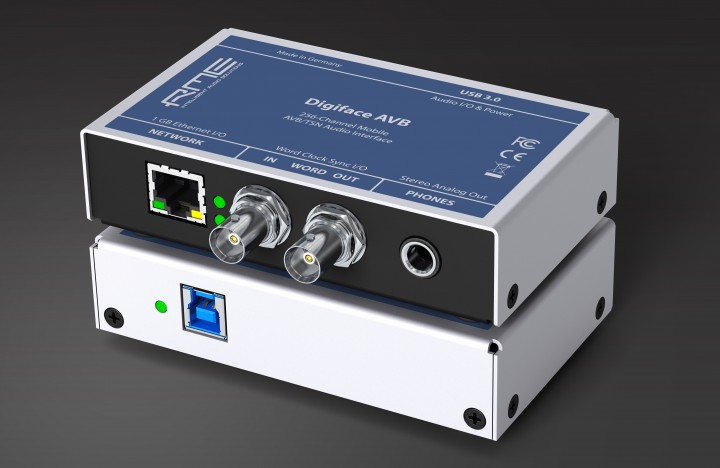 In addition to the Gigabit Ethernet connection and USB 3.0 port, the RME Digiface AVB features word clock I/O and a headphone output for flexible, high-quality monitoring of the transmission signals. The package also includes the DSP-based TotalMix FX mixer with its comprehensive routing and monitoring options as well as an AVDECC controller. The controller enables detection of all AVB devices within a network and allows users to manage and monitor incoming and outgoing streams.

With the new Digiface AVB, Digiface Dante and the exisiting Digiface USB and MADIface USB, RME users now have a comprehensive selection of digital interfaces (MADI, ADAT, DANTE, AVB, AES via USB 2.0/3.0) for a wide range of applications. While the Digiface USB and MADIface USB based on the RME USB 2.0 driver can easily transfer up to 70 input and output channels, the new Digiface AVB and Digiface Dante with USB 3.0 are designed for users with even higher channel requirements.