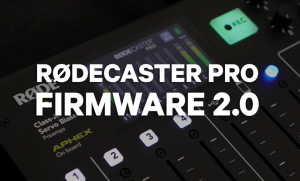 SYDNEY, AUSTRALIA: Tuesday, August 27th, 2019 — The next major firmware update for the RØDECaster Pro is here! RØDE Microphones is thrilled to announce firmware version 2.0 – a new update that introduces over 25 powerful features to the RØDECaster Pro.

Version 2.0 follows on from updates earlier in the year, which introduced multitrack recording to the RØDECaster Pro amongst other handy features. Consolidating months of user feedback and testing, the new firmware will make it even easier for users to create incredible sounding podcasts.

For a more in-depth rundown of the new features introduced in the firmware, head to the RØDE blog or check out the video below.

Download version 2.0 now from rode.com/rodecasterapp and get podcasting today.

About RØDE Microphones and The Freedman Group

RØDE Microphones designs and manufactures high-quality microphones, interfaces and related accessories for studio, live and location use. Its products are designed and primarily manufactured in Sydney, Australia and exported to over 117 countries globally. RØDE is part of The Freedman Group, with APHEX, Event and SoundField. Freedman Electronics celebrated its 50th anniversary in 2017.