Amsterdam, September 14, 2016 – High-quality 3D audio that eliminates the boundaries between playback and reality – this is the promise of the AMBEO VR MIC that was showcased by Sennheiser at the IBC. Up until now, VR productions had to record immersive audio with quite complicated microphone set-ups. The AMBEO VR Mic puts everything into a compact and easy-to-use handheld – making it an ideal tool for any professional VR production. The microphone will become commercially available in November 2016.

“The demand for compact microphones that capture spatial audio to match visual 3D experiences has increased enormously in the recent past. For the user to gain a truly immersive experience, however, it is imperative that the sound within VR is also 3D,” said Kai Lange, product manager, Broadcast and Media. “The AMBEO VR microphone has been designed specifically for VR/AR purposes and enables VR content producers to capture the natural, immersive environment, providing a realistic and immersive experience for the user.”

The AMBEO VR Mic is an Ambisonics microphone that uses four carefully selected, matched capsules in a tetrahedral arrangement. It is fully balanced and powered by 4x 48 volts phantom powering.

The handheld microphone comes complete with a split cable with four color-coded and labelled XLR connectors according to the capsule position, a Rycote suspension mount and a foam windshield.

Also included is the necessary encoding software that translates the A format file generated from the recording of the four microphone channels into a B format file W, X, Y and Z. This format is recognised in the Ambisonics world, the W component being the omni and the X, Y, Z components being figure-of-eight capsules along three spatial axes. The A to B format encoder will be available in VST, AAX and AU plug-ins for the customer’s preferred digital audio workstation, and as a stand-alone version for Mac or Windows.

“To ensure that the AMBEO VR Mic is ‘right on target’ with what the AR/VR community needs, the entire development process was accompanied by intensive field testing with VR content producers,” explained Kai Lange. “In fact, we have just concluded an extensive creators’ program with participants from across the international VR audio/video industry, who put the microphone through its paces.” 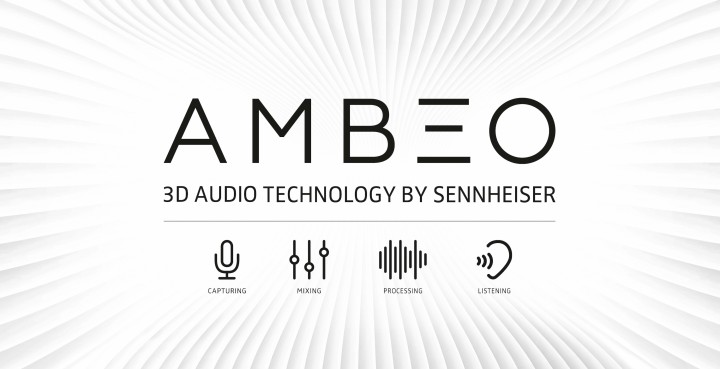 AMBEO is Sennheiser’s program and trademark for 3D audio

AMBEO is Sennheiser’s program and trademark for truly immersive 3D audio, designed to create sound experiences with an incredibly high emotional impact. The program will cover products and technologies for the entire audio signal chain, from capture to mixing and processing to reproduction. AMBEO operates with a height elevation that gives audio back its natural three-dimensional character, creating a totally new experience that is set to change music and sound forever. AMBEO products are consistently developed with an early involvement of users, producers, content providers and technology partners across the globe, creating tools that not only match their demands but also shape the future of audio.

Audio specialist Sennheiser based in Wedemark near Hanover is one the world’s leading producers of headphones, microphones and wireless transmission technology with its own plants in Germany, Ireland and the US. Sennheiser operates in more than 50 countries. Together with 19 subsidiaries and long-standing trading partners, the company sells innovative products and future-oriented audio solutions which are optimally tailored to customers’ needs. This enthusiasm for audio technology is shared by some 2,750 employees worldwide who work for the family-run company, which was established in 1945. Daniel Sennheiser and Dr. Andreas Sennheiser took the helm in 2013 and are the third generation to manage the company. In 2015, the Sennheiser Group‘s turnover totaled €682 million. www.sennheiser.com