Las Vegas, April 18, 2016 – At NAB, audio specialist Sennheiser [Booth N5729] is unveiling the MKE 440, a stereo camera microphone that solves a typical challenge encountered by DSLR users: capturing focused stereo sound from the filmed object. “The MKE 440 is not only the most compact stereo shotgun microphone on the market,” said Kai Lange, Sennheiser product manager, Broadcast and Media. “Quite unlike other stereo camera microphones, it will predominantly pick up the sound from within the camera angle thanks to its new stereo principle.” The result is a well-balanced mix between ambient sound and clearly comprehensible speech and dialogue. “This enables DSLR users to capture professional stereo sound in one go, which saves production time and effort,” added Kai Lange. 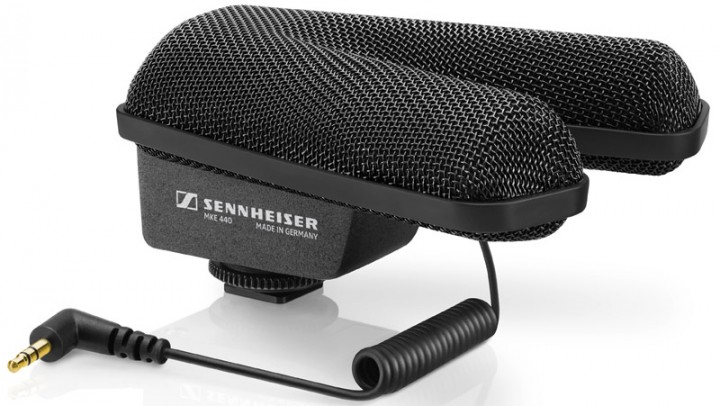 DSLR filmmakers have always had a hard time getting good sound from their camera-mounted stereo microphone. The new MKE 440 achieves this task: Thanks to two mini-shotgun microphones and a new stereo technique, it records the sound from within the camera angle, beating any mini AB, MS or XY arrangements. While these classic stereo set-ups also capture sound and noises from the sides – including any comments from the camera operator or people next to them – the two mini-shotguns of the MKE 440 are mounted in a V-shape arrangement that predominantly picks up the sound from within the direction of filming and rejects the majority of off-axis noise from outside the camera focus.

The matched mini-shotguns of the MKE 440 feature super-cardioid pick-up patterns that overlap to create a front focus. “The result is what I would call picture-matched stereo ambience,” said Kai Lange. “For example, this lets filmmakers capture comprehensible dialogue with just enough ambient sound to preserve the atmosphere of a scene.” 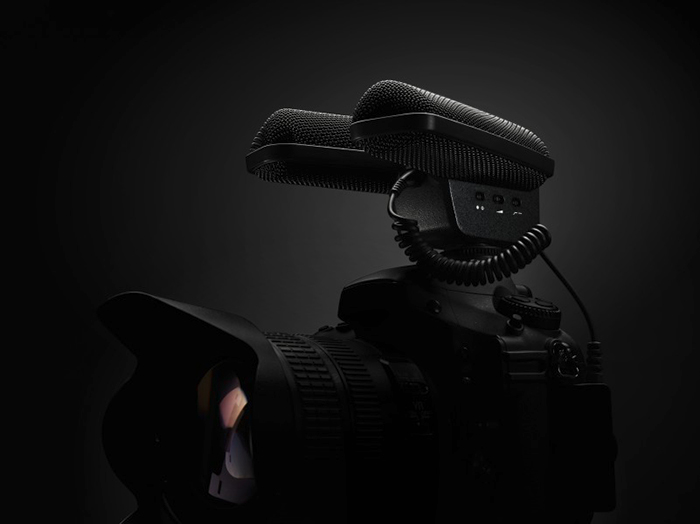 The microphones are shock-mounted internally to reduce any handling noise and are protected against wind noise by a stainless steel micro-mesh. For strong wind, a special hairy cover is available as an accessory.

The compact, all-metal MKE 440 attaches to standard camera shoe mounts. It features a three-level sensitivity switch to adjust to softer and louder sound sources and has a switchable low-cut filter to eliminate low-frequency noise such as wind noise. The microphone is powered by two AAA size batteries, with the green LED of the on/off switch doubling as a low-batt indicator. The LED will turn red approximately four hours before the batteries run flat, ensuring sufficient time to finish shooting.

Visit Sennheiser and Neumann at NAB, Booth No. N5729

Caption:
Image 1 and 2 (MKE 440): The MKE 440 is an extremely compact stereo DSLR microphone that enables filmmakers to capture comprehensible dialogue with enough ambient sound to preserve the atmosphere of a scene.

Audio specialist Sennheiser is one of the world’s leading manufacturers of headphones, microphones and wireless transmission systems. Based in Wedemark near Hanover, Germany, Sennheiser operates its own production facilities in Germany, Ireland and the USA and is active in more than 50 countries. With 19 sales subsidiaries and long-established trading partners, the company supplies innovative products and cutting-edge audio solutions that are optimally tailored to its customers’ needs. Sennheiser is a family-owned company that was founded in 1945 and which today has 2,700 employees around the world that share a passion for audio technology. In 2014, the Sennheiser Group had sales totalling €635 million. www.sennheiser.com