My test started out to see if I could replicate the underlying look and color space from the ‘CineEI Mode’ in the ‘Custom Mode’ on the Sony F55 camera. There are several reasons why this might be desired and in this article I will explain some of them along with what lead me down the path to this test.

Many F5 and F55 camera owners, including myself, have felt a continuous struggle and imbalance between the CineEI mode and Custom Mode. With Sony’s ongoing development of firmware updates for these cameras and the fact they are continually seeking feedback on them, let’s just say there has been no shortage of suggestions to Sony on where there is room for improvement. 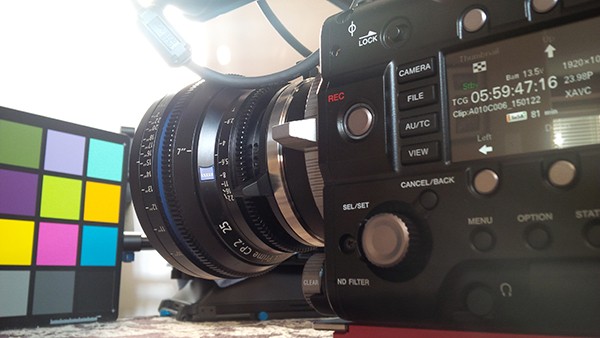 CineEI Mode on the Sony F5 and F55 cameras disables most of the camera’s internal image processing, leaving the most unadulterated image possible from the sensor with the full intention of going through a post production workflow where later color temperature, exposure, and other aspects of the image can be manipulated. This type of workflow is very suitable for cinema and other high-end productions where there are plans (and the budget) for a complete post production workflow lifecycle.

Prior to firmware version 3.0, CineEI Mode was only available in the RAW recording mode. Version 3.0 not only made it possible to use the CineEI mode for internal recording to Sony SR or XAVC formats, but it also brought the ability to use in-camera user 1D LUTs or Sony Look Profiles for on-set monitoring. Later firmware version 4.0 brought the ability to load custom 3D LUTs in camera. The ability to use LUTs in-camera are especially useful when working in the S-Log gamma mode and you want a more friendly preview on-set for producers, directors or crew of what the final image might look like after grading.

When working in a Sony RAW based workflow you generally select the color space and gamma curve in post but now that Sony had opened CineEI Mode for internal recording they’ve made available three color space and gamma curve combination presets, one of which must be selected and is baked into the internal recording. As of firmware version 4.1 the following color space options are available internally in CineEI mode on both F5 and F55 cameras: S-Gamut/SLog2 and S-Gamut3.Cine/SLog3 and S-Gamut3/SLog3.

S-Gamut3 is the very wide native color space of the camera (wider than REC-2020) and is much more involved to grade. Sony recommends S-Gamut3.Cine color space for more natural color reproduction with minimal grading required compared to S-Gamut3. If you chose to record using S-Gamut3 Sony has released a color space conversion LUT to convert S-Gamut3 to S-Gamut3.Cine. Using it is not mandatory if you record with S-Gamut3 but for less experience colorists it will make it easier to start grading the footage.

A feature of CineEI Mode worth mentioning is you can bake in a LUT or Sony Look Profile which personally I find great for certain projects that require fast turn around of footage where it will go straight to an editor or to air with only some minor tweaking required. I really like the Sony LC-709TypeA LUT for a closer to “Alexa look” and more importantly so do my clients!

Overall there is no doubt CineEI Mode is absolutely fantastic! It packs a lot of functionality outside of Custom Mode plus gives us access to new color spaces which most would agree makes it far easier and faster to produce great looking images from the camera.However since CineEI mode has become more widely adapted for internal recording, for those working in non-RAW or non post heavy workflows it does leave a few things left to be desired. For example you can not white balance or dial in a specific color temperature in CineEI Mode. Instead you must select from one of the three color temperature presets; 3200k, 4300k and 5500k. Also in CineEI mode the ISO becomes locked to the camera’s native ISO (1250 ISO for the F55 and 2000 ISO for the F5) so if you want a different ISO that gain must be applied in post.

If working in mixed lighting situations or you just want to warm up or cool down your image it would be nice to have the ability to set your color temperature for monitoring or even baking into your footage. The same goes for setting your ISO. Sometimes it would be handy to set the gain internally via ISO so it does not have to be done in post. Some would argue to simply use the Custom Mode except there are no monitoring LUTs in Custom Mode and the newer S-Gamut3 and S-Gamut3.Cine color spaces are not available in Custom Mode either. In a typical non-RAW workflow I would like to be able to record internally using SLog3 gamma in S-Gamut3.Cine color space, set my ISO, perform a white balance (or dial in my color temperature) and lastly enable a custom loaded or stock Sony 3D LUT in-camera for on-set viewing. What one mode offers it takes away from the other and vice versa! So the basis for my test was to see if I could disable certain base settings from the Custom Mode and end up with the same underlying look and color space as CineEI mode to at least solve a few of my problems.

Buried deep within the PAINT Menu are Matrix Presets which can only be accessed in Custom Mode. These presets aren’t LUTs in the traditional sense, but these presets will transform the native color from the camera into color space standards found on the list.

Here is a list of the Matrix Presets on the F55… 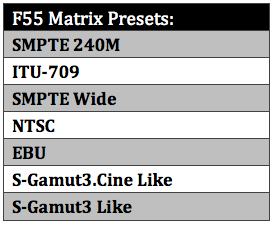 The last two presets on the F55 Matrix Presets list (S-Gamut3.Cine Like and S-Gamut3 Like) are the ones I decided test against the same color spaces from the CineEI mode.For my tests I used a X-Rite ColorChecker lit by a large soft even light source and set exposure on my F55 for middle grey. I used a Zeiss CP.2 25mm PL mount lens and the ISO was always set to 1250 ISO no matter which mode I was in. I then shot the following comparisons:

Here are some extracted frame grabs from the shots un-graded:

below: Custom mode, SLog2 matrix off 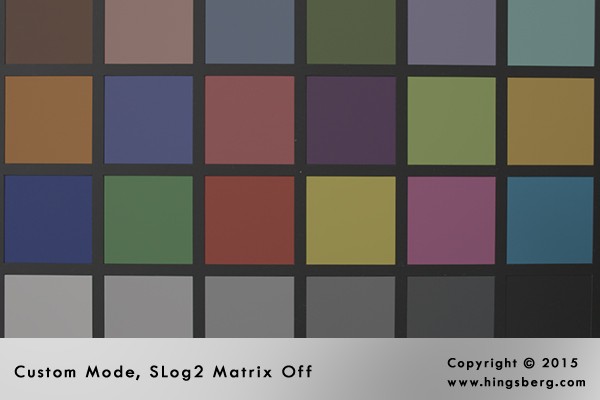 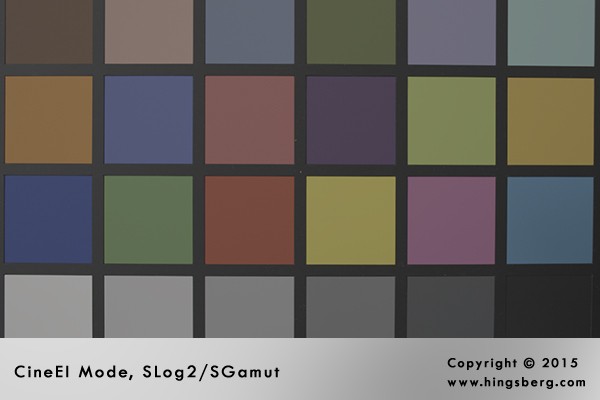 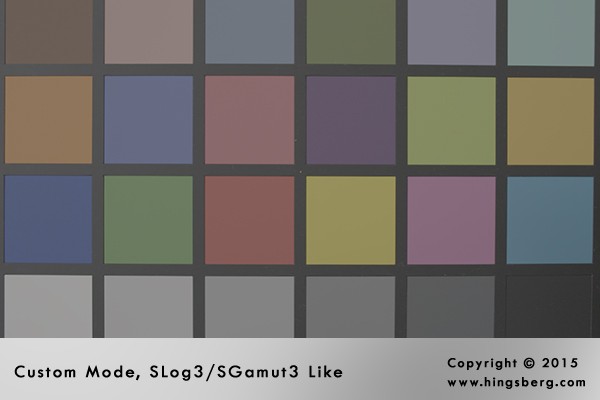 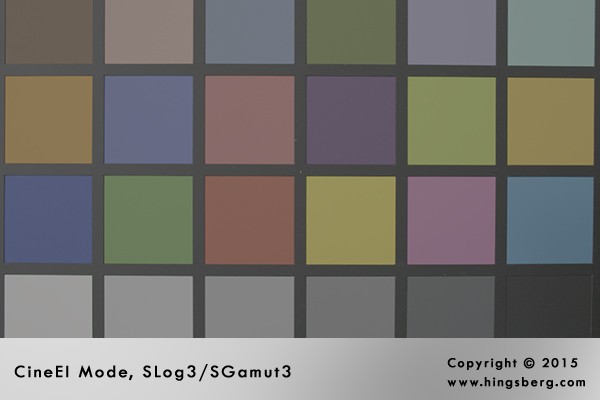 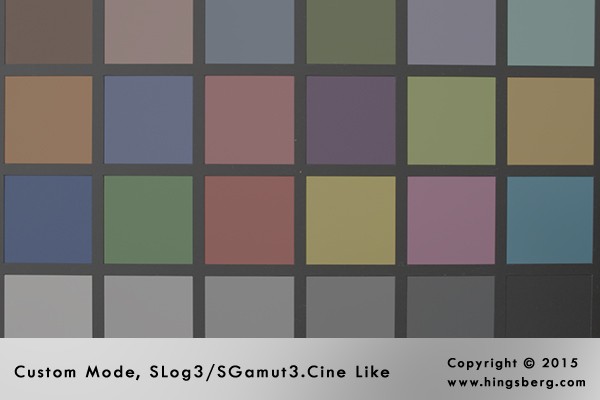 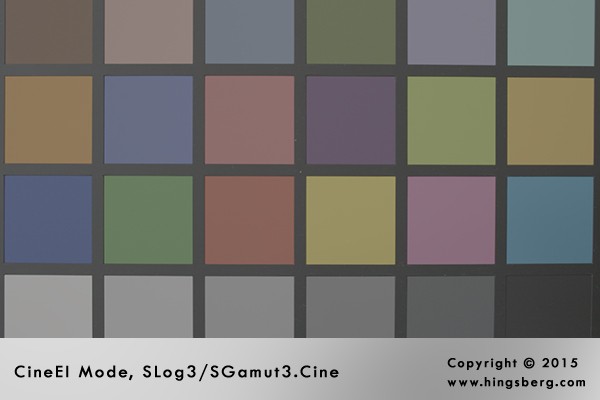 On the SLog3 and S-Gamut3 combination tests the colors between Custom Mode and CineEI mode seem to match very closely. On my OLED viewfinder when playing back footage from the various shots I could see a very subtle shift on only a few of the swatches from the color chart and overall the colors seemed to match up very well. Checking the charts on a vectorscope however the differences were a little more obvious. The colors and saturation levels are not 100% identical, but they are considerably close.

One consideration about this test is that the color chart I used would not really exhibit any color that would make use of the extended color gamut capability of the camera. Coming up in Part Two of my testing, I plan to shoot some scenes that will hopefully make more use of the extended gamut, and then I will run the same series of color comparisons between camera modes.

A few things worth noting is that by using the Matrix Presets it is actually possible to combine S-Gamut3 or S-Gamut3.Cine with SLog2 which isn’t even possible in CineEI mode. Also the F5 camera has a completely different list of Matrix Presets so it would not be possible the get the CineEI color spaces in Custom Mode on the F5 unfortunately.

In closing here’s a brief table summarizing the features and SLog gamma / color gamut combinations are possible between two modes on the PMW-F55 camera:

Dennis Hingsberg is a freelance Director of Photography, consultant, and owner/operator of the Sony F55 camera based out of Toronto experienced working on the 35mm digital video format since 2003. Dennis is also the author of the ‘Ultimate Exposure Guide for Sony F5/F55’ which unravels various exposure methods for S-Log gamma curves, standard and hyper gammas and the Sony RAW format. The guidebook also offers an in-depth look at CineEI mode, LUT/Looks, and working with Light Meters. It's available from www.hingsberg.com.