Only one piece has been missing from this puzzle: the 12mm. Veydra showed a prototype 12mm in a private suite at NAB 2015, and then sent it to me for evaluation. 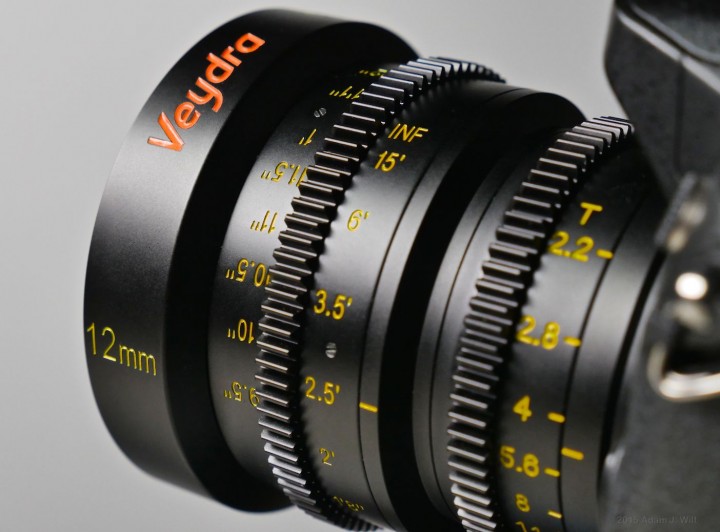 The 12mm looks very much like the other Veydra primes, though this particular prototype is 4mm shorter than my four production Veydras, and its markings are somewhat smaller. The prototype also lacks the chromed grooves on the leading and trailing edges of the focus ring.

Veydra supremo Ryan Avery warned me that this sample, like previous prototypes, is a bit rough around the edges, but it seemed perfectly fine: both focus and iris turned very smoothly, with no stiffness or grinding. 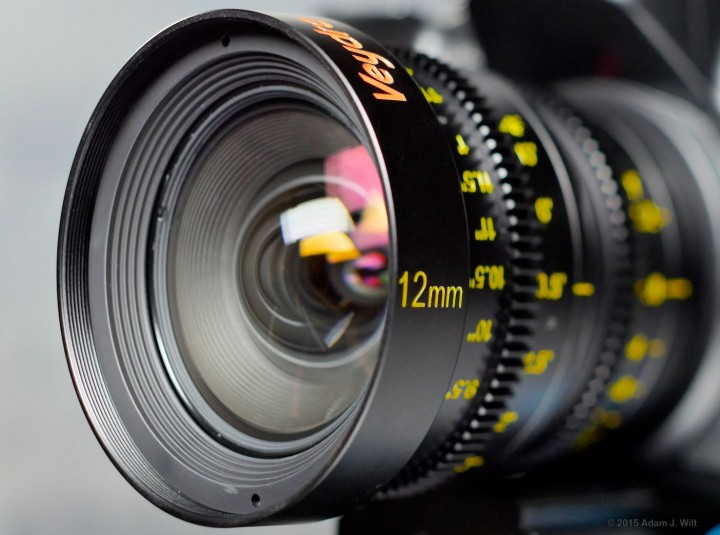 The 12mm has a rather large, convex front element. 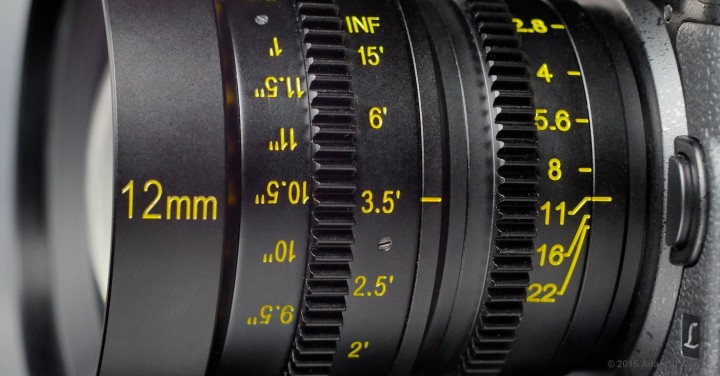 Apertures below T11 get rather crowded, but you probably don’t want to close that far down anyway due to diffraction losses.

So how does it perform?

First, remember that this is a prototype, not a finished lens (those should start shipping in June). Finished lenses should perform this well, or better. If the previous run of prototypes is any guide, this prototype’s performance will be close to that of the production lenses.

Short answer: If you widened the 16mm out a bit, you’d have the 12mm. The 12mm holds few surprises; its performance is consistent with its longer siblings, with only the minor differences that one expects with a wide-angle lens.

Sharpness: The lens is slightly softer than its siblings wide-open, but as crisp as they come by T4, and T2.8 is only infinitesimally worse than T4. Here are pixel-for-pixel extractions from the GH4’s full-frame, 4608 x 3072 images of a DSC Labs MegaTrumpet chart:

Corners are somewhat softer than these images show, with a trace of lateral yellow/blue chromatic aberration. They clean up nicely by T4. Corner softness may be due more to focal-surface curvature than to anything else; I noticed that I had to refocus slightly to make the T2.2 corners as crisp as possible, but I didn’t shoot separate test pix with the corners focused; I’ll wait for a final, production lens before I go that far.

From T4 to T8 sharpness is unchanged; at smaller apertures diffraction effects increasingly blur the image (an unalterable artifact of small apertures on a 4K MFT sensor, not a lens design defect).

Rectilinearity: given the mild barrel distortion of the 16mm when compared to the distortion-free images of its longer companions, I was concerned about how the 12mm might perform. I was needlessly worried; the 12mm is only a touch worse than the 16mm. Neither one calls attention to itself unless you’re focusing on straight edges right at the edge of the frame.

The 12mm’s color is very close to that of the 16mm, both being a tad warmer than the other three primes.

In the three pix below, I white-balanced with the 25mm, then shot with 25mm, 16mm, and 12mm lenses using that white balance (the 35mm and 50mm, previously tested, show the same color rendering as the 25mm). The images show both color and distortion of the three lenses, though the 12mm is not quite centered on the image but is tilting down slightly—with a lens that wide, even the slightest change of camera angle shows up very quickly in the perspective of the image! 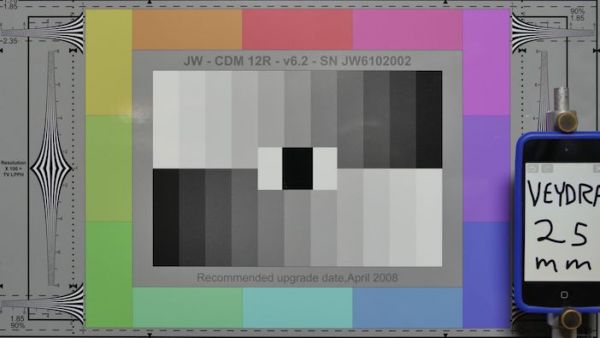 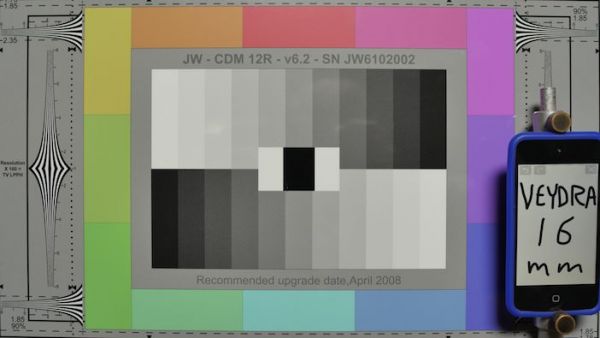 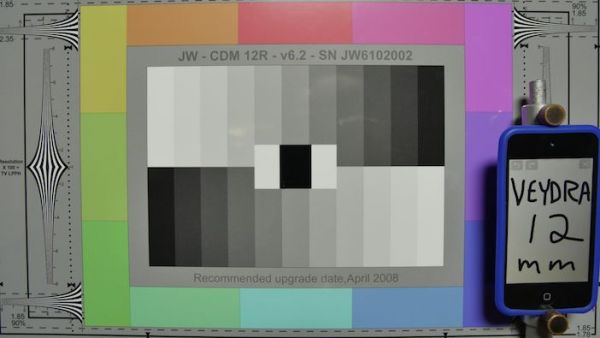 This 12mm prototype appears to be about 1/3 stop slower at any given T stop than my 16mm (I’ve seen a similar speed difference between two Arri Ultra Primes, too). Exposures track T-stops precisely from T2.2 to T11; T16 seems to be 1/3 stop darker than marked, and T22 is 1/3 stop darker still.

Evenness of illumination isn’t as dead-flat as on the other Veydras; corners are about 2/3 stop darker than the center wide-open. This subtle vignette moderates to about 1/3 stop by T4 and then remains constant down to T22. This is not unusual for a wide-angle lens, and even at T2.2 the corner darkening is so mild it’s undetectable unless you’re watching the waveform monitor.

Flare is comparable to other Veydras: a bit stronger than I might like (it’s about twice as strong as the flare on my Lumix 12-35mm, for example), but not so much so as to be problematic. The 12mm does show an interesting (and attractive) purple/blue flare when a light source is just out of the frame:

These images were shot on a GH4 in FHD (full-sensor) mode; that flare isn’t visible in 4K or ETC cropped frames, nor would I expect it to appear on the smaller sensor in the BMPCC.

Overall? This 12mm performs about as well as I would expect it to: comparable to its stablemates; slightly worse for sharpness when wide-open and in the corners; mild vignetting. These deficiencies are perfectly normal in wide-angle lenses when compared to “normal” or long focal lengths in the same family: wide lenses are simply harder to make.

Even so, I wouldn’t be displeased if the production 12mm lenses improve in these areas.

The 12mm looks like it’ll be a solid addition to the Veydra lineup, giving performances consistent with the other lenses in the set.

Disclosure: Ryan Avery at Veydra sent me the 12mm prototype to look at, but has not offered me any special deals or other inducements for a favorable review. This lens ships back to him later this week. I previously backed the Veydra Kickstarter project, and hope to receive my own 12mm in midsummer.