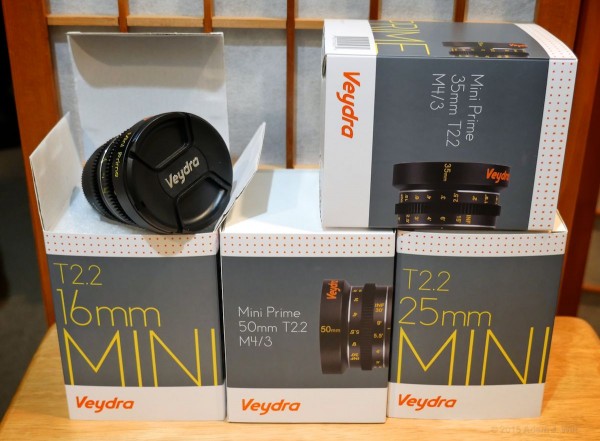 Four Veydras fresh off the boat

I previously wrote about the Veydra Kickstarter project, including a short Q&A with Veydra founder Ryan Avery, and reviewed a set of prototypes in December. The review was, of course, just a thinly-disguised excuse to get my mitts on the protos and see if they were any darned good, with an eye towards taking a chance on them. They were; and I did; and these are the result. With four production lenses in my hot sweaty hands, I can address some of the concerns and issues that came up when only prototypes were available.

Are they real? Many folks questioned the wisdom of backing a pricey Kickstarter project, since there’s no guarantee that anything Kickstarterish will ever ship. It’s a fair question, but in this case at least the answer is “yes”, the lenses are real.

Focus drag and mechanical consistency? The prototypes had fairly stiff focusing rings, and showed variability from lens to lens. Additionally, the protos were fairly rough-feeling in some spots, with some raspy grinding on a couple of the lenses as the rings were turned; a slight “clunk” in the 50mm when focusing direction was reversed; and  some looseness on the 16mm.

The production lenses I received have no grinding or rasping, just a buttery-smooth rotation from endstop to endstop for both focus and iris rings, and the lens bodies are solidly built with no wobble or looseness.

Focus and iris drag are, as in the prototypes, fairly high; a really fast focus pull can flex the camera and lens when they’re attached to the rails with just a single baseplate screw in the camera’s tripod socket. If you want to snap-focus with one of these puppies, I’d recommend a multi-point cage and/or a means of securing the lens front to the rails, so the torque from the follow-focus won’t flex the rig and wobble the shot.

There is a slight “clunk” sometimes when reversing focus direction with vigor, but only because the lens itself spins slightly on the camera’s MFT mount due to the aforementioned drag: that clunk is the sound of the rotating lens hitting its endstop in the mount.

Veiling flare? The production lenses are similar to the prototypes, with somewhat higher veiling flare than I’m used to seeing in other MFT lenses like the 12-35mm f/2.8 Lumix or the 25mm f/0.95 Voightlander, or the Arri/Zeiss Ultra Primes I’m most familiar with. It’s noticeable as a bright, shadow-lifting haze across the image when the sun is just out of frame, but a french flag or matte-box eyebrow easily takes care of it.

On the other hand, this flare (and the typical radial ghosting flare from in-frame light sources) is the most “character” you’ll get out of these lenses, as in every other way they’re boringly clean, crisp, and predictable.

Aperture calibration? I ran two sets of tests, aiming the lenses at a flat white surface. I set a marked aperture, then adjusted shutter speed until my GH4‘s histogram turned white, indicating a “proper” exposure. I repeated each test a few times.

In one test, I counted the 1/3-stop shutter steps needed to compensate for a change in the labeled stop (which should be 2/3 stop from T2.2 to T2.8, and a full stop for every other marked setting), and noted any discrepancies:

I should note that the aperture scales aren’t linear; they compress at the smaller apertures, so the iris is more sensitive to small changes in the iris ring position at small stops than at large stops. This makes my measurements at small apertures less precise; it also may affect the programming of third-party iris motors, if they assume linear scales.

In the second test, I recorded the “correct” shutter speed at each of three stops:

In other words, aperture calibration isn’t perfect, but it’s within 1/3 stop of its target value across all four lenses. Just as importantly, the apertures track across the lenses very closely.

Focus calibration? I aimed the lenses at a ridgeline about 7 miles away and focused with maximum onscreen magnification.

The 16mm fell just a bit short of ∞, by about 1/4 the height of the characters in the distance marking. In other words, instead of the index mark falling in the exact middle of the “INF” engraving, it fell in the middle of the lower half. 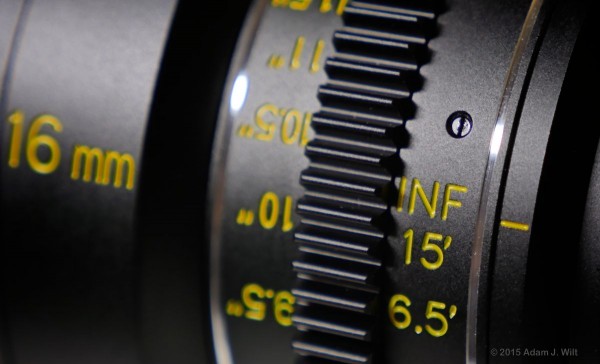 Infinity on the 16mm

This being a Veydra, I can loosen the three setscrews securing the distance scale and adjust it to perfection if I so desire, but I’ll play with it a bit more at a variety of distances before I disturb the factory setting.

What about sharpness and distortion? These are the same as the protos, or (if anything) slightly crisper wide open. The lenses are sharp from wide-open down until diffraction sets in below T8 or so. Stopping down from T2.2 to T2.8 improves contrast and edge detail slightly, but wide-open is perfectly usable and can be intercut with smaller apertures without raising any eyebrows whatsoever.

Anything else? I wasn’t able to detect any backlash in either focus or iris mechanisms.

The 16mm is just a wee bit warmer than the other three lenses: 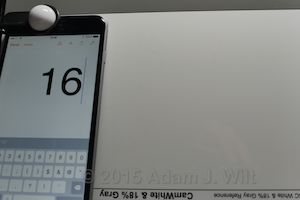 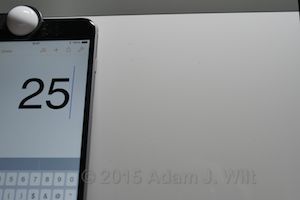 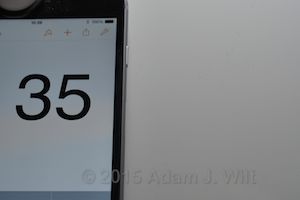 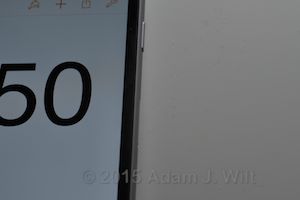 The screw-on lenscaps of the prototypes have been replaced with pinch-type snap-on caps, for faster operation. The caps have “Veydra” in chrome plating across the front. It’s a bit too flashy for my tastes, but just as the bright red “Veydra” on the lens barrel helps you orient the lens in tenebrous on-set environments, so the bling-y lenscap, if always clipped on upright, helps you verify lens orientation when you stuff it into its case. Little things like that reduce fumbling and speed up lens changes. 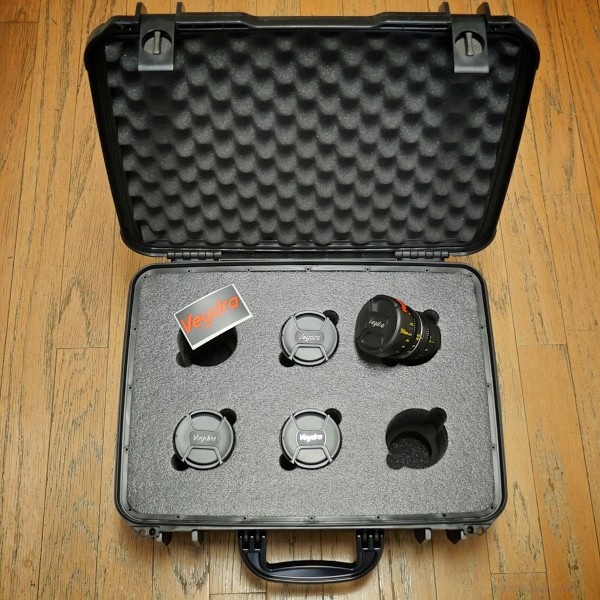 The case, currently $199 from Veydra, is a Seahorse SE-720 waterproof case with custom-cut foam inserts for six lenses: the four lenses currently shipping, a 12mm T2.2 that’s supposed to ship this summer, and a newly announced 85mm T2.2 that’s due at the end of the year.

The case comes with a red Veydra sticker you can apply to the outside if you wish, or you can leave the case unmarked as you see fit (not that it makes much of a difference from a security standpoint; even unlabeled cases like this are as irresistible to thieves as catnip is to cats. At least “Veydra” gets past airport cops more easily than “RED BOMB EVF” or “RED WEAPON” will, grin).

The new 85mm will sell for $899, and can be pre-ordered now, with orders (eventually) filled first-come-first-served.

Veydra has tested the JVC LS300 Super35mm MFT camcorder for compatibility, and says the lenses from 25mm on up cover the full frame while the 12mm and 16mm work with that camera’s variable scan mapping sensor modes.

Conclusions? The Kickstarter gamble paid off: Veydra Mini Primes are real, and live up to the expectations set by the prototypes. Even at the regular price ($900 – $1200 per lens) it’s hard to find any cine primes, new or used, with a comparable value proposition… as long as you’re OK with a micro four-thirds mount.

Disclosure: I bought the Veydra 5-lens set as a Kickstarter backer, and I’ve pre-ordered the 85mm, too. Veydra sent the six-lens case along with the four lenses currently shipping, but I haven’t paid for it yet; I will. (Updated 4 March 2015: I did.)