The Companion notes: Producer/Cameraman John Lubran has been working in the theatre, music, video and television industries since 1972. Established in 1985, Moving Vision is a contemporary video production company whose clients include the BBC and Universal Studios. Moving Vision is located in Llandrindod Wells, in the Mid Wales area of the United Kingdom.

In January 2001, we needed to send a Sony DSR-PD150 on an expedition to the summit of Aconcagua, at over 7,000 metres, the highest mountain in the Andes. We needed protection from the environment but failed to find a suitable protective jacket on the market. The best of which fell short of our needs in terms of both protection and ergonomics, it simply rendered the camera almost unusable when fitted. The only solution was to design and produce our own. 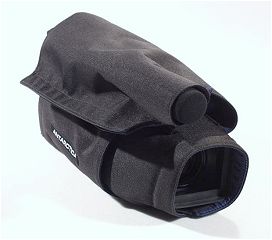 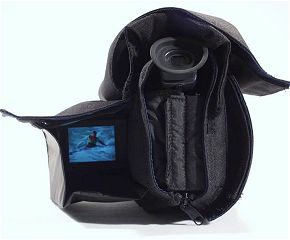 Thoroughly thought through and tested, the Antarctica DV150 camera jacket is now available to everyone who needs to use their Sony DSR-PD150 in rugged conditions or even just outdoors. The Antarctica DV150 provides a high level of protection against knocks, bumps, dust and a reasonable degree of protection against rain and spray too. For serious soakings though, an additional waterproof covering should be used.

The Antarctica DV150 is made from high grade Cordura with a thin high-density lining. Its versatile design provides for every control of the camera to be easily used without compromising protection. Thoughtful ergonomic access allows even the biggest fingers to remain comfortable whilst operating the cameras zoom rocker. 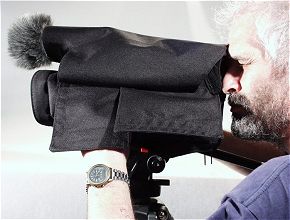 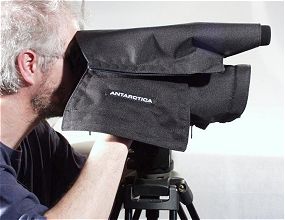 Conditions often allow the cape panel to be lowered, allowing the carry handle, microphone and audio box to be easily accessed. Whether or not the top panel is in place, access to the carry strap is always available, allowing the camera to be hung from neck or shoulder with protection. 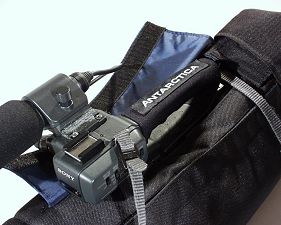 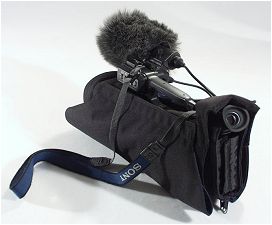 A neoprene glove is provided to give the carry handle extra comfort and warmth. The Antarctica DV150 is priced at £135 plus £23.62 VAT (where applicable) a total of £158.62 including delivery anywhere in the world. See the Moving Vision Equipment Order page for details (larger versions of these images here are available for viewing on Moving Vision’s own Antarctica DV150 page.

Moving Vision will soon be launching a range of high quality support equipment under the Antarctica label soon, including camera jackets for the DSR-PD100 DVCAM and its TRV900 MiniDV stable mate. A range of jackets for most current broadcast cameras, starting with the 9 and 90 series of Sony Digital Betacam and Betacam SX cameras is planned for 2001.