My exploration of the PXW-FS7 large-sensor shoulder-mount camera continues. If you haven’t already seen ‘em, my First Look and Part 2 articles provide background information for what I’ll discuss.

In my First Look article, I said I wanted to move the grip farther forward, and bring it in laterally more towards the camera’s centerline. Sony helped out with the former request, and my local hardware store satisfied the second.

Sony’s Senior Product Manager Juan Martinez shipped me a newer prototype SmartGrip arm (albeit one that has clearly seen some use), which moves the SmartGrip out another inch and a half, and down by the same amount. It also has a couple of plastic clips on the underside of the upper arm for keeping the coiled cable under control: 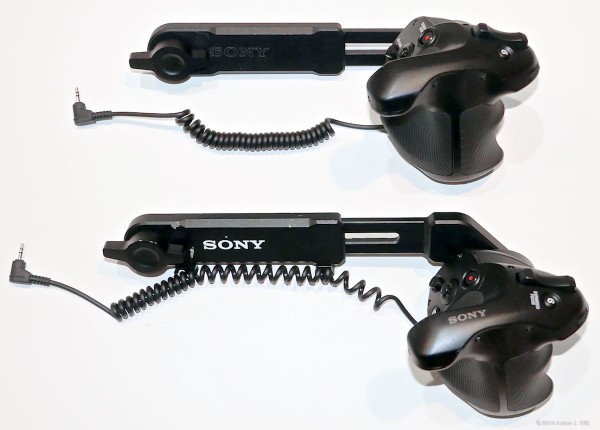 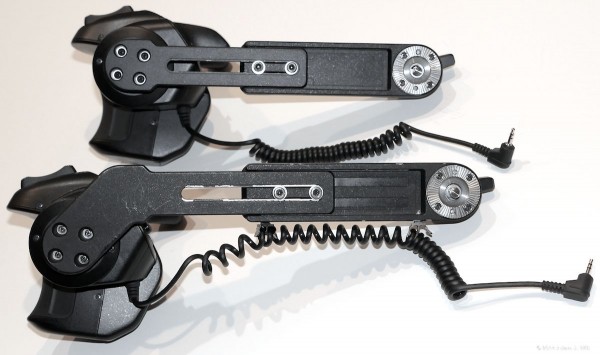 This arm is the one seen in Sony’s Presentation and FS7 brochure (PDF); I’m guessing it’s very close to what will ship with the camera. The longer arm lets me get the grip out just a bit further, and I find it more comfortable to use.

The rig is still off-balance laterally due to the rightward position of the SmartGrip; I either wind up stressing my right hand trying to keep the camera from rolling off to the left, or I spend a lot of my shooting time supporting the camera with my left hand under the lens. I wondered how much difference it would make if I could bring the SmartGrip in towards the camera’s centerline. A trip to the hardware store for some 50mm M7x.4 machine screws ‘n’ nuts and a quick rummage through the parts box for a mess o’ washers gave me the means to find out: 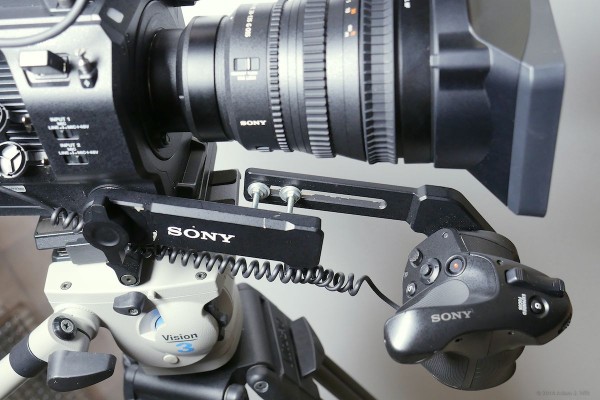 Disclaimer: trained mechanical engineer on closed set: do not try this at home. The offset mounting subjects the tapped holes in the upper arm to shearing and torsional forces they aren’t designed for. I’ve been very careful to handle this rig gently; it’s a proof-of-concept setup, not something I’d stress with the dynamic loads and sharp shocks of real-world run’n’gun shooting. Either Sony or a clever third party will build offset arms that do the same thing but are strengthened appropriately; please use such an arm instead of a jury-rig like this. If you do decide to proceed as I have done, be aware that it will most certainly void your warranty! 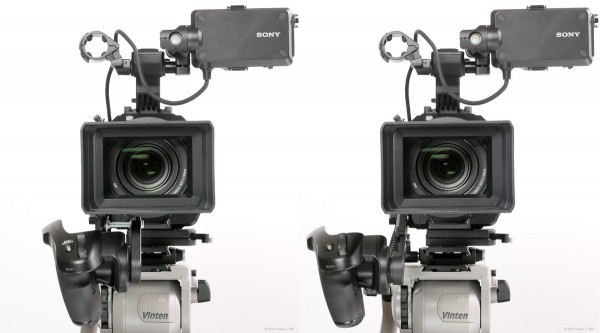 It makes a huge difference. I no longer need to maintain a death grip on the handle to keep the camera from toppling sideways, nor do I need to use my left hand as a support. The camera is still slightly left-side-heavy, which is good: you want the camera to snug up to the side of your head, whereas with a perfectly centered grip the camera would be just as likely to topple rightwards – away from you – as towards you. The right hand’s torsional load is greatly reduced, so the camera can be held upright with just a gentle pressure against the grip. I find I can comfortably work about twice as long with the camera on my shoulder using the offset SmartGrip, regardless of whether I’m using a small, lightweight lens, or the bigger, heavier 28-135mm.

There is one drawback: the offset grip arm can no longer be swung 180º backwards, for use in the “low position” or “waist level” modes seen here, or for more compact packing (see below). That’s a drawback I’m willing to accept for better shoulder-mount balance.

If Sony doesn’t offer an FS7 arm with an offset grip, I’m sure someone else will: Solid Camera, Wooden Camera, or the like.

Both lenses are Zeiss-designed E-mount still-camera lenses, in minimalist back metal housings with finely milled black metal control rings. Both iris and focus are electronic; there is no aperture control on the lens body itself, while the focus ring is free-spinning, without end stops or markings. 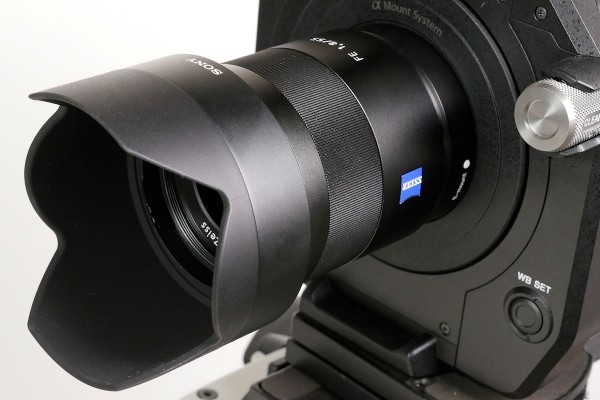 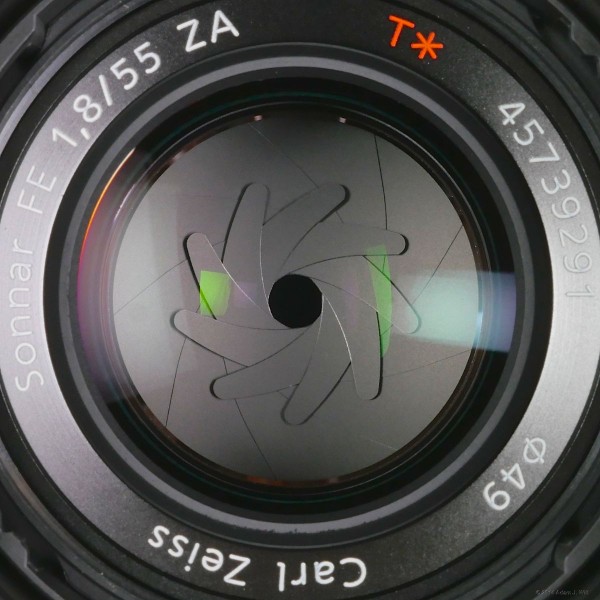 Aside from the not-quite-round bokeh at some apertures, it’s a boringly clean lens (grin). It’s as rectilinear as the day is long (and the day is very long indeed). It’s crisp and contrasty at any aperture. There’s no lateral chromatic aberration to speak of, at least none I could see in a QHD frame. Focus is a rate-sensitive fly-by-wire system: turn the ring fast, and go from near to far in under 90º; turn it slowly, and you can spend more than 180º of travel getting from end to end. I had to aim the lens almost straight into the sun before I saw any flare at all. 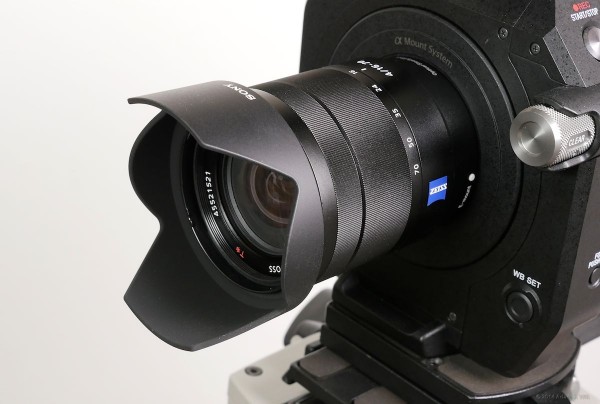 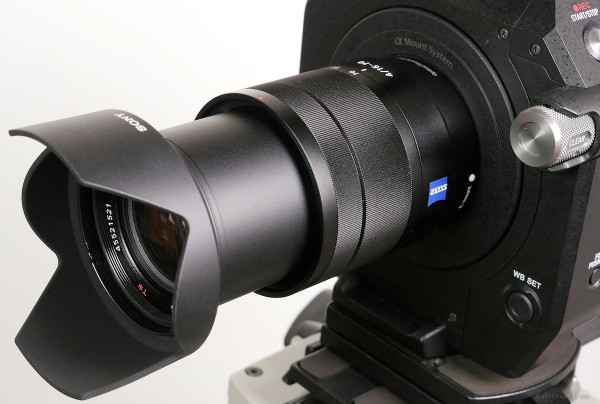 Yes, it’s smaller, lighter, and less expensive than the 16-35mm f/4 we looked at last time. Yet it’s nearly twice the zoom range, and has Optical SteadyShot, too. Why? Mostly the difference is due to the 16-70mm only having to cover an APS-C / Super35mm image circle: not needing to cover full-frame saves a lot of glass. But it’s also not quite as smooth mechanically, and it suffers a bit more at the wide end compared to its pricier stablemate.

The lens has a mechanical zoom ring, turning about 80º from 16mm to 70mm. Like other Sony alpha lenses, the zoom is “backwards” compared to cine / video standard practice (though focus direction on alpha lenses matches cine / video practice). The mechanism isn’t as smooth as on the 16-35mm, it’s stiffer and stickier.

Focus and iris, being software-driven, will lag fast zooms: zoom in faster than about 1.5 seconds end-to-end and the image will dim slightly, while zooming out rapidly causes it to brighten. Snap-zooms go momentarily out of focus until the firmware catches up with you. These characteristics are common across the still-camera alpha zooms I’ve tested; it’s probably best to treat ‘em as variable-focal-length primes rather than lenses you’ll zoom while rolling.

The 16-70mm focal length range works very well for most run’n’gun needs, in my opinion (your preferences may vary), going from nicely wide to sufficiently telephoto for decent portraiture-style work. One thing, though: the lens is so compact that, if you have the FS7’s grip fully extended (as I do), at 16mm you’ll see your right hand and the grip in the shot unless you have the grip lowered at least two rosette notches below the horizontal!

There’s a bit of mustache distortion at 16mm (barrel distortion in the center of the image but straightening out at the edges, almost like dropping the Photoshop “Spherize” filter on an image), but it’s gone by about 20mm or so. For what it’s worth, the 16mm on the 16-70 is a bit wider than the 16mm on the 16-35:

The lens shows a very slight blue/yellow lateral chromatic aberration through its zoom range. By “slight”, I mean “half a pixel, maybe, visible only on high-contrast edges at the extreme corners of the QHD frame, blown up to 200%.”  Aside from that, it’s Zeiss-boring again: crisp, contrasty, almost annoyingly flare-resistant. Bokeh is a bit “busier” than the prime, as you might well expect, but not distractingly so. 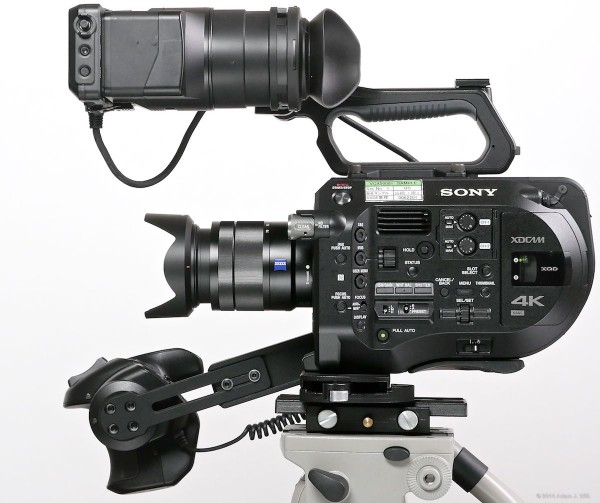 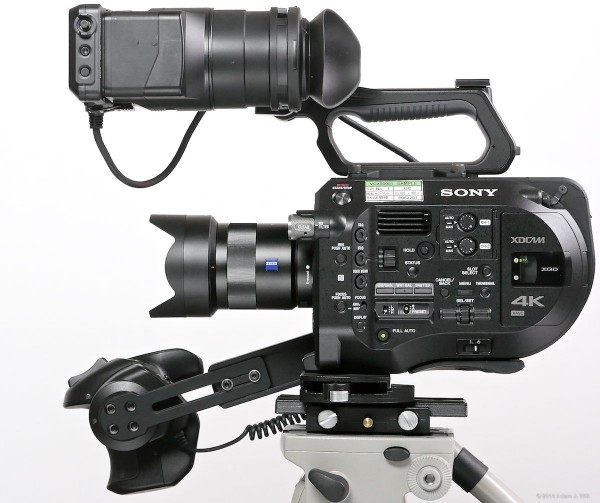 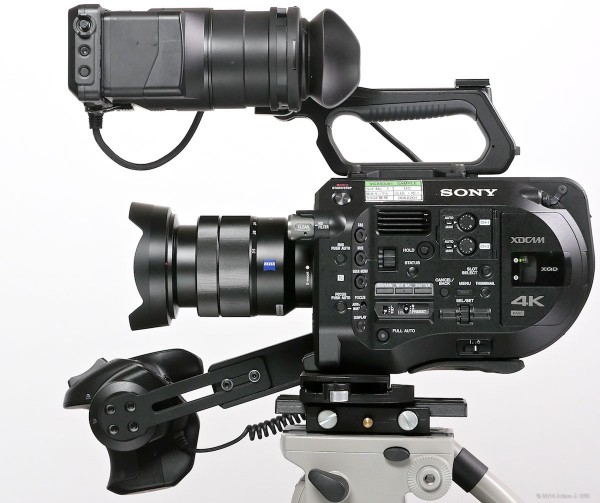 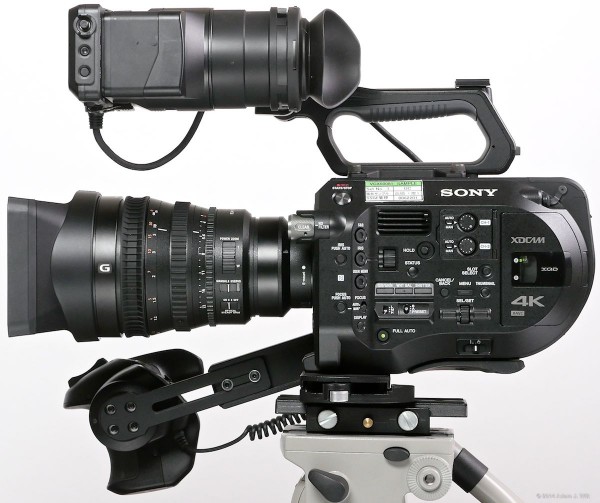 Overall? There’s nothing like going between the big, bulky 28-135mm and the small, lightweight still-camera lenses… to make you appreciate the virtues of a proper video-style lens! The 28-135mm’s smooth, long-throw, repeatable, and predictable zoom, focus, and iris rings are worth the added size and weight of the big zoom. Mind you, there’s nothing displeasing about the performance of the smaller lenses, but the operational differences really stand out when you’re bouncing between stills and video glass on the same camera. I can only hope that Sony follows up with a video-style 16-70mm designed for the FS7. Ah, well, a fellow can dream…

If you have a portable camera like the FS7, you’ll want to take it places. I tried throwing it into a Porta-Brace ENG camera bag: 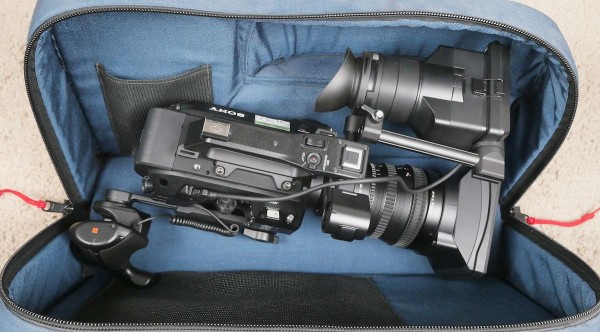 That SmartGrip sticks out so far sideways I couldn’t get the bag closed. I found that taking it off, and rotating the VF down a bit (it’s really big), allowed the FS7 to fit quite nicely.

There’s even room for the FS7’s extension unit to be attached, complete with a big brick battery, before zipping it up to go (I tried it out and it works, though I don’t have the photo to prove it).

Sony says they’re working with bag makers to come up with bespoke FS7 luggage. Juan Martinez points out that if you remove the lens, you can flip the VF down in front of the camera. Combined with rotating the SmartGrip ‘round to the back, you do indeed get a relatively compact little lump: 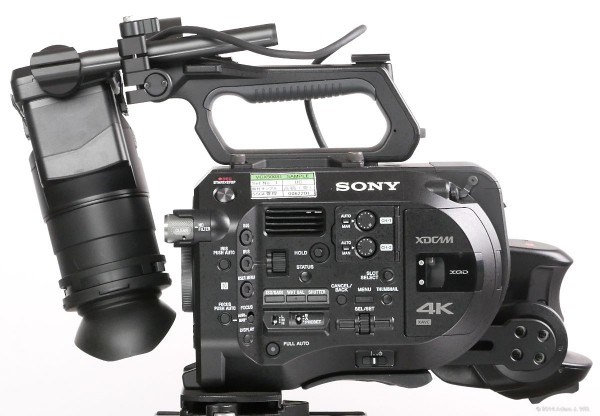 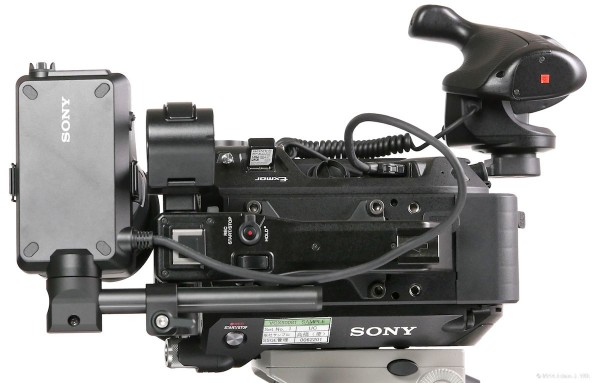 I’ve been running updated (if not final) firmware for the past week or so, and the camera is quite stable and very reliable.

There are, however, a few nagging problems that remains to be fixed.

The SmartGrip’s front dial can be assigned to pull iris, focus, ISO/Gain/EI, or Audio Input Level. It’s a great idea, but the dial’s sensitivity is so low it’s practically unusable. It takes me about five and a half full-finger pulls (where I pull across the dial using the entire length of my index finger) to change iris by a single stop. When using the dial for focus using the 16-70mm zoom, it takes 42 full-finger pulls to get from M.O.D. (about 0.3 meter) to 1 meter; 63 to get to infinity. Quite simply, whatever I’m shooting isn’t going to wait around for me to use that dial; it needs to be lot faster in operation before it’ll be useful.

The VF has a “focus bar” indicator that grows larger as the image in the central part of the screen is focused better. Its update rate is so slow – 3fps – that it’s unusable for real-world work: life moves too fast to spend entire seconds focusing. Fortunately the VF’s peaking overlay is both good and realtime (and it works with focus magnification engaged, too), so the focus bar indicator isn’t a necessary aid.

These should all be fixable in firmware updates if they aren’t already fixed when the camera ships.

The side-heaviness of the stock-handled rig can be alleviated with an offset SmartGrip (if I can prototype it with $3 worth of hardware, it can’t be that tough to do).

And if the big viewfinder is bothersome,  the Zacuto Gratical HD EVF should be available early in 2015.

Heck, solve all these problems, and I won’t have anything left to complain about!

Disclaimer: Sony sent me a prototype FS7, extension unit, and two – erm, make that four – lenses for review, but Sony hasn’t provided any payment or other material compensation for writing this article. All the gear has to go back to Sony, too.