Do sensors have a native color balance? What does that even mean? I’ve got a theory… read on!

When the original RED One M camera was released, RED stated that the native color balance of the sensor was 5000K. At the time it had never occurred to me that sensors had native color balances. I knew that older prism cameras seemed to be natively balanced for 3200K because they had a filter wheel containing an 85 or 85B daylight-to-tungsten color correction filter that we had to use when shooting day exteriors. This was back in the days of black-and-white viewfinders, and it was common for rookies to shoot daylight for a while before realizing they hadn’t actually rotated that filter into place! The Sony D50 was the first “pro” camera I used that had a digital 5600K button  that corrected the color electronically, without using a filter wheel, and I distrusted it completely because of this. “What witchcraft is this,” I thought, “that they think they can correct daylight to tungsten without a filter?” Little did I know that tungsten was the real problem, and daylight color balancing was relatively easy.

In those old days it was common knowledge that the blue channel was always the noisiest, although for the longest time I never understood why. It took a little lesson in the native response of silicon to lightwaves before I caught on. This web page points out that silicon is sensitive to wavelengths of light from 300nm (UV) through 1100nm (IR) while the human eye only sees from about 400nm (deep blue) to 700nm (bright red), so it’s fair to say that silicon is most sensitive to IR, or light we can’t see anyway. A further complication is that silicon sensors “see” when light passes through a red, green or blue filter and strikes the photosite underneath, creating an analog voltage response that is then measured as “light,” but long wavelengths (red and IR) penetrate more deeply and result in higher voltages while shorter wavelengths (blue and UV) penetrate less deeply and result in lower voltages. In short, silicon “sees” red much more easily than it “sees” blue. (And, if we consider how sensitive silicon is to longer wavelengths that we can’t see, it’s ironic that we shave off the part of the spectrum it’s most sensitive to and leave behind what we’re most sensitive to!)

Tungsten light contains a lot of red light and not much blue, and it turns out that’s why the blue channel is always so noisy: in order to make the blue signal strong enough to white balance with red and green it’s necessary to add approximately 6db—or two stops—of gain (power) to boost the blue signal. If you take an already shaky signal and increase its strength artificially you’ll enhance all of its defects too. In this case the main defect is noise.

Years ago I shot a test with a Sony F35 and proved that silicon sensors are much more “balanced” under daylight than they are under tungsten light. I shot a test chart under both kinds of light and saw that under tungsten light, which contains lots of red and not much blue, the red channel was very clean and blue was very noisy, while under daylight the opposite was true: red was a little noisy and blue was very clean. It occurred to me that RED’s statement that the sensor was balanced for 5000K might have to do with noise.

The following are frames that I captured recently from a noise test shot on a Sony F55. I capped the lens port, did a black balance and an APR (“automatic pixel replacement”) pass, and then recorded black to XVAC in SLog2 at several different white balance presets. Here’s what I saw when I pulled the footage into Da Vinci Resolve: 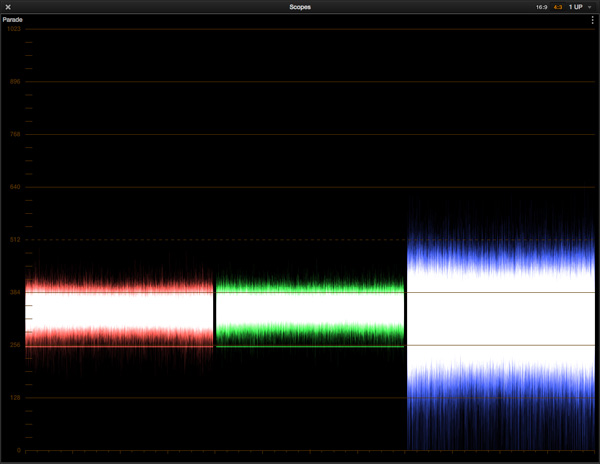 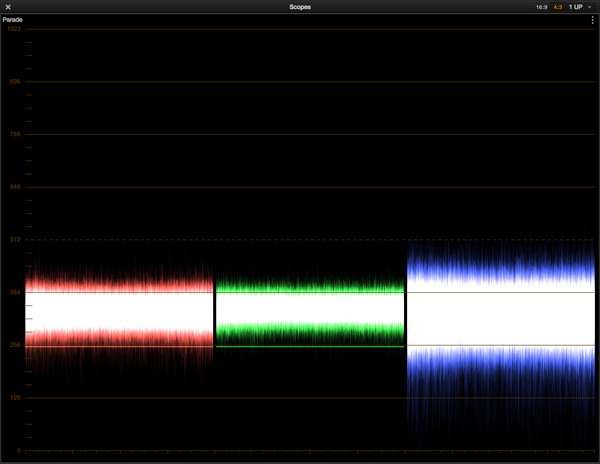 4100K, or midway between tungsten and daylight. Blue is less noisy, red is a little noisier. 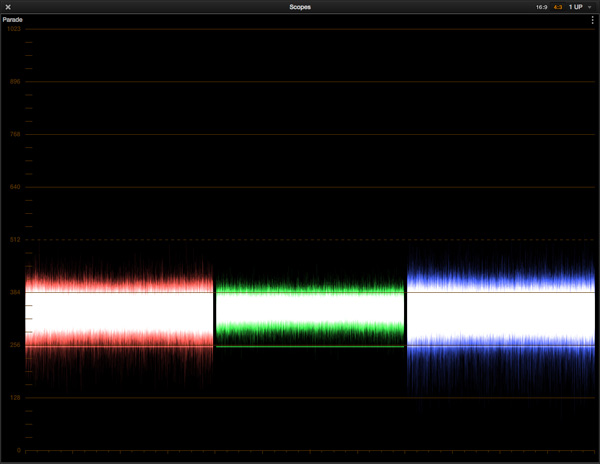 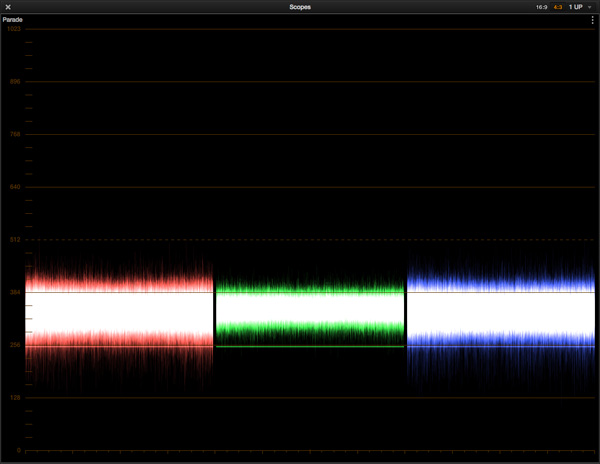 6500K, or a little cooler than daylight. Red and blue noise are nearly equal. Red might be a little bit noisier.

As you can see, the cooler the light is the more balanced the red and blue channel noise becomes. Blue becomes tamer under daylight because, while silicon is less sensitive to blue light, daylight consists primarily of blue light so the blue channel gets a LOT of exposure. There’s less red light in daylight than in tungsten light so the red channel becomes a little noisier as the signal needs to be boosted a touch.

Arri’s “Alexa FAQ” states that while their sensor doesn’t have a “native” color balance the least gain is added to the color channels at around 5600K. That’s consistent with what we see above with the F55: under daylight the red channel gets a little bit of a gain boost while blue doesn’t need any. (Green is always the cleanest channel as single sensors that employ a Bayer or other mosaic pattern typically have twice the number of green photosites as red or blue. More color samples equals less noise overall.)

RED is a bit of a special case because the M and MX sensors show significantly better color response under daylight than tungsten, while most other cameras respond to both types of light more or less equally. There are some common differences that can be seen easily on a vectorscope, where colors containing red show a lot more “punch” under tungsten light while blues “pop” under daylight and HMI light, and this page at Arri’s website shows this effect fairly well visually. I’ve seen this effect on nearly every camera I’ve worked with. Most of the time the differences are very subtle, but they are generally present. They almost never make any creative difference at all (RED cameras, pre-Dragon, are the exception to this.)

So if you’ve ever wondered what “native color balance” means, the answer appears to be that it’s the color temperature of light where the least amount of gain, or amplification, is needed to boost the color channels so they are the least noisy they can be. For every camera I’ve tested this is always closer to daylight than tungsten, but the difference is rarely noticeable. Modern cameras are so quiet and their built-in noise reduction is so good that you have to push them pretty hard before noise becomes an issue. Just be aware than when someone says “But such-and-such camera is really ‘daylight balanced'” that this isn’t unusual… because, in effect, they all are. That’s just the way silicon is.