Every Sunday before the show opens, Sony has a booth tour for VIPs. The Sony folks kindly allow me to tag along, as long as I don’t publish before 9am Monday morning. Herewith, some (only some) of the cool stuff you’ll be hearing more about as the show opens and people get their eyeballs ’round the new kit.

Warning: I’m typing this all from memory; I think I have all my facts straight, but I wasn’t taking notes. Any errors are mine alone. Apologies in advance for any such. 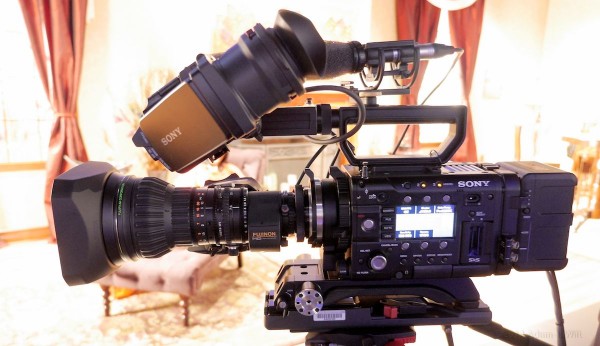 An F55 wearing a broadcast lens? 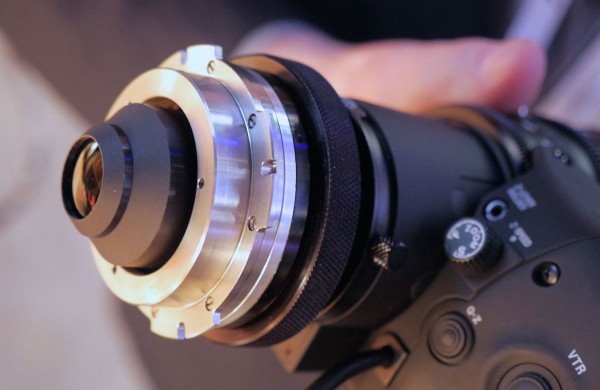 With the “B4-S16-PL” adapter (not necessarily its final name), a 2/3″ broadcast lens can be attached to the F55’s PL mount, with the image circle expanded to cover the super-16mm-like 2K crop mode of the F55’s sensor. 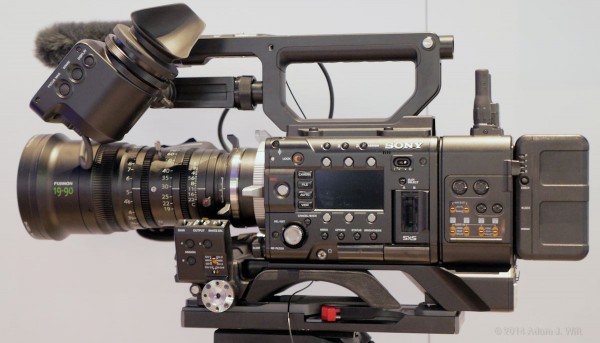 Watch out, Amira: The F55 build-up kit for ENG/EFP-style operation.

The F55 “build-up kit” (also not necessarily the final name) is a “sled” adapter an F55 snaps into: a baseplate with a sliding shoulder pad; a rear module with a wireless transmitter slot, ENG-style audio controls and I/O, and Hirose and D-tap power outlets; and a front module with ENG-camera switch panels putting switches exactly where an ENG cam op expects to find ’em, a front microphone input, and a 12-pin lens control port. 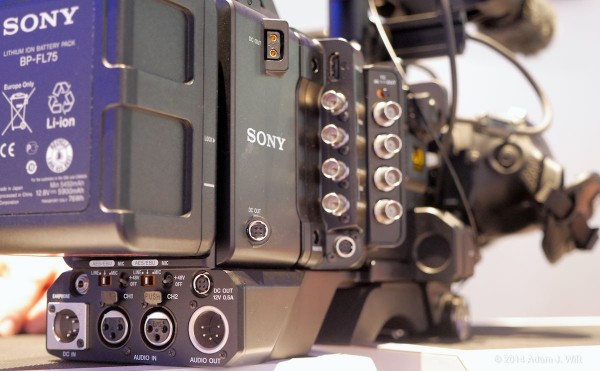 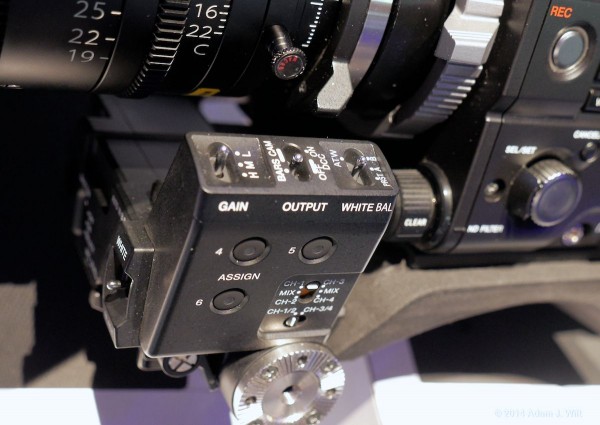 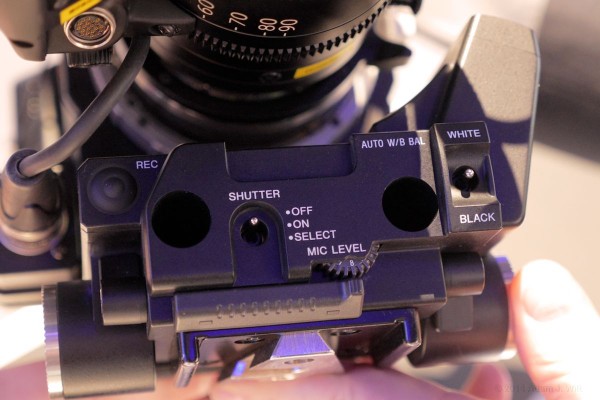 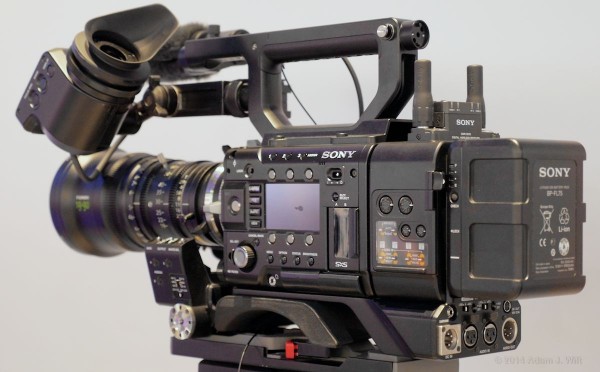 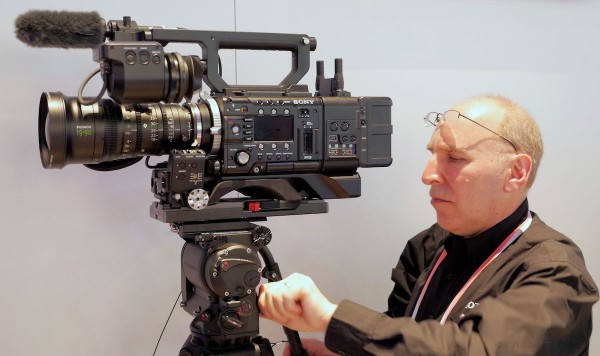 It’s not a particularly small or lightweight package, especially with that Cabrio on it. With the B4-S16-BL adapter and a suitable ENG lens, it’d be a bit more manageable.

Again, I narrowly avoided breaking a camera before it was even built: as I swung the display camera onto my shoulder,  I placed my right hand on the forward switch panel to steady the camera. “Don’t grab that!”, I was admonished; the mockup isn’t as robust as the final shipping product will be. No matter: the switch panel did not come off in my hand and it remains intact for all to see (unless someone more ham-handed than I am got to it after I was done). And I can confirm that the critical switches are all right where they’re supposed to be for any 2/3″ broadcast camera operator to drive it, without any muscle-memory problems whatsoever. 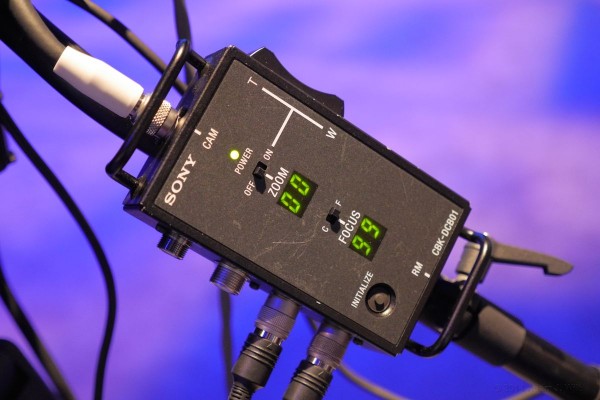 This little box sits between the F55, a Cooke /i lens data port, and a remote controller, allowing full remote control of zoom, focus, and iris from ENG/EFG-style controllers (as opposed to a film-style FIZ controller). On the demo camera, standard video-style lens controllers ( a zoom rocker on the right tripod handle and a focus wheel on the left) happily ran the lens. 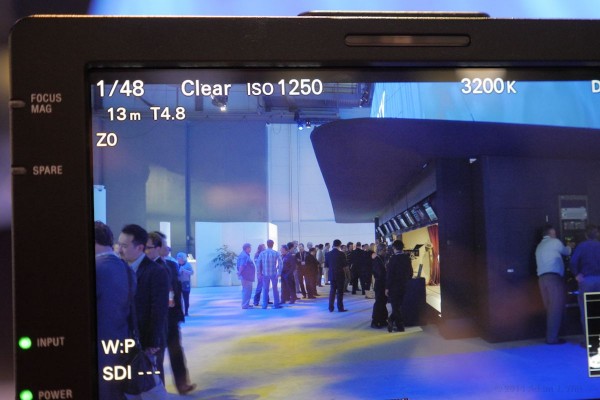 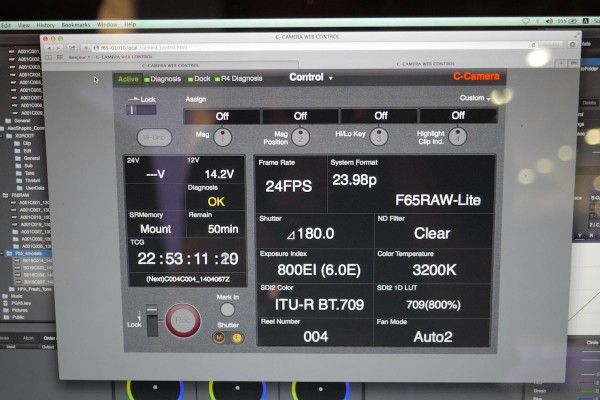 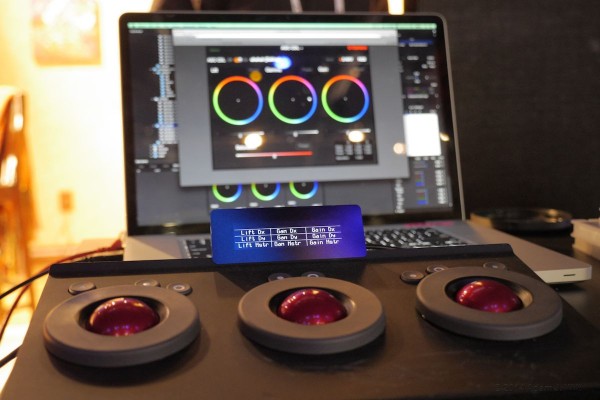 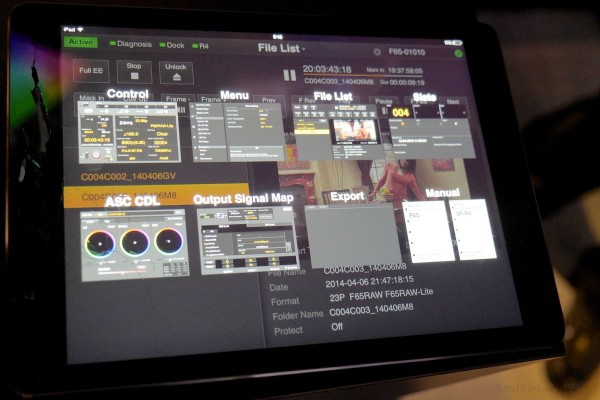 All of this remote goodness is available on iPads, too: configuration, control, grading, playback, and even a built-in copy of the ops manual. 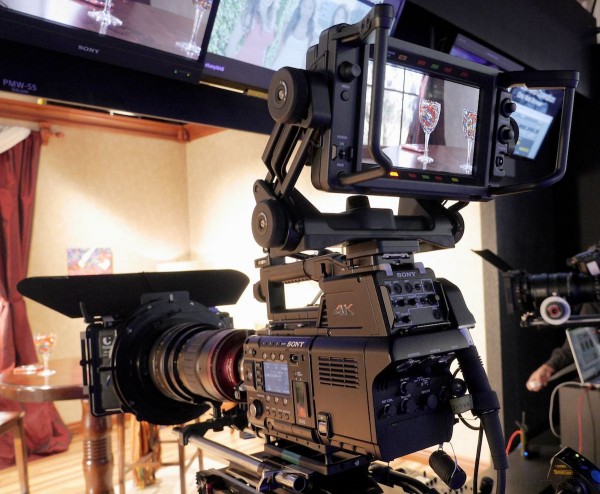 A new adapter for the F55 lets it be used like any other studio camera. 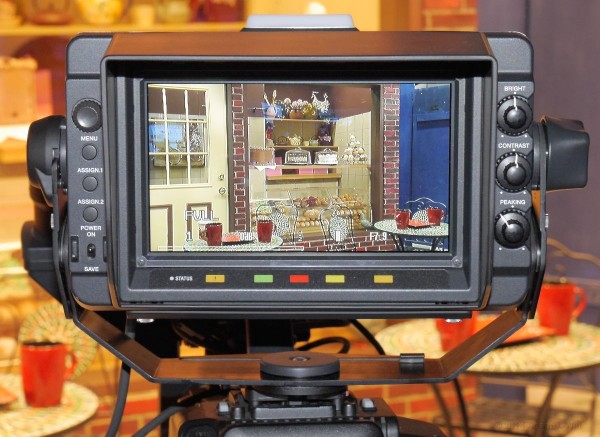 A new 7″ LCD monitor, using the same panel as in the L700 LCD for the F5/55, is oriented towards studio / sports style operations. 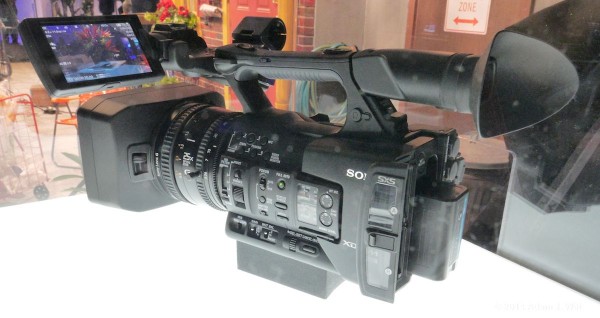 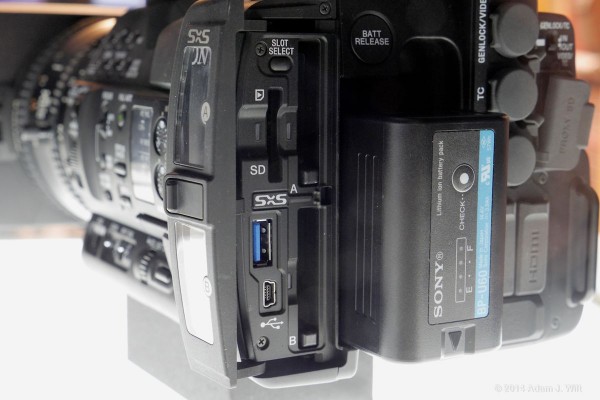 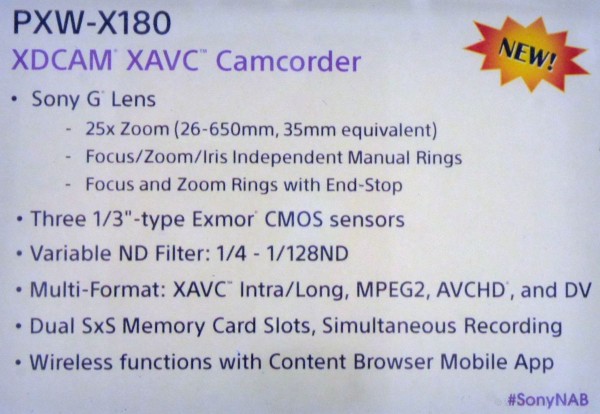 It’s not all about 4K: This SD/HD handheld is the latest mutant offspring of the PMW-EX1 and the NXCAM lines (more or less), with a fixed 25x G lens, multiple formats recordable on SxS cards, wireless control, and an internal, variable (!) ND filter. It’s under glass, so it’s a prototype… shipping when? “Soon, Only Not Yet!” Yes, the SONY folks actually said that… and laughed. 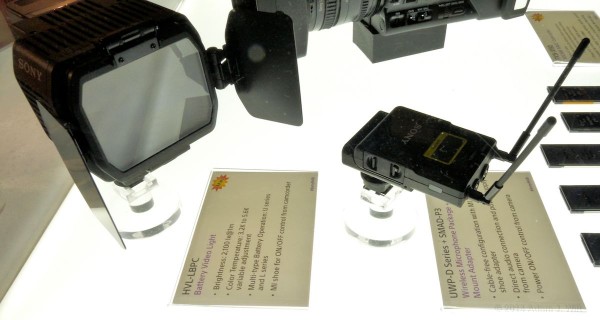 That PXW camcorder has a new intelligent “MI” hotshot, into which this video light and wireless receiver can be plugged. 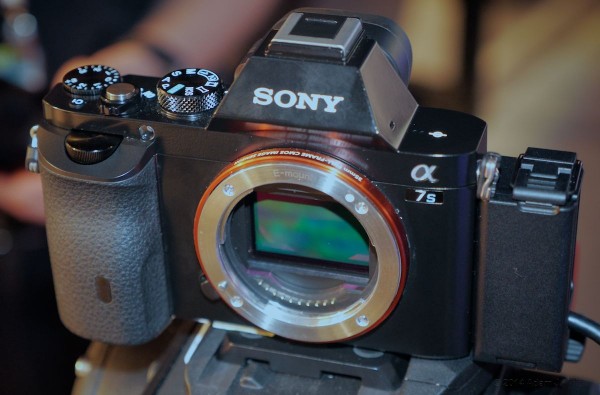 The Sony Alpha 7S – yes, the 7S, not the 7 or the 7R. What’s the 7S? It’s another prototype, a variant of the Sony’s current full-frame E-mount mirrorless camera. This one is designed around 4K: its 12 Megapixel sensor shoots pixel-for-pixel 4K video with no line-skipping or binning. And, having only 12 Megapixels on a full frame sensor makes those pixels BIG: excellent low-light, low-noise capability is the result. The camera includes all sorts of video goodies: gamma control (including S-Log2), black gamma, knee, S-Gamut color space, timecode, and more.

It’s freakin’ tiny.  If you haven’t seen an alpha 7 in the flesh (elegant magnesium flesh, at that), you probably think it’s bigger than it is (BTW, that dingus hanging off the side is a clip-on cable guard; it’s not even part of the camera body). In every single dimension, it was smaller than my GH3 is, despite having a full-frame sensor in it.

But being so compact comes with a price: no internal 4K recording. 4K video is sent out HDMI to an external recorder; Atomos is showing 4K capture from a 7S here at the show.

Shipping when? Not yet decided.

One more thing, for those here at NAB: Sony will be having a CineAlta celebration at the Mirage, Monday night after the show floor closes, until… um… late, some time. 4K projection! Food! Drink! Open to all! If you’re interested, stop by the Sony booth for details… or just take a chance and show up at the Mirage unannounced (it is Vegas, after all; do you feel lucky?).

Disclosure: Sony kindly let me in to see the new toys, but provided no other consideration, blandishments, or payment in return for the publicity. And they didn’t even sneer at my Panasonic still camera the whole time I was there – mighty decent of them, I must say.