This is a brief demo clip with Steadicam Pilot and my Canon XH A1, shot available light, camera on fixed focus and auto-iris.

I focused mostly on incorporating extensive booms into this sequence to make full use of the Pilot arm. The second shot starts fully boomed down, laterally tracking across the table. This is a tough maneuver to pull off with a less capable spring arm as they tend to require a lot of force to hold in the lower position especially when performing a slow, subtle move like this. I then boom up across the chairbacks, follow Amy into the living room and then boom back down again as she sits, slowly creeping in on her with the arm back in its lowest position — again, this would be very challenging to pull off smoothly if you were required to muscle the arm to hold it in place.

I didn’t note the focal length on the close-up but it was probably the equivalent of 100mm (35mm cine format). Moving closeups can be great with Steadicam — I made this one extra hard for myself due to once again being at the bottom of the arm.

The next shot concludes with my climbing up onto the sofa (something I would not be thrilled to do with a full-size rig!); the trick to making the big step invisible is to start booming up on the arm first and keep it tracking in a straight line through space as your body makes the abrupt move underneath it. Incidentally this is also the secret to making shots on stairs appear continuous, especially if the steps are irregular or broken up with small landings. The final frame required the rig to be fully extended in front of me, tilted all the way to horizontal to push it out over the side wall of the stairs. This sort of shot is one that you want to execute with a slow drop time (3+ seconds) because it would be very hard to hold that tilt with a notably bottom heavy rig and not have the effort appear in the shot. 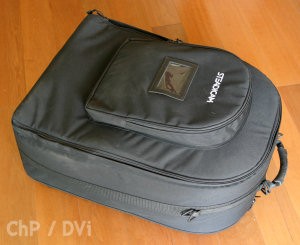 Above: the handy Pilot backpack.

This was my first “legitimate” shoot with the Pilot, a good learning experience but next time I will endeavor to use a lighter touch as I see some horizon issues, probably due to over-controlling the rig. Those migrating from the handheld rigs like the Merlin or Glidecam will be used to applying miniscule force and will surely be delighted with the added inertia of the Pilot.

Links to large versions of
the images in this article:

Image 3: The Pilot with A1, balanced and ready to go.

Image 4: All supplied weights up on the top stage. Also shows fore/aft and side/side controls, and detail of docking pin.

Image 7: Making a side-to-side pitch adjustment on the socket block.

Charles Papert S.O.C. began his Steadicam career with a clunky homebuilt rig in the early 80’s and eventually found his way to Los Angeles, where he works on features and episodic television.

Although his current rig is neither clunky nor homebuilt, it also happens to not be a Tiffen Steadicam® product and he is not compensated by them to endorse their gear.