Veydras are cine primes designed primarily for micro four thirds cameras, though they’re also available with C- and E-mounts. I tested prototypes of the first four lenses—16mm, 25mm, 35mm, and 50mm—in December 2014; customer shipments commenced in February 2015; the 12mm appeared in prototype form in late April and shipped in September. Now I’ve had a chance to look at the prototype of a new 85mm T2.2. 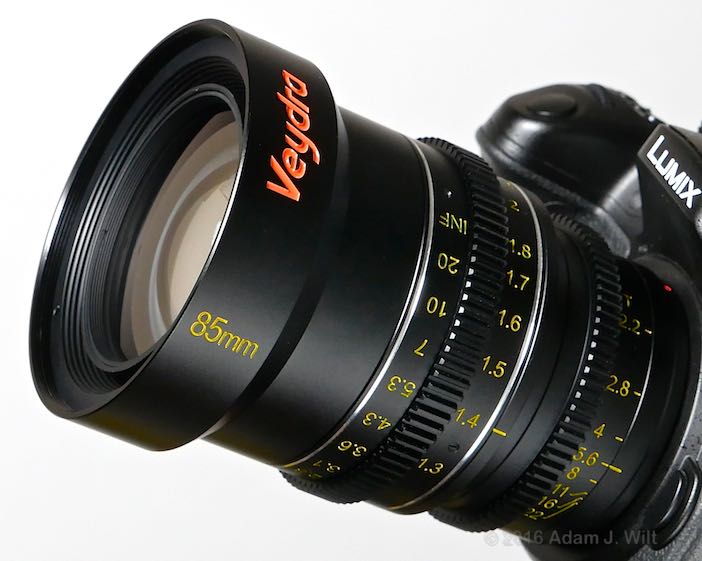 In overall form it’s just like the other Veydras, only longer:

Most of the primes are about 88mm from front to flange, but the 85mm is 110mm long. In an earlier life I assembled a prime set for a RED camera package, and the functional equivalent to the Veydra 85mm in that package was the Ultra Prime 135mm T1.9. The other Ultra Primes in the kit were all 91mm long, while the 135mm was 119mm long. It seems that there are Patterns in The Fabric of The Universe, and “the long lens in the set will be bigger” is one of them.

Length aside, all the critical dimensions match other Mini Primes: 77mm filter thread, 80mm outside diameter, consistent placement of 0.8 cine pitch focus and iris gears, long-throw focus (about 270º of rotation end-to-end). Yes, you’ll have to shift your mattebox when going between the 85mm and the other lenses, but your follow focus and lens support needn’t move, and the same filters and mattebox donuts will work with all the Mini Primes.

At 1.75 pounds the 85mm is somewhat heavier than its stablemates, which run between 1 and 1.2 pounds (weight info from Veydra; I haven’t weighed the lenses myself, though the 85mm does feel heavier than the others). The weight and center-of-gravity changes aren’t huge but if you’re on a gimbal or Steadicam you will definitely have to rebalance with the 85mm.

This particular sample has a metric focusing scale: 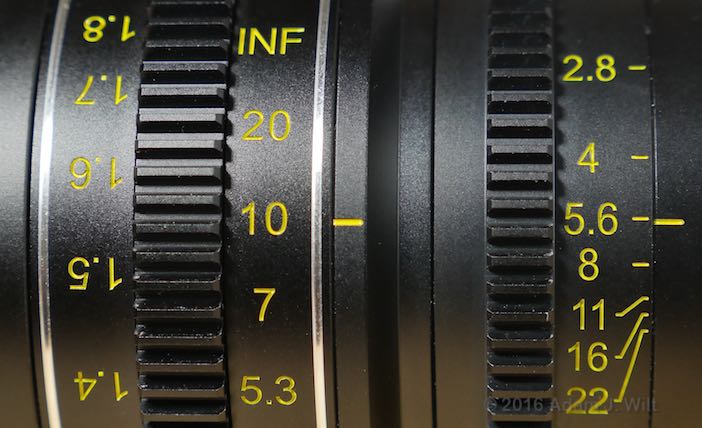 The left side of the metric 85mm

As with other Mini Primes, the apertures tend to bunch up at the small end of the scale, but since MFT-sized images suffer from diffraction-induced softness from T8 on down, it’s not a serious usability issue. Also as with other Mini Primes, there’s a focus scale on both sides of the lens but an aperture scale only on the left side; the right side is blank and featureless: heaven help you if you need to tweak iris from the right (one of these days I’m going to scribble my own aperture scales on the right sides of my Veydras).

The lens is dominated by the large front element; this is the biggest hunk o’ glass in the Mini Prime lineup. 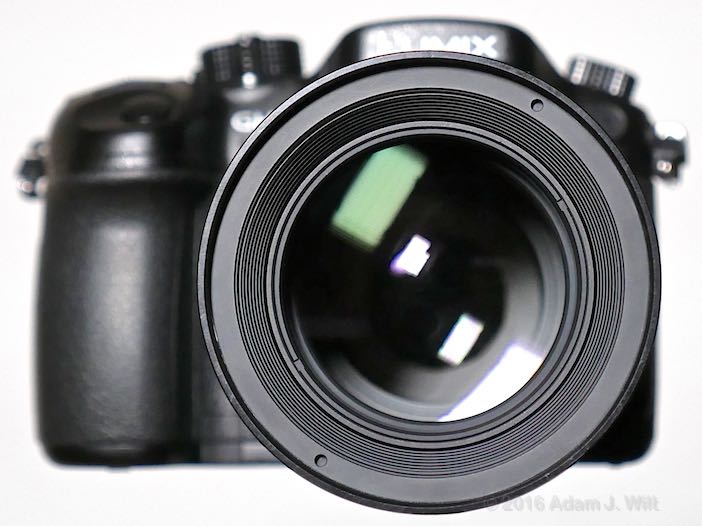 Behind it is a ten-blade iris with curved leaves: 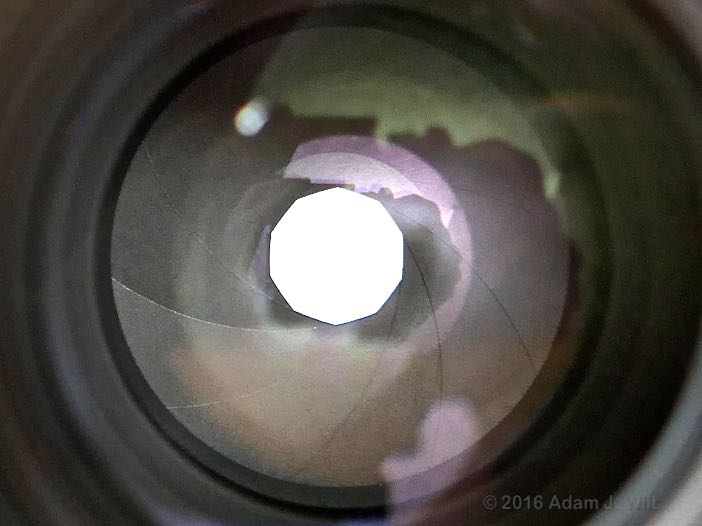 TL;DR version: the 85mm performs just like the other Veydras, so much so it’s downright boring. And that’s a good thing.

The lens captures a crisp, contrasty image with no noticeable lateral chromatic aberration. The image is flat as a pancake: I couldn’t see any distortion at all, not so much as a single pixel’s deviation in a straight line running along the edge of the picture.

The sweet spot for the 85mm is from T2.8 to T5.6, where its images are razor-sharp. At T2.2 the image is softer, if only slightly; as you close it down to T8 and below diffraction takes its toll. These pix were shot with the full 16×9 frame of a GH4 in stills mode (thus full-sensor width at 4608 x 2592), default sharpening, with no post-processing, and a 1:1 pixel-for-pixel extract was cut out for reproduction here:

Again, the 85mm behaves just like the other Veydras (and all lenses on a MFT sensor will lose sharpness due to diffraction at smaller apertures: ye cannae change the laws of physics!).

There’s no discernible difference in sharpness between the center of the image and the corners.

Wide open, there’s some brightness falloff in the corners, maybe 1/3 – 1/2 stop, but close the iris down to T2.8 and the illumination is flat edge-to-edge and stays that way down to T22:

The 85mm is just a shade more magenta in its rendering than the 25mm, 35mm and 50mm primes, but it’s not nearly as magenta as the 12mm and 16mm are yellow. The difference is so minor it’s only barely visible when cutting back and forth between two otherwise-identical shots if you’re looking for it: 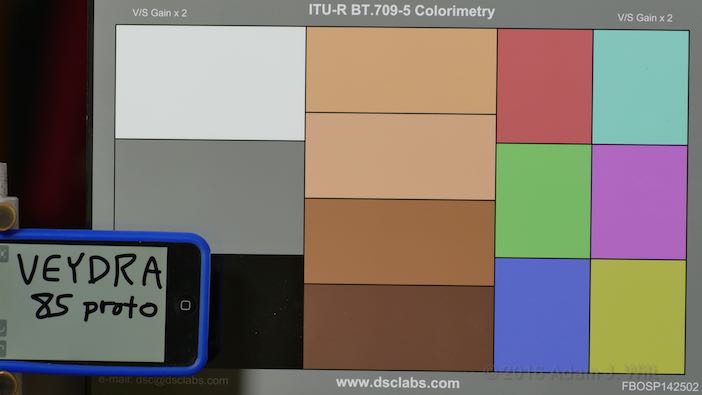 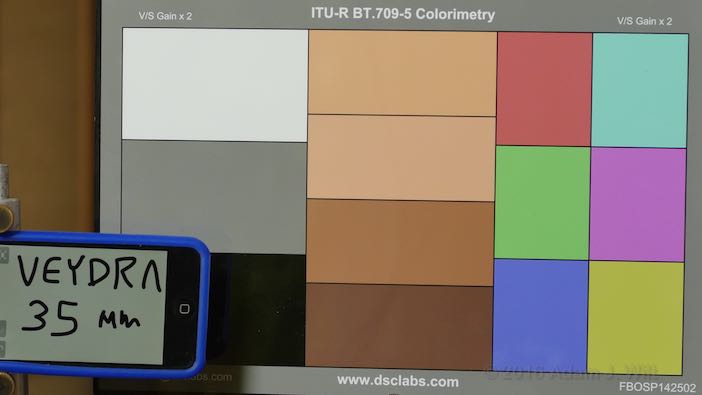 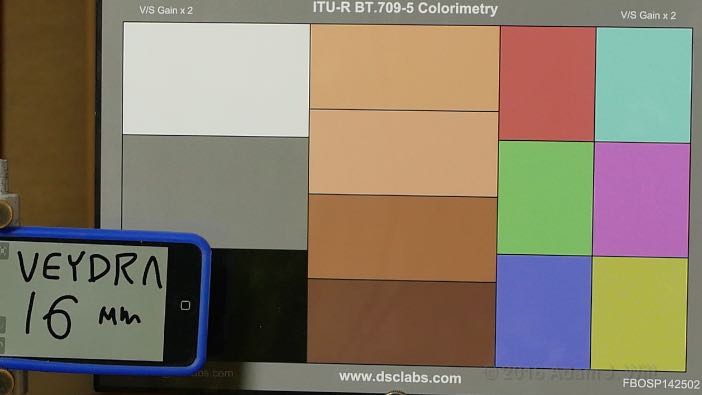 [Tripod moved slightly between 85mm shot and 35mm shot, but the lighting (Kinoflo-Diva Lite 400 with K55 tubes) is the same in all three images.]

The 85mm flares just like the other Veydras, too (I said it was boring, didn’t I?): not a lot of sunstars and internal reflections, but a substantial amount of veiling flare from bright sources just out of view. Your mattebox flags and eyebrow are just as useful with the 85mm as with the other lenses in the set.

Bokeh is beautiful: smooth, blobby, round out-of-focus areas with no texture or busyness, with minor cat’s-eye squishing towards the corners of the image. (Unfortunately I neglected to grab any frames while I was looking at bokeh, so I have nothing to show, sorry.)

Near focus is one factor where the 85mm varies from its stablemates. The closest I was able to get was about 4’1”, which gave me a subject magnification of about 1/3 – 1/4 of what I saw with other Veydras.

I’m told that the 85mm’s image circle is “approximately 33mm”, sufficient for the coverage for APS-C (26.8mm diagonal) and various “Super35mm”-ish sensors (26–30mm diagonals), making it a viable lens for E-mount as well as MFT mount applications.

I should note that this particular 85mm is a raw prototype, not a shipping lens. The focusing mechanism has some backlash and the aperture scale is about 1/3 of a stop off, except at T2.2. Veydra’s Ryan Avery assures me that these are mechanical issues with the prototype, and that production lenses will not be so afflicted, while the optical performance I saw should be the same in the shipping glass. Assuming that’s the case (and similar assurances he made regarding other prototypes were kept), the 85mm looks like a worthy addition to the ranks.

Disclosure: I backed the Veydra Kickstarter project and purchased a set of the first five Mini Primes for use on my GH4s. Ryan Avery at Veydra sent me the 85mm prototype to look at, but has not offered me any special deals or other inducements for a favorable review. The prototype lens has already been shipped back to Veydra.