This page shows a lot of data contained in several charts and tables.
It is best viewed on a laptop or desktop display. 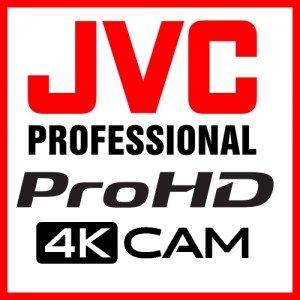 Streaming live video to the internet has been a core feature of JVC Professional camcorders since the introduction of the GY-DV300 Streamcorder back in 2002. Streaming capabilities have evolved with the advent of the JVC ProHD line of High Definition camcorders in 2005 and their 4KCAM series of Ultra High Definition camcorders which launched in 2014. This page covers seven current ProHD and 4KCAM camcorders. Jump directly to a particular section with these links:

This guide is primarily targeted to the U.S. market and I have listed U.S. prices. The “where to buy” links on this page refer to DV Info Net site sponsors, all of which are U.S. dealers. At this time I do not have a dealer outside of the U.S. as a site sponsor. However, some dealers such as Adorama and B&H Photo Video will ship overseas to just about anywhere in the world. Currently there are four companies to whom DV Info Net refers sales enquiries for JVC Professional 4KCAM and ProHD series camcorders:

When ordering from B&H Photo, be sure to check their holiday schedule and hours of operation. Precision Camera and Texas Media Systems are full-line JVC Professional dealers, but they do not list everything on their sites. Even if a purchase link is not available here, you can still order the camera if you contact them directly by phone or online.

The forward slash data separator “/” indicates a difference between models within a column. In the lens row, the equivalent 35mm focal length range in millimeters is stated in parenthesis, followed by the filter thread diameter. The focal length range is approximate due space constraints in the chart. The linked brochures for each camcorder go into more detail about various technologies and features. The video row gives only the maximum resolution and frame rate for that model; all of these camcorders offer a variety of resolution and frame rate options. The same is true for the format row. The number before the format, such as 50 MOV, indicates the maximum bit rate in megabits per second. In the included and optional battery rows, the figures in parenthesis to the right of the battery model numbers are the approximate endurance in hours and minutes for typical recording with the LCD screen open. Mouse over the metric weight value to see the Imperial equivalent in a pop-up.

All are single-chip Ultra-High Definition camcorders with 12.4 Mp 1/2.3-inch CMOS image sensors, except for the LS300, which has a 13.5 Mp Super 35 CMOS sensor. All include a removable top handle which houses two XLR audio inputs and controls for two channels of audio. All have two SDHC / SDXC card slots for dual recording, relay recording and backup recording. All record MOV or AVCHD files, in Full HD up to 120p and 4K at 30p or 24p. All record Full HD up to 50Mbps or 4K at either 150Mbps, which requires UHS-1 U3 cards or faster, or 70 Mbps. All except the LS300 have an integrated Fujinon 12x optical zoom lens with autofocus, image stabilization, neutral density filters, dynamic zoom capability and dedicated manual focus, iris and zoom rings. All except the HM180 have FTP and a Zixi engine providing real-time Full HD live streaming capability up to 12 megabits per second over 4G LTE, 3G, WiFi and Ethernet. All have SDI output. 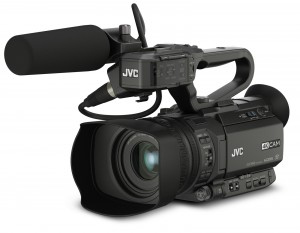 An updated version of the previous JVC 4KCAM GY-HM200, the new HM250 is a compact camcorder that records 3840 x 2160 Ultra-High Definition video at 150Mbps or 70Mbps to dual SDXC cards and streams Full HD video at 12Mbps live to the internet. The HM250 incorporates a special feature previously limited to the former GY-HM200HW House of Worship variant model — the ability to add a full-screen graphic, a lower third, a logo “bug” or a watermark overlay directly to the video while recording and / or streaming live. Other new features include 4:2:2 recording for 4K 30p and 24p, and 4K 60p over the HDMI output. It has a tele macro shooting mode for improved focus on close objects, and a new Zero Config function enabling automatic, single-click setup when it joins the same local network as other cameras.

A variant model of this camcorder, the GY-HM250SP for sports production, has the added capability to embed live scoreboard data automatically via ScoreBot from SportzCast, or manually over WiFi via smartphone or tablet using software provided by JVC. The realtime score overlay can go out over the live stream with or without simultaneously recording to video. Otherwise it is the same as the HM250.

The less expensive GY-HM180 is the same camcorder as the HM250 except it does not include live streaming capability, FTP, or web-based remote control. It uses a different battery type (7.2v) than the HM250 or 300 (7.4v). The HM180 also has an SDI jack, which is an upgrade over the previous model HM170. 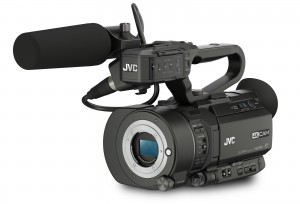 The “LS” in this model number stands for Large Sensor. This is the same camera body as the GY-HM200 (the model previous to the current GY-HM250), with the built-in 12x lens removed. In its place is a Micro Four Thirds lens mount, compatible with a broad variety of third-party glass. Behind it is a larger Super 35 sensor made by AltaSens. This sensor has a unique feature called VRSM (variable scan mapping). This allows the retention of native angles of view for Super 35, Micro Four Thirds and Super 16 lenses without vignetting. Another benefit of VRSM is a feature called Prime Zoom. When used with an MFT prime lens, it dynamically re-maps pixels without resolution loss in order to “zoom through” the image area of the prime lens. The range of the minimum to maximum scan area is adjustable through the camera’s zoom rocker, providing a 1.2x zoom in 4K or a 2.3x zoom in HD. This camera offers 17:9 Cinema 4K and Cinema 2K modes with true 24p. Otherwise, it is identical to the HM200 with regard to live streaming capabilities and all other features. Overseas this camcorder is sold as the GY-LS300CHE. 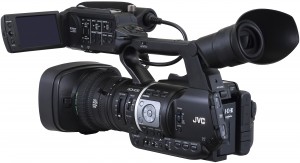 The GY-HM660 is a portable three-chip 1/3rd-inch Full HD handheld camcorder intended primarily for live television sports and news production, although it is fully capable of serving a wide variety of other video production applications. It is smaller and lighter than its shoulder-mount ProHD cousins, but it features the same high-quality live streaming stability as the large cameras, using the SMPTE 2022-1 protocol for forward error correction. It has an integrated Fujinon 23x optical zoom lens with autofocus, image stabilization, neutral density filters, dynamic zoom capability and dedicated manual focus, iris and zoom rings. Remote control is available over LANC or IP. Remote viewing is available over IP, allowing one person to operate more than one camera at a time. IFB return audio capability allows the smaller HM660 to dovetail into an existing large camera ENG pool.

A variant model, the GY-HM660SC, integrates seamlessly with the popular XOS Thunder HD sports coaching system. It synchronizes the system’s biometric and positional player data with GPS time-stamped video and automatically streams it to the XOS server platform. Otherwise it’s the same camcorder as the GY-HM660.

The less expensive GY-HM620 does not include live streaming capability, GPS, return audio, FTP, web-based remote control, the ability to record the MXF file format, or the ability to write different file types during dual card recording. It has a single FALCONBRID processor.

The JY-HM360 is a lower priced single-chip version of the HM620. Not available in North America, it was introduced to Europe and Australia in Jan. 2017 and is targeted directly at the wedding market. The sensor is an 18.9 Mp 2/3rd-inch CMOS. It has an image-stabilized 10x optical zoom with a max. aperture of f/1.2 at full wide and f/2.8 at full tele and extends to 19x with Dynamic Zoom enabled. This lens has a 46mm filter thread diameter and the aperture is controlled via thumbwheel instead of a dedicated iris ring. There’s no SDI jack but otherwise it’s the same camcorder as the GY-HM620.

In Europe and Australia the ProHD handhelds are sold as the GY-HM620RE and the GY-HM-660RE. 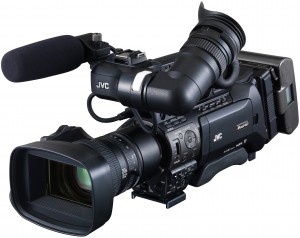 The HM850 and 890 continue the unique JVC ProHD form factor of their compact “half-height” shoulder-mount three-chip 1/3rd-inch interchangeable lens broadcast camera systems, first introduced in April 2005 with the GY-HD100. The base kit for both of these cameras includes a Fujinon 1/3″ bayonet-mount 20x zoom lens with autofocus and optical image stabilization. There are other packages available which pair the cameras with faster Fujinon or Canon 1/3″ manual-focus broadcast video lenses, or just the camera itself without a lens:

With built-in live-streaming capability and broadcast lens options, these cameras are popular choices for television news stations, and they are currently used in a significant percentage of Designated Market Areas across the United States. They are built for field production, but JVC offers a variety of accessories, such as the FS-900 MultiDyne fiber optic system, RM-LP25U console remote, and the KA-790G studio sled which transform the HM890 into a fully capable studio camera.

The only physical difference between the HM850 (above left) and the HM890 (above right) is that the HM890 includes an HD-SDI pool feed input jack and a 68-pin expansion port for studio use, while the HM850 does not have these connections. Both cameras offer HD-SDI output, GenLock, TimeCode input and output, and are otherwise identical with regard to streaming capabilities and all other features. In short, the HM850 is a television news field production camera, while the HM890 is the same camera equipped with upgrades for easy integration into a television news studio environment.